One Soldier Reveals the Most Important Lesson He’s Ever Learned

In the midst of a tense ambush in Iraq, a soldier recalls his father's valuable lesson. 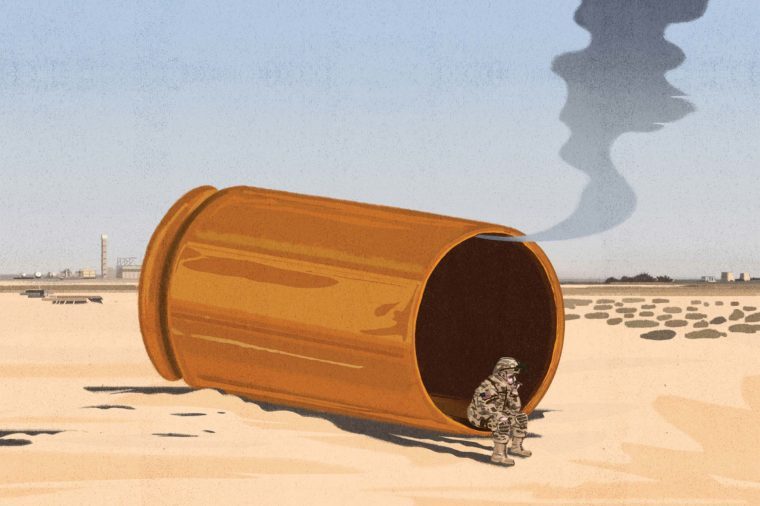 I remember the first time I ever pointed a weapon at someone with the intent to kill them. The experience was very different from how I had imagined it would be—far more ambiguous, confusing, and subjective. The training scenarios and exercises had never really covered situations like the one I found myself in.

I hadn’t been in Iraq that long, maybe 60 days. My assignment: gunner for a troop transport vehicle known as an MRAP. There were 30 or so troops in the platoon, and our mission this evening was a reconnaissance patrol taking us to the edge of our battle space, the dividing line between the areas of responsibility for military units. That was where the bad guys tended to collect, much in the same manner that the space between tiles in a bathroom collects mold and grime.

For this assignment, we were the Mr. Clean. The plan: look around, talk to the locals, try to winkle out some actionable intelligence, and then start kicking the hornets’ nest. Depending on where we went, this was either super successful (quite a few of the locals actually hated the insurgency) or a total bust.

The village had only one road in. Just like so many other stories in Iraq, bad things happen when you are at the far end of your leash, late at night, on the only ingress/egress route. As we mounted up to head back to camp, I heard some of my buddies muttering, “Ugh, we are getting hit tonight.” I tried (and failed) to play it cool. We’re getting hit? I was excited and nervous. These guys had been here longer than I had and clearly knew what was up, but they seemed strangely unconcerned by it. “Getting hit” was spoken of in the same tones as “It’s gonna rain” or “We’re gonna be late.” An inconvenience, but not the end of the world. For a green kid on my first deployment, “getting hit” was a pretty big deal! I hopped into my turret, checked my machine gun, secured all my other gear, and settled in.

It turns out the grunts were only half right. About one mile out of the village, our lead vehicle slammed to a stop. It missed running over a pressure-detonated IED (think of a mousetrap wired with three artillery shells) by mere feet. The platoon sergeant prepared to call for the explosive ordnance disposal unit to come remove the bomb, but the platoon leader cut him off. The leader had had enough. Too many IEDs, too many broken vehicles, too many broken men. He issued a new order: Dismount a squad, to be led by the leader, to take cover and watch the site. He then ordered the vehicles pushed back half a mile and hidden in a ditch beside the roadwith the engines and lights off. We were to wait and see whether anyone came to collect the IED. 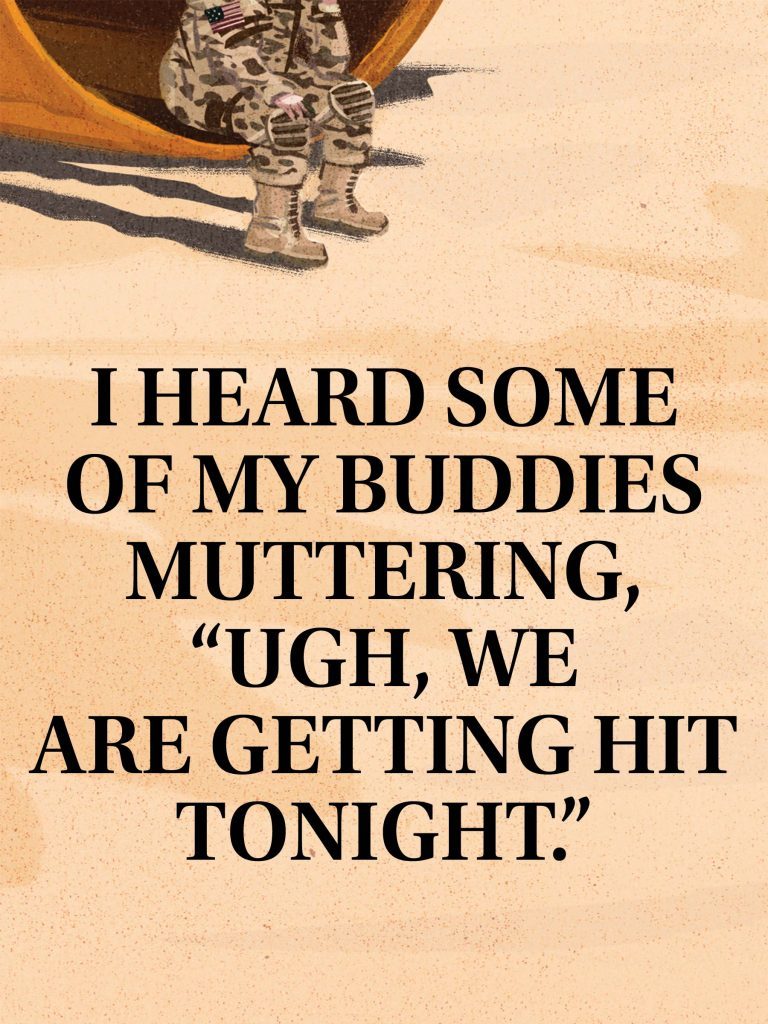 After we pulled back, my vehicle was positioned in a depression with just the turret peeking out at ground level. We shut everything down and settled in for a long night. After about three hours, through my night vision goggles I saw a pickup truck exiting the village. This wasn’t all that unusual in itself, but the vehicle was traveling across the field, not on the road, with no lights on. Naturally, this twitched my mental antennae. The vehicle was a little over a mile away and heading in our direction. Over the intercom, I let the vehicle commander know that we had company incoming. He passed the word to the platoon sergeant, who passed it to the platoon leader, who was on the ground near the IED.

At about 1,500 meters, the order was given to me: “If they get within 300 meters, engage at your discretion.” It was that simple. No warning shots, no flares, no second chances.

Waiting for the vehicle to approach the 300-meter mark was the longest 15 minutes of my life. “At your discretion” wasn’t something I heard very often as a 21-year-old specialist. I was being given the power of life and death over the occupants of that truck, and they didn’t even know it.

But what played through my mind, over and over, was a lesson my father had taught me ten years before: When you pull the trigger, the consequences are yours—forever. 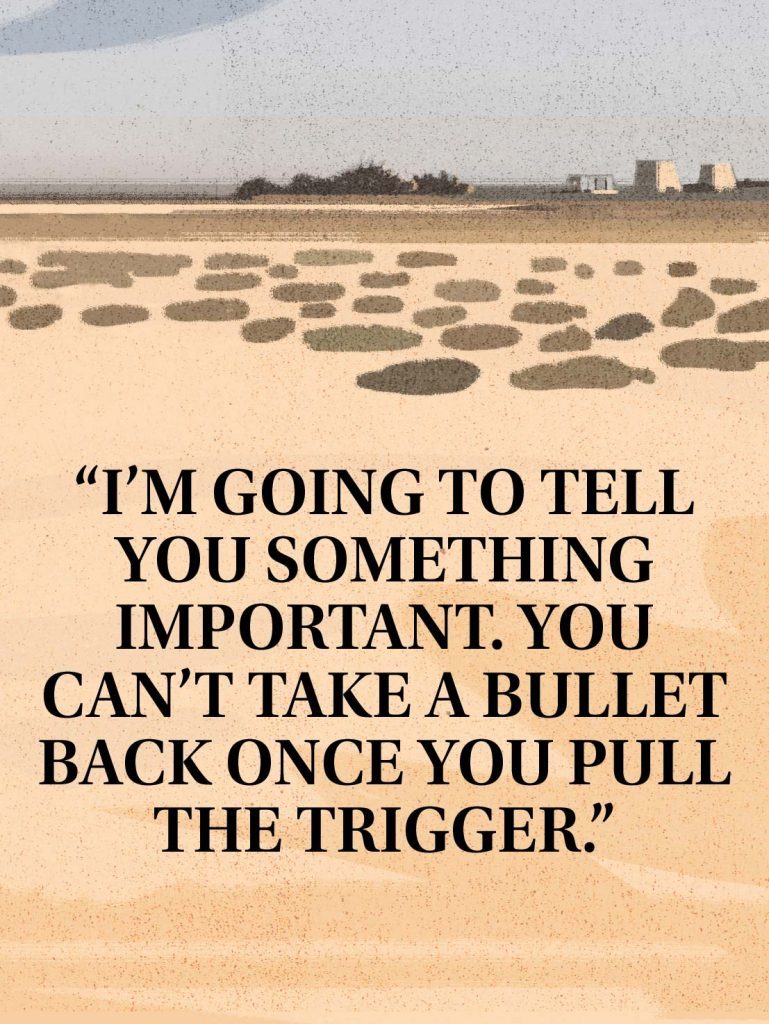 When I was a boy in Sandwich, Massachusetts, I became interested in firearms and hunting and asked my father to take me shooting. After some haggling with Mom, he agreed. I remember sitting down at the dining room table prior to heading to the range. He had removed some rifles from the safe in the basement and instructed me on their proper handling. After I gained his confidence, he fixed me with his loving, firm gaze and said, “I’m going to tell you something very simple but very important. You can’t take a bullet back once you pull the trigger.”

He didn’t even blink. “No, you don’t. I mean this. You can’t take a bullet back. Once you pull the trigger, it’s forever. It’s not a movie; it’s not a video game. No matter how many times you say ‘I’m sorry,’ ‘It was an accident,’ ‘I didn’t mean to,’ that bullet Never. Comes. Back. Do you understand?” He reached out and squeezed my shoulder. “I’m not trying to scare you, but rifles are for men, not boys. If you take this, and we go shooting, you need to accept responsibility every time you pull the trigger. Every bullet. Forever.”

I nodded my head. I remember tearing up because the enormity of what he’d said had finally gotten through. I’d have the power of life and death over other people. It’s an awesome and terrifying responsibility, and the person I loved and wanted to impress most in the world had entrusted me with this responsibility.

That night in Iraq, I performed mundane little tasks as the last five minutes of the lives of those strangers in the truck ticked down. Checking the safety, straightening the ammo belt so the rounds would feed correctly and not jam, securing my earplugs, spitting out my gum. Over the radio, I checked my clearance to fire. The platoon leader broke in with a yelling whisper: “Check fire, repeat, check fire. DO NOT SHOOT.” That was weird, I thought. I popped back up to check the truck. Still coming.

Suddenly, a loud burst of machine gun fire erupted from the squad situated near the IED. Tracers arced across the night sky from the ambush site, past the truck, low, fast, and deadly. A few scattered rifle shots barked out. Then silence. The truck cut a sharp turn back to town and roared off. Our MRAP raced to where the ambush had occurred, spotlights piercing the darkness, guns up and out. Two men—dumped from the truck—lay on the ground, one twitching and bleeding. The platoon medic kept them alive until a medevac helicopter arrived and ferried them to a hospital.

Though I never learned who they were or what they were doing, I was 90 percent sure that night, as I am now, that they were coming out to pick up the IED and use it later. The other 10 percent of me sometimes wonders. If I had shot, regardless of who was in the vehicle, under the rules of engagement I would have been cleared legally. Ethically I believe I would have been cleared, too, given the circumstances. Morally, I’m not so sure. Morally, I believe we answer to a higher power than rules of engagement, or even the letter of the law. Morally, I believe someday I’ll be called to account for the things I’ve done or neglected to do. Some days, I’m not sure whether I’ll be able to do that.

What I am sure of today in my early 30s—the same way I was sure of it on that moonless March night when I was 21 and when I was a wide-eyed child at my family dinner table taking in one of life’s most important ­lessons—is that once you pull the trigger, you own it forever. Because the bullet never, ever, comes back.