Your Guide to a Mount Rushmore Road Trip

Get ready to marvel at this iconic American attraction and so much more on a road trip to the Black Hills of South Dakota.

Think that a Mount Rushmore road trip is just about staring at some faces on the mountain? Think again! There are so many things to do in Mount Rushmore and the surrounding area that you could easily spend a week here—it can be one of the most memorable road trips you take. Read on to find out where to go, what to do, and how to plan the perfect road trip to Mount Rushmore. Also, make sure you know these essential road trip planning tips before heading out.

Where is Mount Rushmore?

Mount Rushmore is located in South Dakota’s Black Hills region, which gets its name from the Lakota phrase Pahá Sápa, which refers to the dark appearance of the tree-covered mountains from a distance. About 40 miles from Rapid City, Black Hills National Forest is not only home to Mount Rushmore but also to Wind Cave National Park, Custer State Park, Crazy Horse Memorial, and numerous other historic sites and national monuments. By the way, this is how Mount Rushmore and other iconic American landmarks got their names.

The history of Mount Rushmore 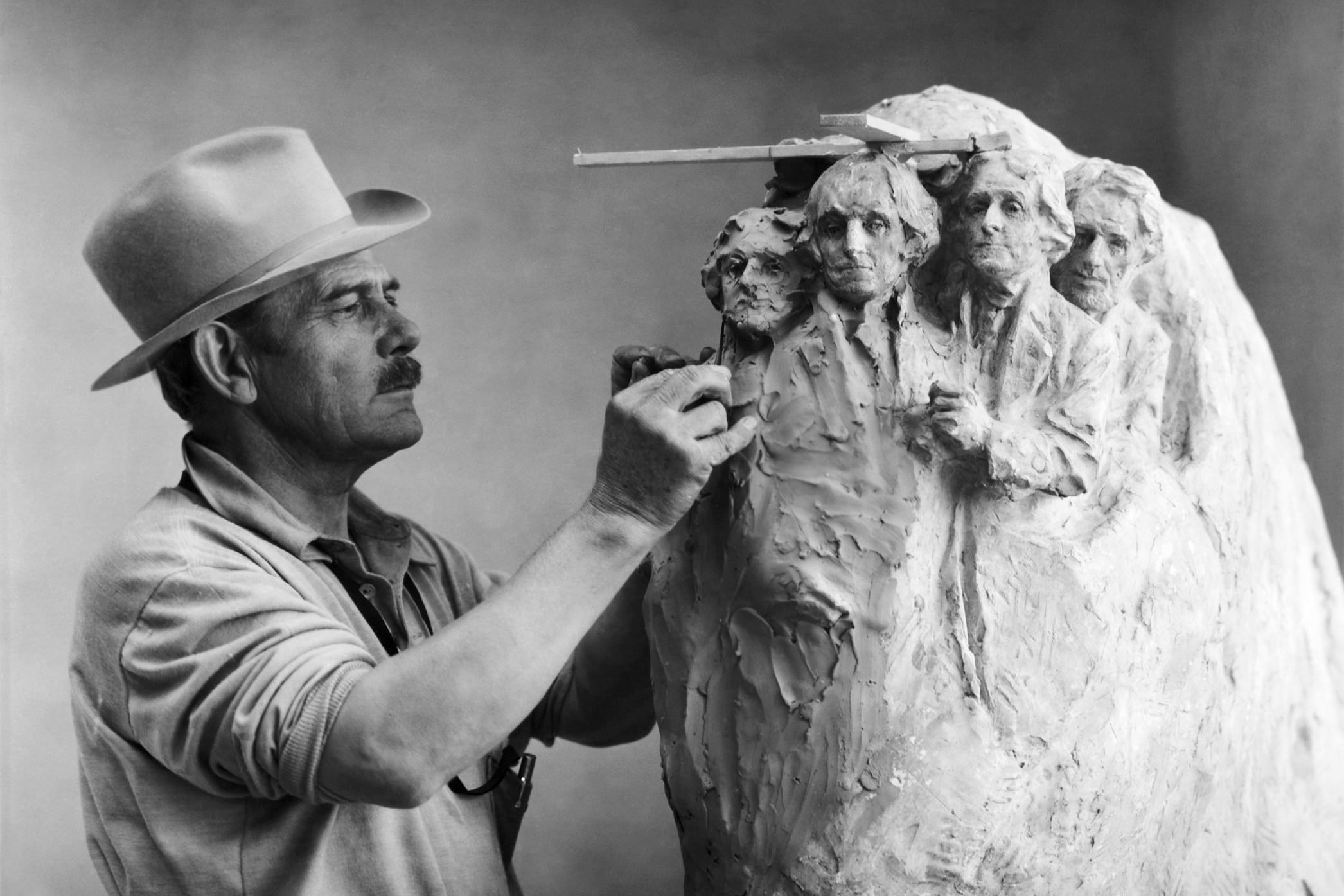 Mount Rushmore was a colossal project that took 14 years and nearly 400 workers to complete. Drillers and carvers climbed 700 stairs every day to punch in on a time clock before being lowered by cables over the 500-foot face of the mountain to begin work. South Dakota’s state historian commissioned the monument to begin construction in 1927 and originally intended for it to include Native Americans and American frontiersmen like Lewis and Clark. However, the main sculptor, Gutzon Borglum, pushed to include only the faces of four U.S. presidents: George Washington, Thomas Jefferson, Theodore Roosevelt, and Abraham Lincoln.

But there’s more to this patriotic tribute than you might realize, and in fact, Mount Rushmore has a complicated history. Borglum had strong ties to White supremacy, so it is not a surprise that the monument features two presidents who were slaveholders. Between that and the fact that the site occupies Black Hills land that was stolen from Native Americans after gold was discovered in the area, controversy has surrounded the monument from its inception. Though the Supreme Court sided with Indigenous people over the case in 1980, the land has not been returned to the tribes.

What to do at Mount Rushmore 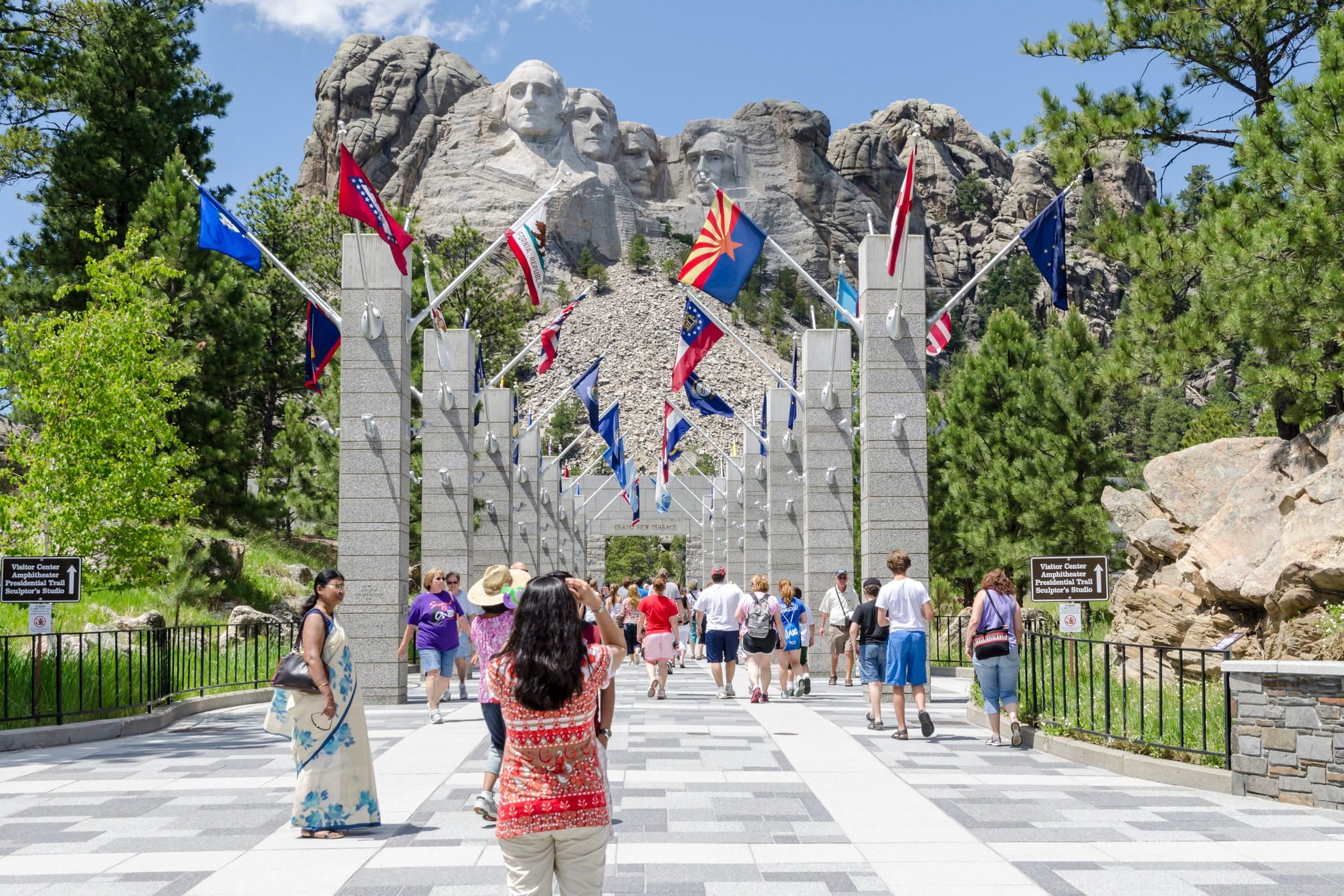 As soon as you arrive at Mount Rushmore, the presidents’ faces will be immediately visible. On your way up to the monument, you’ll walk through the Avenue of Flags, where you can spot your state’s flag and learn when it was admitted to the Union. Though you’ll definitely want to snap some photos with the flags and famous faces, don’t forget to head downstairs to the museum to learn about the history of the site and to see images and videos of its construction. Also check out these unique photos of Mount Rushmore, taken by one of the men who carved the monument. Though you can snap a picture of the monument within five minutes of arriving, you’ll want to allow about an hour and a half to explore the museum and other buildings on site. And an important note: A trip to Mount Rushmore typically isn’t just about things to do in Mount Rushmore. Since you won’t be spending all that much time at the memorial itself, here’s what else you can pair with this road trip. 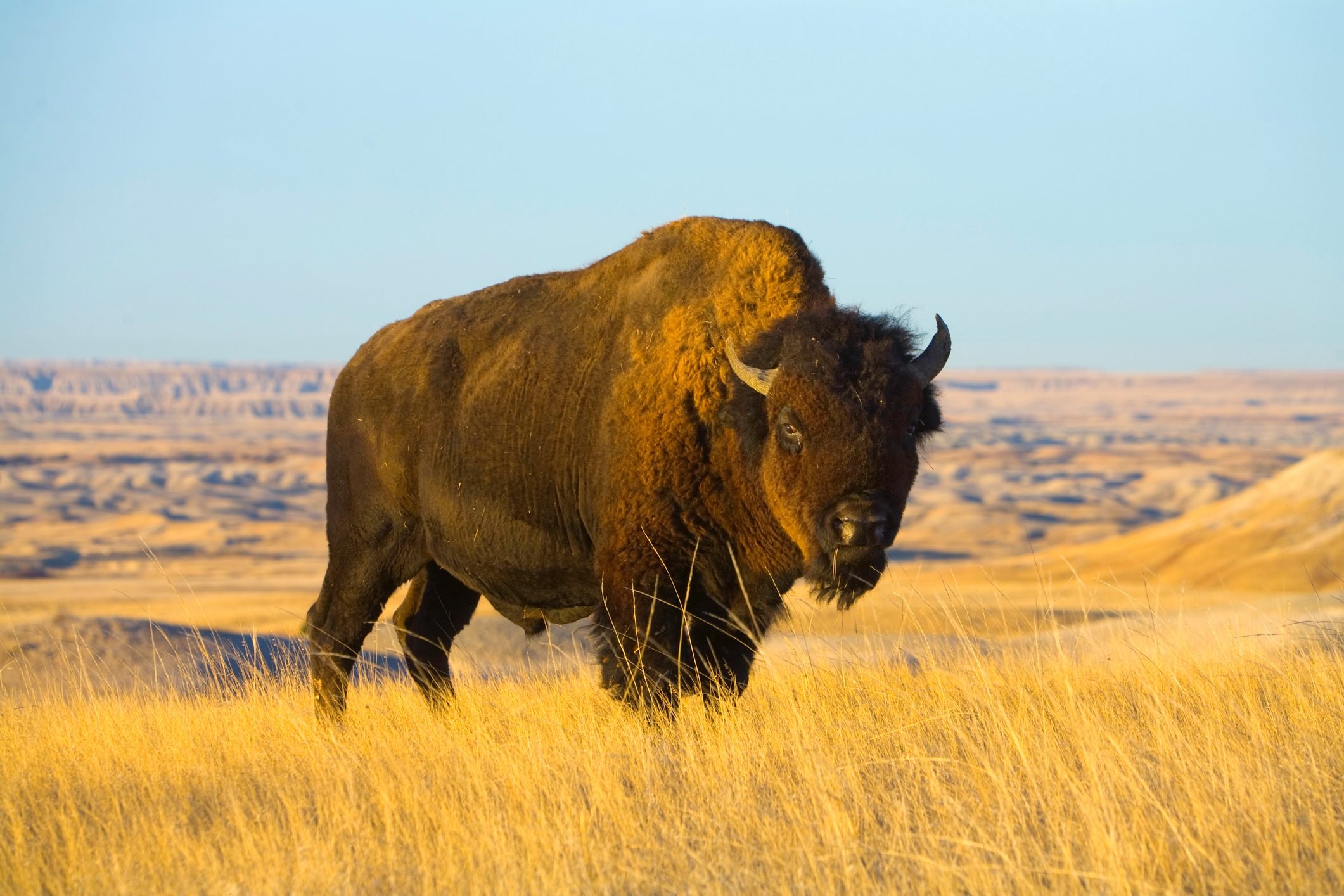 Many of South Dakota’s 14 million annual visitors come to the state to enjoy nature. Head to Badlands National Park (a 90-minute drive from Mount Rushmore) to see world-famous canyons and buttes, Wind Cave National Park (a 55-minute drive) to explore one of the largest and most complex cave systems in the world, and Custer State Park (a 45-minute drive), where you’re almost guaranteed to spot some of the park’s 1,300 bison along the Wildlife Loop Road. Pro tip: The Buffalo Jeep Safari Tour is the best way to get up close with the animals. Given the park’s abundance of wildlife, hiking trails, swimming, camping, and fishing, it’s no wonder why Custer State Park earned a spot on our list of the best state parks in every state and why it’s one of the things to do when visiting Mount Rushmore.

Most visitors spend a couple of hours at Mount Rushmore and then drive 40 minutes to the world’s largest mountain carving, Crazy Horse Memorial. The memorial, which occupies a 600-foot-tall mountain, doesn’t just commemorate the Lakota leader Crazy Horse; it’s also dedicated to preserving and sharing the living history and culture of all Native Americans. This incredible memorial, which is still under construction, is also home to the Indian Museum of North America and its huge collection of art and artifacts from more than 300 Native American tribes. Watch a movie about the origin of the memorial, then participate in a Native American music, dance, art, or cultural presentation.

During warm months (typically late May through late September), the memorial puts on a nightly multimedia laser-light show that features sound effects, colorful animations, and laser beams choreographed to music. Before leaving the memorial, visit Laughing Waters Restaurant, where you can try Native American tacos and Tatanka stew, made with bison meat from the Black Hills.

How to plan your Mount Rushmore road trip

With so many things to do in Mount Rushmore and the surrounding area, your road trip itinerary can be really flexible. To minimize packing and unpacking every night, hotels in the town of Custer or lodges and campsites within Custer State Park are the perfect central base from which to plan day trips. Three great day trips would be: 1) Mount Rushmore and Crazy Horse Memorial, 2) Wind Cave National Park, and 3) the Wild West town of Deadwood, where you can visit old-timey saloons and watch cowboy shoot-out reenactments. Deadwood is an hour north of Mount Rushmore and also makes for a family-friendly overnight stay.

Next, head east to Rapid City (30 minutes from Mount Rushmore or 40 minutes from Custer) to visit its museums and lively downtown area, where life-size bronze statues of all former U.S. presidents line the streets. You could tag Rapid City onto your day in Deadwood, then head back to your base in Custer, stay overnight in Rapid City, or head straight to the Badlands, depending on your time frame and your interest in city versus nature. FYI, Rapid City just may be South Dakota’s best-kept secret.

From Rapid City, it’s about an hour’s drive east to Badlands National Park. Spend the night in the town of Wall, where you’ll definitely want to visit Wall Drug, one of America’s most famous emporiums and one of the best free attractions in South Dakota. From Wall, you could either loop back to Rapid City or hop back on Highway 90 and head east. Stop at Dignity: Of Earth & Sky, a Native American statue overlooking the Missouri River, and the World’s Only Corn Palace on your way to Sioux Falls. In Sioux Falls, the largest city in the state, stroll along the downtown Sculpture Walk and visit the waterfalls in Falls Park.

Where to eat at and around Mount Rushmore

Right inside Mount Rushmore is the Memorial Team Ice Cream station, which creates the irresistible, creamy concoction with an original recipe used since 1780. Thomas Jefferson is credited with bringing this first ice cream recipe to what would later become the United States. The on-site restaurant, Carver’s Cafe, offers burgers, soups, and meat-and-potato meals. But if you’re looking for something a bit more upscale (which is hard to find in these parts), head to the Nordic-themed Skogen Kitchen in Custer. Another great choice would be the restaurant inside the State Game Lodge in Custer State Park, which served as the “Summer White House” for President Calvin Coolidge in 1927.

In Deadwood, head to Deadwood’s Saloon #10, where Wild Bill was famously shot during a poker game. In Rapid City, Firehouse Brewing Company is known for its fire-pit BBQ and live music (not to mention the Instagrammable mural that decorates the side of the building). In Sioux Falls, indulge in burgers and milkshakes inside an old Airstream trailer at the Phillips Avenue Diner.

Where to stay near Mount Rushmore

During your Mount Rushmore road trip, you’ll have a huge number of options for accommodations that fit any budget or travel style—from glamping and camping to adorable cabins and proper hotels. To be close to the action, you can stay at a lodge inside Custer State Park, one of the most popular parks and attractions near Mount Rushmore. The private lodges mostly resemble hotels, and some have expansive front porches and outdoor patios. You’ll likely want to work some of the attractions here into your Mount Rushmore road trip, so you can plan your accommodations near whatever sites you want to visit. 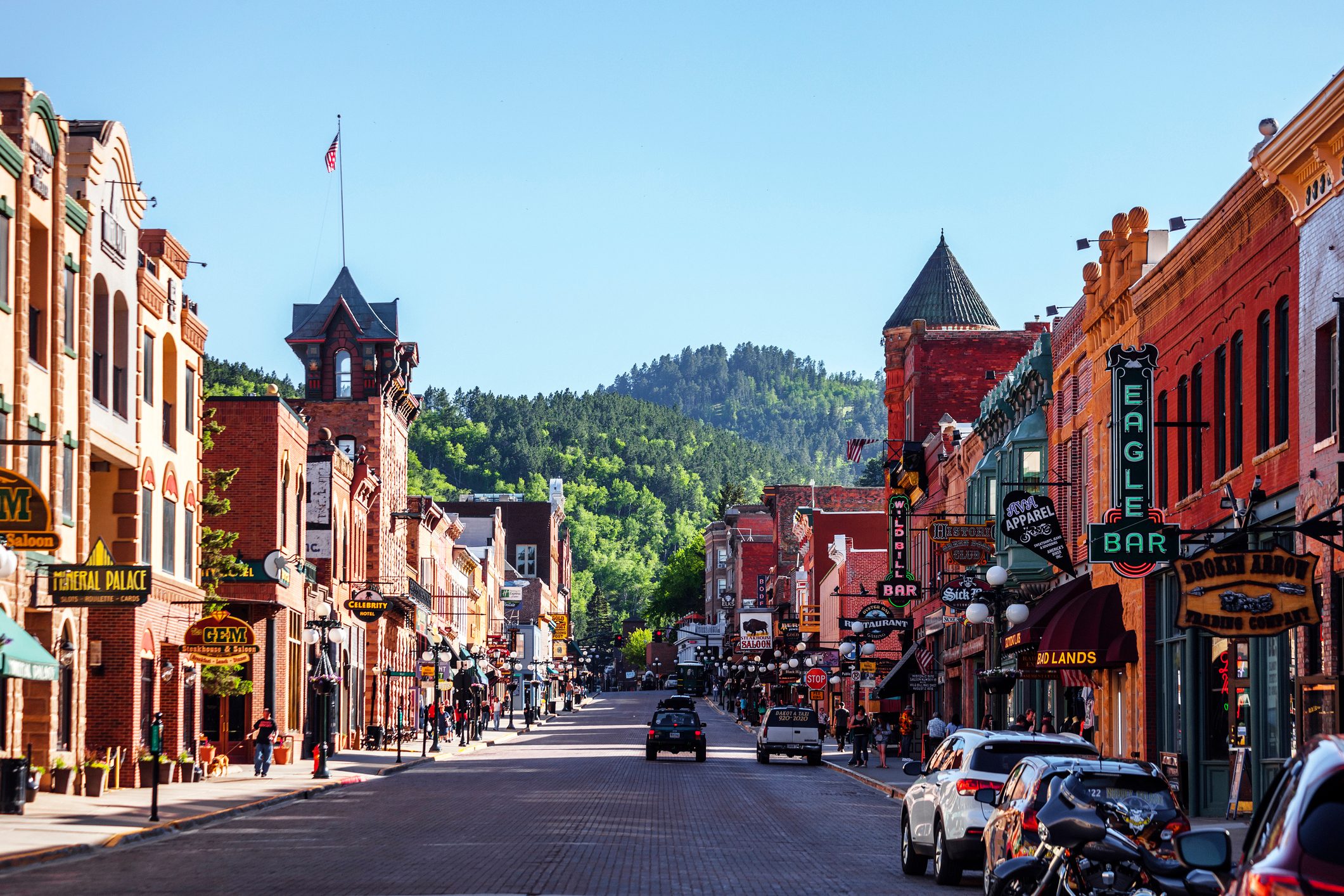 In Deadwood, just about every single hotel is located on the downtown strip, but if you want a hotel with a good restaurant (and the standard Deadwood casino), you’d do well at the Mineral Palace. In the Badlands, you can either stay right inside the park at the Cedar Pass Lodge (more expensive but worth the splurge), camp out under the stars, or opt for the family-friendly Frontier Cabins in Wall (for only $10 extra, you can overlook a wide, open prairie instead of a highway). In Sioux Falls, the Country Inn & Suites is an affordable, centrally located hotel that overlooks the Big Sioux River and Arc of Dreams statue downtown.

The memorial is open seven days a week, year-round, so you can plan a Mount Rushmore road trip any time of year. The only day the visitor center and buildings are closed is December 25, though the grounds themselves do remain open that day. The grounds, visitor center, parking lot, gift shop, and other buildings maintain different hours, so check here before your visit.

The memorial is beautiful any time of day, but to capture the best light in photographs, arriving in the early morning is best. If you want to catch Mount Rushmore’s evening light and music ceremonies that detail the history of the site, plan your visit between May and September. Also note that February and March are the snowiest months. Like anywhere else in the country, blizzards are unpredictable, and a heavy snowfall, or even a foggy day, could make viewing the memorial impossible, so check the forecast before your trip. Need wheels for your trip? Here’s what you need to know about renting a car for a road trip.

Some sites listed here may not be open or may have limited hours or other restrictions due to COVID-19. Please check with them before you go.

Cassandra Brooklyn
Cassandra Brooklyn is a writer, guidebook author, and international tour leader based in New York City. She writes regularly about travel, food, health, and tech and has been published in Reader’s Digest, The Daily Beast, Fodor’s, AAA, Lonely Planet, Matador Network, The Culture Trip, Travel + Leisure, Moon Travel Guides, Medium, and Far & Wide, among others. She earned her Master’s degree in Psychology from New York University and her BBA in Marketing from the University of Wisconsin. You can follow her on Facebook, Instagram, and Twitter.

The Real Reason Ice Cube Trays Have Flat Spots on Them