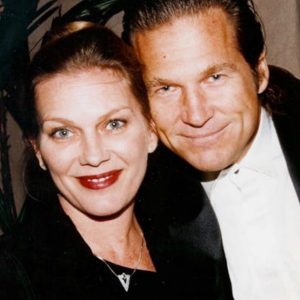 Jeff Bridges won best actor at the Golden Globe and Screen Actor’s Guild (SAG) awards in 2009 for his portrayal of a country singer in Crazy Heart. After accepting his SAG award, Bridges honored his wife, Susan. Married for more than 30 years, the couple has three daughters. In 2006, Bridges wrote about his happy marriage for Reader’s Digest. Read his piece below.

I don’t know how it is for women or for other guys, but when I was young and in my 20s, I had a fear of marriage. I thought it was a giant step toward death. So I did everything in my power to resist it — the idea was frightening to me, man. Then I met Susan Geston in 1974 while I was shooting the film Rancho Deluxe in Montana, up in Paradise Valley at Chico Hot Springs, and I thought, Now, this is interesting.

Susan, who was from Fargo, North Dakota, the daughter of a professional couple (an architect and a university professor), was waitressing at the time. She was doing whatever needed to be done at the ranch, and I noticed her right away. Not only was she beautiful, she had a broken nose and two black eyes. I had this fantasy that she’d been beaten up by a boyfriend and that I was going to save her. Actually she had been in a car accident a few days earlier. I did what lots of guys do when they see a girl but don’t want her to see them: I held up a magazine, looked over the edge, and then ducked back behind it when she walked by. It took me all day to finally get up the nerve to ask her out. And she said no.

Just then the makeup man on the film snapped a photo of the two of us. About 15 years ago the guy sent it to me, saying, “Here you are asking a local girl for a date.” He didn’t know that that “local girl” became my wife. I still carry that photo around today. It’s one of my most prized possessions.

After she turned me down, I ran into Sue again at the film’s wrap party, and I asked her to dance. We danced together, and then I asked her to go look at some property with me. We drove to Yellowstone Ranch, and as I was looking at the land and looking back at Sue, I started thinking that I was looking at my wife-to-be. She was so relaxed and easy to be with. She had a fun attitude, and I had a feeling of being at home — a soothing feeling of being where I belonged.

When I got back to Los Angeles, I realized I had fallen in love with her in that week. It was shocking.

I hatched a plan that involved renting a motor home and enlisting the help of my best friend, David Greenwalt, who became the producer of the TV series Buffy the Vampire Slayer. The two of us drove from Los Angeles to Montana so I could “kidnap” the girl I was in love with. Sue agreed to leave the ranch to be with me, and eventually she came to live with me in L.A.

After a few years, she was ready to get married. When I mentioned my “marital death” theory, she laughed at me at first. Then she realized I wasn’t kidding. Sue wanted to move along in her life, make a commitment, have children. I wasn’t ready. So we ended up living apart for six months, though we still saw each other.

Then, when Sue got a job offer in Montana, it struck me that she was really leaving.
She actually talked to my mother about what she should do; they’d become the best of friends. And my mom, Dorothy — my own, wonderful, loving mother — counseled Sue to leave, forcing me to make a decision. My mother said, “Don’t stay with him.”

The pressure was on! Finally I came to my senses. I thought, If I let this girl go, I will always know she was the one. So I got down on my knees and asked Sue to marry me. She said, “Yes. When do you want to do it?” And I said, “This week.” Five days after I proposed, we tied the knot, on June 5, 1977.

Sue’s always given me room to be myself. Still, the first few years of our marriage were a challenge for me. There were some bumps, which we got through together. Then we had our first beautiful surprise when our oldest daughter, Isabelle, was born in 1981. You always hear people say that having kids changes everything, but you can’t fully realize it until you have children yourself.

This is when Sue showed how truly incredible she is. Isabelle became sick with a swelling of her brain when she was four years old. I was off doing 8 Million Ways to Die at the time, while my family was in Montana. Sue handled everything herself up to this critical point. When Isabelle was diagnosed with encephalitis, a viral brain infection, we didn’t know whether she was going to live or die. By then we also had our two-year-old toddler, Jessie, and Sue was seven months pregnant with our third daughter, Haley.

Even when Haley was born and Sue had an infant to care for on top of everything else, she pulled us all through the crisis. She drove back and forth to the hospital, and then to rehab with Isabelle, to take care of everyone and everything. She had enormous strength and focus, and was such a natural caregiver. I just looked at her in awe.

It took Isabelle a year and a half to recover. She had to learn to sit up, crawl and walk all over again, and Sue helped her, without complaint, every day. When times are tough like this, that’s when you gain strength and wisdom for life.

In the 28 years we’ve been married, we’ve done 50 movies together. I say “we” because Sue deserves a credit too. I’m the guy who makes the buck, but she’s the one who takes care of everything else. I really am more in love with her than ever.