You don't have to be from the same species to be kindred spirits.

Stories of interspecies friendship are one of our favorite things here at Reader’s Digest. From the cat who helps his dog brother with his separation anxiety to the 9-year-old whose best friends are the six chickens her family adopted at the beginning of the pandemic, the bonds that form between members of the animal kingdom make our world a better place to be. But have you heard the one about the woman, her dog, and the baby hummingbird they rescued?

Alannah Zurovski takes care of everyone in her life: in her work as a caregiver for the elderly, at home with her rescue dog, Mowgli, and in her Oxnard, California neighborhood, where she has developed a reputation for rescuing baby hummingbirds. When Reader’s Digest spoke to Alannah, she had just returned from picking up the latest addition to her household, a newly rescued baby hummingbird she had named Spunky. But we were calling to talk to her about an earlier hummingbird rescue success story: a fledgling that she named Hummer.

In many ways, Alannah’s bird rescue story starts with her dad. A pilot based in Colorado, he shares a lifelong love of animals with his daughter, and as a frequent flier himself he has what Alannah describes as a “spiritual connection with birds.” When Alannah fostered her first hummingbird several years ago, she knew exactly who to call for help. “I was like, I have no idea! What’s the formula, what do I do? You call your mom when you have a baby.” But in this case, her father, who has rescued many birds himself, got the call. “He said, here’s what you feed him,” Alannah laughs. “Most of the ones I’ve gotten have been babies, and they need to be fed at least every 30 minutes,” she explains. “It’s like having a newborn!” With a little help from dad, Alannah’s hummingbird-rescuing career was underway. When a neighbor found Hummer on the ground in their yard, Alannah was ready to nurse him back to health. But how would her dog Mowgli take to a tiny hummingbird in the house?

A dog with no place to go

Alannah, who has a background in early childhood studies, describes herself as a natural caregiver for “anything in need.” In 2015, that instinct led her to adopt Mowgli from a local dog rescue. “I had just gone through a really hard time of losing my grandfather, and I was just needing something,” she shares. “Needing something to focus on, needing something to take care of.”

When she met Mowgli, the rescue center told her he had been left at the back door in a cardboard box. “They had no information on him. They didn’t know how old he was, they didn’t know any of his health conditions,” she says. Mowgli came home with her, and the two have been best friends ever since. Mowgli and Alannah recently celebrated his 13th birthday with homemade doggy-friendly ice cream. The sweet pooch has even become an important part of her hummingbird fostering.

Alannah had faith in his kind nature, and when she brought Hummer home, Mowgli reacted even better than she would have hoped. “He just kind of seemed to know that, you know, mom took me in when I didn’t have any place to go, and so if she’s bringing this little—I don’t even know what it is! But if she’s bringing his thing into the house it must need it,” Alannah shares. Truly a rescue match made in heaven, Mowgli’s gentle soul definitely mirrors his human mom’s innate kindness.  “It seems to be a thing where he’s a kindred spirit of mine,” she agrees.

Amazingly, instead of seeing him as a threat, Hummer took to Mowgli as well. In between feedings, the dog and the hummingbird liked to nap together on the heating pad, with Hummer sitting atop Mowgli’s shoulder, chirping away to his canine pal. Mowgli even helped with Hummer’s flying practice. “At the time I had close to 100 houseplants,” Alannah admits. “Hummer wasn’t really ready to fully fly yet, and so he’d usually end up hitting a wall, or hitting a plant, or hitting something! I’d try to keep my eye on him, but they’re so teeny and they go so fast. But Mo would get up and sniff him out and go right to where he was so I could find him.” 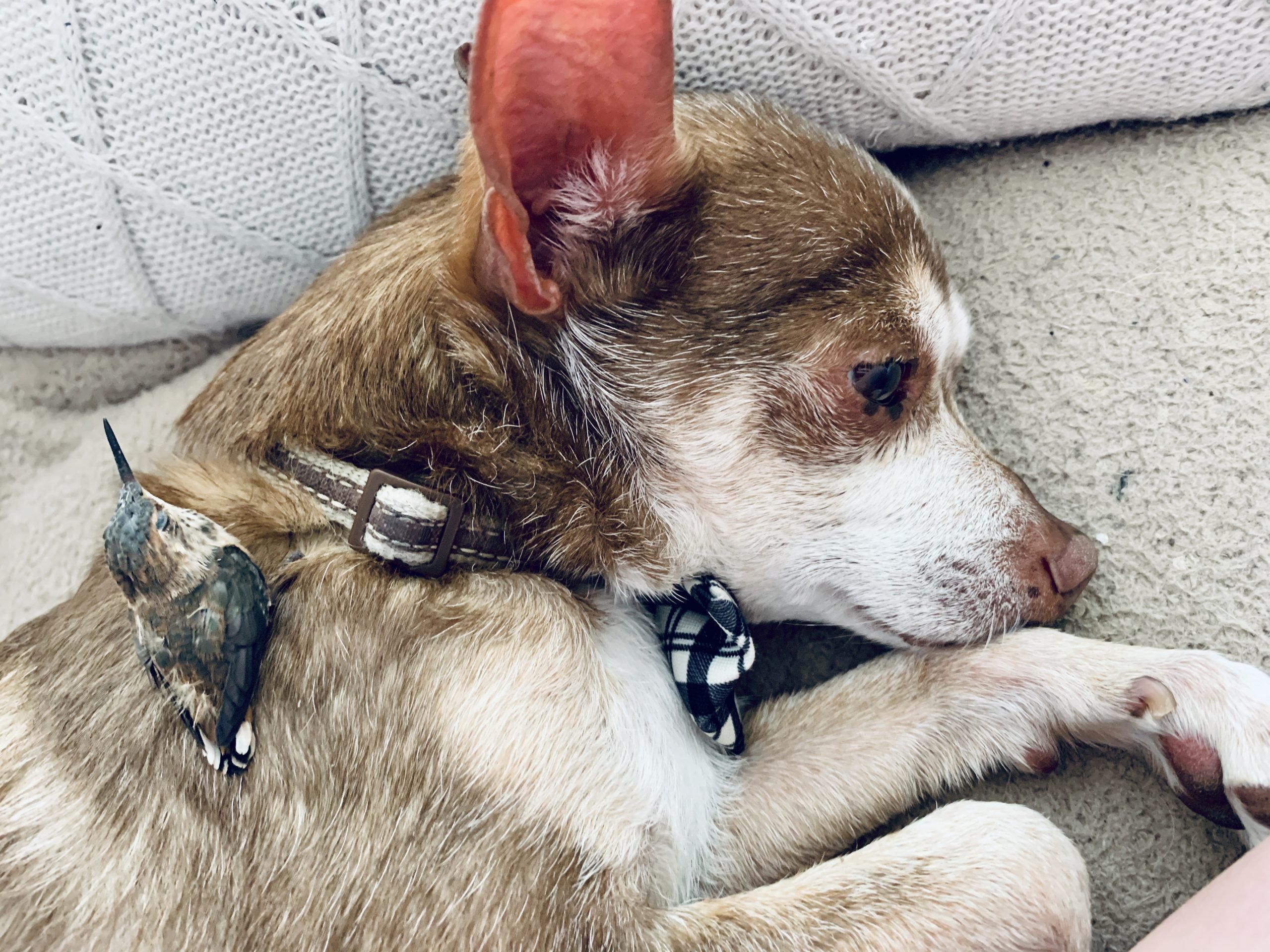 Hummer spent just 36 hours with Alannah and Mowgli (including one sleepless night of half-hourly dog-supervised feedings), but his impact on their lives is still being felt. When Hummer started to fly with confidence in the house, Alannah knew it was time to release him into the outside world again. She placed him in an outdoor hanging planter, knowing he would be safe there until he was ready to take off. Through the open front door, Alannah and Mowgli could hear him chirping loudly, as though saying goodbye and thank you. But Hummer’s story isn’t over yet.

As Alannah tells it, every morning she gets up and lets Mowgli out into her gated front yard to go to the bathroom, and nearly every morning a hummingbird appears and sits in the hanging planter nearby for a few minutes. “It has to be Hummer,” she says. Alannah thinks he might see Mowgli, or recognizes the sound of her voice; maybe he just knows their routine, but the hummingbird appears “probably five out of seven days a week,” as soon as she lets Mowgli out. It definitely seems like more than a coincidence! “I don’t know it for sure,” Alannah admits. “But I do know it never happened before I had Hummer.”

As Alannah and Mowgli care for Spunky, their new rescue, Alannah is again impressed with Mowgli’s gentle care for the tiny bird. With Hummer, Mowgli “seemed to fall right into place,” she says. “And he’s doing the same thing with this one right now.”

We have no doubt that soon, another hummingbird will join Hummer in visiting Mowgli every morning.

Share your own story of unlikely animal friendships in our hunt for the best Pet Pals for a chance to be published by Reader’s Digest.

If You See a Dryer Sheet in Your Mailbox, This Is What It Means
How the Dog Nobody Wanted for 17 Months Became a School’s Unofficial Mascot
Meet the Pitbull Who Became Her Family’s Caretaker