Why You Should Never Make Your Thanksgiving Turkey in a Bag

When cooking turkey in a bag, think plastic. Paper grocery bags can be toxic. Here's why.

In the endless quest for the life-changing bird that will make any chef a legend at future holiday dinners, many different cooking methods have been born, from grilling in the backyard to prepping it in the dishwasher.

According to experts, the brown-bag method ranks right up (or should we say, down?) there with the dishwasher method. Both the University of Illinois and the United States Department of Agriculture (USDA) agree: Using a grocery bag is dangerous

Still, believers say cooking turkey in a bag guarantees a heavenly bird—juicy on the inside, crispy on the outside, with crispy golden skin. Plus, clean up woes get tossed with the bag. For more turkey-making stories, check out these 27 hilarious real Thanksgiving calls to the Butterball hotline.

Is cooking a turkey in a bag always bad?

The reality, according to the USDA, is that toxic fumes could be released from the ink, glue, and recycled materials in the bag. Plus, you can start a fire in your oven. Bad for the oven and bad for the turkey.

One “compromise”—and our friends at the University of Illinois will back us up here—is to toss the paper and try a turkey-size oven cooking bag, instead. While popping plastic in the oven may seem like an even worse idea than paper, oven bags are made of materials that are heatproof past the average temperatures used in ovens. Most oven bags you’ll find in the store are FDA approved (but always check) and they don’t contain BPA or other dangerous chemicals. Make sure you know these 7 other turkey myths that could ruin your Thanksgiving. 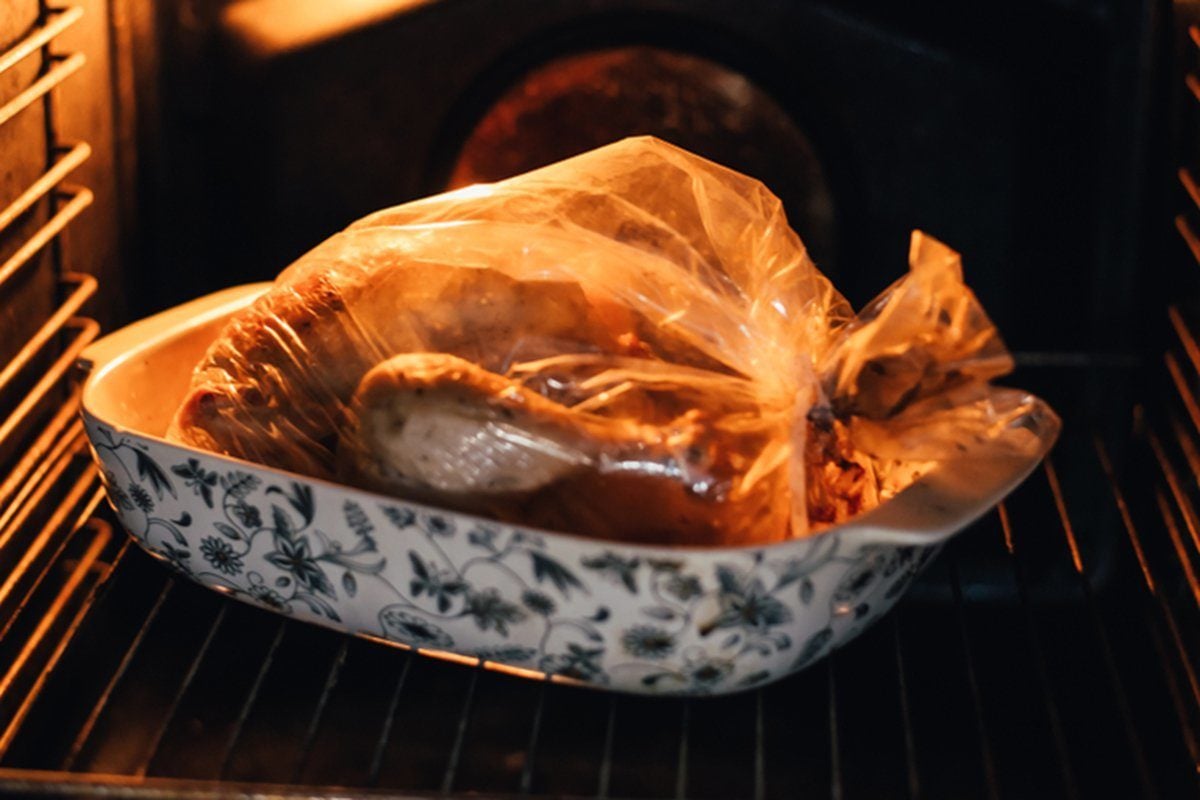 Brined birds—such as a fresh herb brined turkey or a marinated Thanksgiving turkey—are often double bagged to contain the tasty liquid. The equally delicious lemon herb roasted turkey cooks up the magic in a single oven bag, however. Paper is not recommended for any of these recipes. An easy alternative is cooking turkey breast in a slow cooker.

Not just for the birds

The idea of cooking a turkey in a bag made of paper still has merit, though—as long as it’s the right kind. Orange tilapia retains its moisture because it is cooked in a parchment paper pouch. And simple but elegant citrus salmon en papillote gets its flavor (and its fancy name) from the parchment paper cooking method. But when it comes to your Thanksgiving bird, if you have any doubts about preparing it in a bag, opt for a paperless cooking method. For more turkey dos and don’ts, don’t miss the 20 most-asked questions (and answers) on making Thanksgiving dinner.

Originally Published on Taste of Home
Now Trending
What’s Ahead for Bridgerton in Season 2?
11 Thanksgiving Blessings to Read at the Table This Year
22 Stores Open on Thanksgiving 2022