If you’re anything like me, your mind was thoroughly blown this weekend when Felix Baumgartner broke the sound barrier during 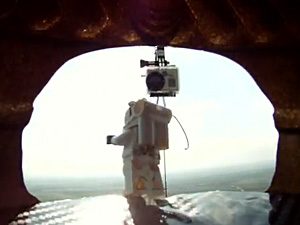 If you’re anything like me, your mind was thoroughly blown this weekend when Felix Baumgartner broke the sound barrier during his Red Bull-sponsored leap from 128,000 feet above ground. I get the jitters from watching his slow ride up—not to mention his death defying launch into the wild blue yonder.

But as impressive as Baumgartner’s feat is, I’m also floored by the so-called Stratos Jump on a 1:350 scale, as accomplished with a small army of LEGO people and some very crafty camera work. The video is an advertisement for Vienna’s Model Maker Fair, and it’s an entertaining watch—especially if the all-too-real footage linked above gives you the spins.

Check it out below: