Here’s Why Osteoporosis Is a Bigger Problem Than People Realize

It is easier than ever to prevent and treat osteoporosis, but the number of cases is on the rise. How can you avoid becoming a victim? 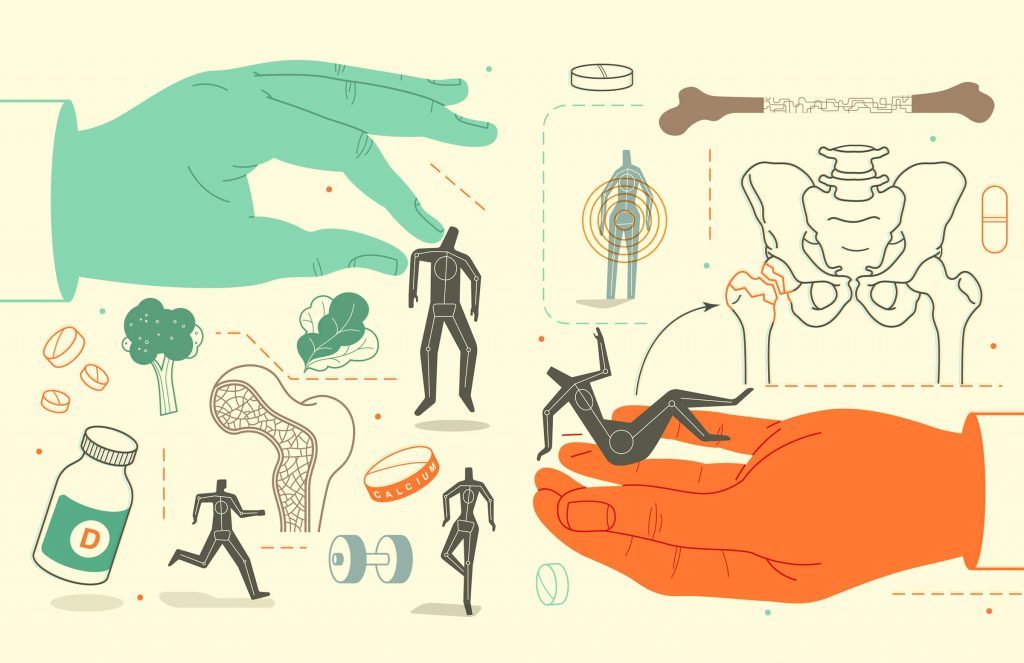 At age 53, Lisa Rustin slipped on a Del Mar, California, sidewalk and fractured her arm. A bone-density scan, recommended by her gynecologist because of her family history of thinning bones, revealed osteoporosis. She threw away her high heels, quit downhill skiing, overhauled her diet to include more calcium-rich foods, and started walking with a backpack filled with books—weight-bearing exercise is an important way to strengthen your bones. Rustin also began taking calcium and vitamin D supplements and a bisphosphonate drug, the most commonly prescribed osteoporosis treatment. Of course, wearing high heels and low vitamin D aren’t the only surprising osteoporosis causes.

She considers her fracture to be—well, something of a lucky break. “My mother had broken her hip in the past, when there was no treatment for her osteoporosis,” says Rustin, who is now 58. “After I broke my arm, she fractured her shoulder. By the time I got the news about my bone-density test, my mom had passed away due to complications from her shoulder fracture. That was my wake-up call.”

Osteoporosis—the term literally means “porous bone”—arises when bone cells that break down are not replenished by new ones. That causes bones to break more easily and take longer to heal when they do.

Over a lifetime, 50 percent of all women will have an osteoporosis-related fracture—a risk greater than the odds for heart attack, stroke, and breast cancer combined. For men, the odds are up to one in four; in fact, a man over 50 is more likely to have such a break than he is prostate cancer.

All told, of the two million Americans who have an osteoporosis-related fracture each year, 300,000 will break a hip. Among them, half will never walk again without assistance. One in four will die within a year. Osteoporosis doesn’t just break bones. It smashes lives.

What makes osteoporosis even more tragic is that in the past 25 years it has become highly treatable and even preventable. Dual-energy X-ray absorptiometry (DXA) scans, which measure the amount of calcium and other minerals in your bones, are accurate enough for the World Health Organization to use them as the criteria for diagnosing osteoporosis and its precursor, osteopenia. DXA scans are also effective in predicting fracture risk. They are covered by Medicare and most private health insurance.

Bisphosphonates and other drugs that treat low bone density can reduce the risk of fractures by 40 percent in women and up to 67 percent in men.

But despite these advances, fractures are becoming more common, not less. According to a 2018 study, after a decade of declines, the number of broken hips rose 2.5 percent in women ages 65 to 69 and 3.8 percent in women ages 70 to 74 between 2013 and 2015. E. Michael Lewiecki, MD, the lead researcher and a director at the New Mexico Clinical Research & Osteoporosis Center, estimates that 11,000 hip fractures and 2,000 deaths could have been prevented over those three years.

How is this increase in fractures possible? Deep misunderstandings about what really affects our bones, overblown fears about bone-building drugs, changes in health insurance coverage for bone scans, and the “I feel healthy, so I must be fine” hubris of aging baby boomers have all combined to put our bones at risk. If you have any of these 6 silent symptoms, you might have osteoporosis. “We have our blood pressure checked regularly and our cholesterol levels measured, but too many of us ignore screening for bone health,” Dr. Lewiecki told newsmax.com. If you want to avoid becoming a victim, keep in mind these important medical findings.

The only way to tell whether you have osteoporosis or osteopenia is with a bone-density test. DXA scans, the gold standard, are recommended by the National Osteoporosis Foundation (NOF) for women age 65 and older; men age 70 and older; and as early as age 50 for those with at-risk bones, such as postmenopausal women, smokers, and anyone who is underweight, drinks more than two alcoholic drinks a day, has a family history of osteoporosis, or has previously broken a bone. But don’t wait for your doctor to order a scan. If you’ve had one broken bone, research shows that your odds for another increase as much as ninefold. Yet in a 2017 NOF survey, 96 percent of women who’d had a fracture said their doctors still didn’t recommend getting a bone-­density test.

“After a heart attack, people are evaluated and put on a plan with medication and lifestyle changes to prevent another one. The same thing should happen after a fracture,” says Bart Clarke, MD, the president of the American Society for Bone and Mineral Research and a researcher at the Mayo Clinic College of Medicine and Science.

A big part of the problem is that the number of private physicians with DXA scanners has dropped 26 percent since 2007, when Medicare reduced the amount of money it pays doctors per scan. Most hospitals still offer scans, but in rural areas, this can mean that patients have to drive hours to get one. As a result, since 2008, nearly 3.7 million fewer women on Medicare have had bone-­density tests than had been projected.

On the plus side, in 2018, a coalition of bone-health groups recommended that after a hip or spine fracture, all health-care practitioners involved in a person’s care—from ER doctors and primary care physicians to gynecologists, orthopedic surgeons, physical therapists, and registered dietitians—make sure there’s a bone check and, if needed, treatment.

If you’re younger than 40 and have risk factors for osteoporosis, it’s not too early to talk with your doctor about getting tested. Anyone 40 or older, meanwhile, can estimate his or her fracture risk with the online Fracture Risk Assessment Tool (FRAX). FRAX doesn’t replace a bone scan, but it is a good way to help you decide whether you need one or are at risk for a fracture in the next ten years.

Men Also Need to Get Tested (Some Younger People Do Too)

Osteoporosis isn’t just a woman’s disease. Don, now 74, a retiree in the Clearwater, Florida, area (he asked us not to use his last name), was diagnosed with osteoporosis at age 44 despite an active lifestyle that included daily walks and 40 miles of weekly bicycling. “I had strained my back, and X-rays of my spine showed that it was deteriorating,” he says. “It runs in my family, though I think I’m the only man who inherited osteoporosis.”

Scientists don’t know why, but men have a higher risk for death after a hip fracture caused by osteoporosis than women do. So it’s especially important for men to get scanned and treated if necessary. Don’s DXA scan results improved after a year of bisphosphonate treatment. “I had stomach problems with daily pills, but a weekly pill was OK,” he says. “Now I focus on healthy eating, take vitamins D and K and calcium, and walk every day. My bone density is staying stable.”

Don’s story also demonstrates that younger people are at increasing risk. While osteoporosis is most common in women over 60 and men over 70, a 2018 University of Nevada study found that the average density of the thighbones of Americans as young as 30 was significantly lower in 2014 than in 2005.

Too much sitting and too little activity are likely the top reasons for the decline, the researchers concluded. But there are other surprising risk factors: weight-loss surgery, diabetes, breast cancer, and air pollution are all associated with bone problems, as are androgen-­deprivation therapy (used to treat prostate cancer) and corticosteroids (used to treat rheumatoid arthritis).

A study found that about three in ten postmenopausal women believe that simply drinking milk or taking calcium supplements is all you need to prevent broken bones. In fact, the research on calcium and its frequent sidekick, vitamin D, is mixed. Two recent large reviews of well-designed studies suggest calcium and vitamin D don’t reduce fracture risk. But a 2018 study did show that a higher intake of dairy foods is associated with higher bone-mineral density and vertebral strength in men.

For now, most experts suggest getting 1,000 to 1,200 mg of calcium and 400 to 4,000 IU of vitamin D a day from food and drinks. (A glass of milk has 30 percent of the recommended calcium and 25 percent of the vitamin D.) Besides dairy, you’ll find calcium in kale, broccoli, canned sardines with bones, and fortified breakfast cereals; salmon, tuna, and egg yolks provide vitamin D as well as calcium.

If you can’t get enough through food, Dr. Clarke recommends a supplement of 500 mg of calcium, plus 600 IU of vitamin D for people younger than 70, and 800 IU after age 70. “It’s also important to have an overall healthy diet with enough protein and not to overdo alcohol, caffeine, sodas, or refined carbohydrates,” he adds.

Note that no supplement has been proved to prevent fractures in people with osteoporosis, Dr. Clarke says. Some could even be harmful, such as strontium, a mineral touted for stronger bones that’s now off the shelves in Europe after the European Medicines Agency warned consumers to stop using it because of increases in heart attacks and blood clots.

Take Bone-Protecting Drugs If Your Doctor Recommends Them

Bisphosphonates, including alendronate (Fosamax) and ibandronate (Boniva), reduce the risk of a fracture by slowing the breakdown of bone cells. They are the most commonly prescribed drugs for osteoporosis because they work. Yet these drugs are often a hot topic for the wrong reasons when newcomers join osteoporosis support groups such as Bone Boosters of New Mexico. “People are terrified,” says Marge Peterson, 77, a retired teacher from Las Cruces who started the group. “They’ve seen so much negative publicity and mis­information online or have been scared by other people about side effects.” In fact, the number of Americans using bisphosphonates dropped more than 50 percent between 2008 and 2012, a National Institutes of Health study reported.

There are certainly side effects: bone, joint, and muscle pain; nausea; heartburn; and gastric ulcers. More rarely, the drugs can lead to an erosion of the jawbone; one in 10,000 patients may experience a thighbone fracture too. But the risks, says Andrea Singer, MD, chief medical officer of the NOF, “are very low, far lower than the risk for a fracture in untreated osteoporosis.” Your doctor might recommend periodic drug holidays or trying alternative medications.

Some of the newer treatments show great promise. A game-changing 2018 study of 2,000 women with osteopenia found that the bisphosphonate zoledronate (Reclast) reduced the risk of a fracture by about one third. Raloxifene (Evista) and denosumab (Prolia) are alternatives to bisphosphonates that also help slow the breakdown of bone. Teriparatide (Forteo) and abaloparatide (Tymlos), the latest osteoporosis medications to be approved by the FDA, work differently; they actually help build new bone.

Even a Little Exercise Helps

High-impact exercises such as dancing, jogging, and jumping rope help keep bones strong, but so does walking or using an elliptical machine or stair-stepper. Muscle-strengthening moves work, too, as can yoga.

People with osteoporosis used to be warned against high-impact exercise because of the risk of falls and fractures. But a 2017 study found that only 30 minutes twice a week of high-intensity exercise improved bone density, structure, and strength in postmenopausal women with low bone mass, without adverse effects. And a recent review found that combining exercise with bone-building drugs works better than either strategy alone to boost bone density in people with osteoporosis. Want to avoid breaking a bone? A good place to start would be to avoid these 7 everyday habits that can lead to osteoporosis, but one of the best things you can do is to go break a sweat.