When to go: Year-round.

Words to the wise: The official hurricane season lasts from June through November, with the most tropical storms occurring in September.

Lodging: Reservations required during peak season, Christmas until the end of April.

Completed in 1938 along the course of an ill-fated railroad that had been destroyed by a hurricane, the Overseas Highway (Rte. 1) leaps from island to island across 42 bridges as it arcs southwestward through the Florida Keys. The islands were first seen by Europeans in the 16th century, when Spanish flotillas were carting off the riches of the New World. Today visitors come for different kinds of treasure — sunshine, escape, and clear, warm waters that teem with life.

1. North Key Largo
Instead of heading south from Florida City on the first leg of Rte. 1, take Card Sound Road to the northern end of Key Largo for a glimpse of what the islands looked like before this area’s commercial boom. Beyond the toll bridge, this sparsely populated sector boasts a stand of virgin forest in which exposed coral formations dot the landscape, along with palms, marshes, mangrove swamps, and the occasional wild orchid. Among the rare animals found in this wilderness are saltwater crocodiles, scarlet ibis, pelicans, and roseate spoonbills; even the endangered Florida panther has been spotted here.

2. Key Largo
Some 30 miles long but averaging only about 2 miles in width, Key Largo is the largest of the Florida Keys. For a revealing look at its geologic underpinnings, slow down near mile marker 103 on Rte. 1, where an exceptionally fine expanse of coral has been exposed on the bank of a man-made channel.

Though tourist facilities and commercial development are much in evidence along the highway, here as elsewhere in the keys the sea is never very far away. At Key Largo the most notable marine attraction is John Pennekamp Coral Reef State Park, an undersea wildlife preserve. In addition to hordes of brightly colored fish, the reef is home to throngs of sea stars, sand dollars, sea anemones, crabs, and sponges. Tours by glass-bottom boat are available, and the more adventurous can snorkel and scuba dive in the seas of this underwater wonderland.

3. Islamorada
Stretching from Windley Key to Long Key, the Islamorada area is renowned as a center for sportfishing. Among its other attractions is the Theater of the Sea, a marine park at mile 84.5 that features performing dolphins and seals.

From the docks near mile 78.5, boats depart for excursions to the wilds of nearby Lignumvitae Key State Botanical Site, where the virgin forest includes such exotic species as strangler figs, pigeon plums, and gumbo-limbo trees. Boat tours also are available for visits to Indian Key State Historic Site, a lonely 10-acre islet that served as a bustling county seat until it was devastated during an Indian rebellion in 1840. Self-guiding walks lead through the ruins of the town, where tropical plants now flourish. To the south of Indian Key, visitors can explore San Pedro Underwater Archaeological Preserve. The site of a 1733 Spanish shipwreck, it is now a mecca for skin divers and snorkelers.

4. Long Key State Park
Wending among the tropical hammocks and mangrove-fringed lagoons in this 1,100-acre park are a variety of self-guiding nature trails, including one that was designed for exploration by canoe. The staff offers interpretive programs, with an emphasis on birds, sea turtles, and the fragile environments in which they live. The area’s seaside campsites offer clear views of the ocean, making this a popular spot for swimming.

5. Marathon
For a tranquil contrast to the hustle and bustle you’ll find in touristy Marathon, seek out the solitude of Crane Point Hammock. In addition to its wetlands and exotic hardwoods, the 64-acre preserve contains a few remnants from pre-Columbian times. The Museum of Natural History of the Florida Keys, situated at the hammock’s entrance by mile marker 50, has a wide range of exhibits, from ancient artifacts to pictures taken from outer space. There’s even a re-created coral reef — an excellent place to explore undersea life and still stay dry.

As you leave Marathon to visit points south, you’ll come to the famed Seven-Mile Bridge. Traversing the blue waters of Moser Channel — where only the merest specks of land intrude upon far-off horizons — the bridge is perhaps the most astonishing stretch on the entire Overseas Highway.

6. Bahia Honda State Park
Although the Keys are not noted for large sandy beaches, the ones bordering the Atlantic Ocean at Bahia Honda are some of the island chain’s finest. Charter boats ply offshore waters in search of game fish — including the spunky tarpon, a favorite among sportsmen. Hikers along the area’s nature trail should be on the lookout for the endangered small-flowered lily thorn and one of America’s largest remaining stands of silver palms. Many wild animals — tree frogs, falcons, pelicans, loggerheads, and geckos, for example — also live within or just outside the park’s borders.

7. National Key Deer Refuge
The key deer, found in the Florida Keys and nowhere else, is a subspecies of the larger, more common white-tailed deer. The main difference between the two is their size; an adult key buck stands only about 2 1/2 feet tall at the shoulder. After near extinction the animals are slowly repopulating their 7,900-acre refuge.

8. Key West
Once a hideaway for pirates, Key West today is a colorful patchwork of gardens, alleyways, historic buildings, shops, museums, and lively marinas. The southernmost city in the continental United States, it attracts a heady mix of fishermen, shopkeepers, navy personnel, Cuban refugees, artists, and assorted eccentrics with alternative lifestyles. Two greats, Ernest Hemingway and John James Audubon, are among those who once chose to live and work here.

But what really separates Key West from most other cities is its island charm. Perhaps the best way to experience its unique flavor is to visit Mallory Square, where locals and sightseers congregate each evening, amid a carnival-like atmosphere complete with street performers, to celebrate and toast the glowing sun as it sets beneath the sea. 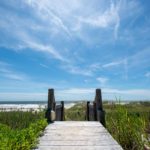 50 of the Best Beach House Rentals