Tom MichellUpdated: Apr. 15, 2016
From the book The Penguin Lessons

Watching my penguin swim was magical--and so was his effect on one lonely boy.

In 1975, Englishman Tom Michell was living in South America, where he taught at an English-language boarding school in Argentina. On winter break, he went to Uruguay and on the beach came across an oil-soaked penguin, the lone survivor of a spill. Moved by the bird’s distress, Michell brought him back to the apartment where he was staying, cleaned him, and fed him. The penguin quickly became attached to the young teacher, so he brought the bird—whom he’d named Juan Salvado—back with him to school. He installed him on a terrace adjoining his rooms in one of the dormitories; there the gregarious penguin enjoyed abundant sun and shade and entertained his many visitors. In Michell’s new memoir, The Penguin Lessons, he writes about the joy that Juan Salvado brought to everyone he met.

From the very first day that I brought a penguin to live at St. George’s, one student in particular wanted to help with his care, and that boy’s name was Diego Gonzales. Diego arrived at school a shy 13-year-old lad who gave the impression of being frightened by his own shadow. He was not an academically gifted student and struggled with his work.

None of St. George’s extracurricular activities seemed to suit him either; he was a slightly built boy who couldn’t catch a ball to save his life.

In addition, Diego’s knowledge of English was limited, and even his Spanish was heavily laced with the patois of his native Bolivia, so he tended to avoid conversation. But the saddest part of all was the homesickness he suffered. He hadn’t been ready to leave his family, and he missed them dreadfully. It came as no surprise that the boy spent as much time with Juan Salvado as he could. Diego was not entirely without friends, but they were students like him who had similar problems fitting in.

The possibility of letting Juan Salvado swim free in the school’s outdoor pool had occurred to me—our pool was unusual because it was completely devoid of any filtration or chlorination system—but when he first came to live at St. George’s in the winter months, the water was foul. The pool sat stagnant during the chilly winter, but once the temperature rose, it was drained, scrubbed, and filled. Following the pool’s commissioning, this cycle continued every two weeks throughout the season.

By the end of the pool’s first fortnight in use, the weather was still cool, and only a few students wanted to swim. I had waited for this particular evening when the pool was scheduled for its routine cleaning—no one would object if Juan Salvado fouled the water before it was drained. As soon as the swimmers departed, I signaled Diego and two of his friends who were exercising Juan Salvado on the fields nearby to bring him. Diego placed the bird next to me, and as I walked to the pool, Juan Salvado followed. He surveyed the water without apparently comprehending its nature.

“Go on!” I said, miming a dive and gesticulating with a paddling action. He looked at me, then at the pool. “It’s all right. You can swim!” I said, splashing water on him. Juan Salvado looked me in the eyes as if to ask, “Ah! Is this where the fish come from?” Without further encouragement, he plunged in.

With a single flip of his wings, he flew like an arrow across the water and collided with the wall on the opposite side, face-first, at considerable speed. The impact was palpable. There was a groan and a sharp intake of breath from Diego and his friends. Juan Salvado rose to the surface spluttering and dazed. He paddled about, giving little jerks of his head, but after a moment, he gave a vigorous shake and ducked below the surface again.

I was thoroughly familiar with Juan Salvado’s clumsy and amusing progress on land, but now I watched in awe. I had never had the chance to study a penguin in the water at such close range. Using only a stroke or two, he flew from one end of the pool to the other, executing dramatic turns and passing within a hair’s breadth of the sides without brushing against them.

Using the full volume of the 25-meter swimming pool, he looped the loop and leaped out of the water. Falling in again, he dived to the bottom and raced from one end to the other before corkscrewing back. He flew through the water many times faster than the swiftest human—a length took him a couple of seconds—and he alternated his subsurface demonstrations with intervals of paddling on the surface and splashing about.

The only comparison that could be drawn with this exhibition would be a bird in flight or an expert ice-skater on a rink. It was clear to me now how badly he needed to use his wing muscles that had been idle too long. Juan Salvado had finally found the freedom to express his true nature, savor his independence, and show us all just what it meant to be a penguin.

“Look at him go!” Diego and the boys shouted. “Ooooh!” and “Ahhh!” they cooed, as though they were watching a fireworks display.

After a while, Diego asked me quietly, “Can I swim with him too?”

I was astonished. I had never known Diego to want to do anything, apart from seek out Juan Salvado and avoid the rest of the school. He was showing an interest in something at long last.

“But the water is cold, and it’s getting late now! Are you sure you want to go in?” I asked.

Diego’s eyes were sparkling, and he seemed truly alive for the first time since I had known him. He ran to the dorm to get changed and reappeared in no time. Without hesitating, he dived into the water. Part of me suspected he’d sink like a stone, and I was prepared to jump in and rescue him.

But for the second time that evening, I was astonished. Not only could Diego swim, but he swam magnificently! He chased after Juan Salvado, and though with anyone else it would have looked absurd, he swam so elegantly that their pairing wasn’t ridiculous at all. As Diego swam, the penguin spiraled around the boy. I had never before seen such interaction between two species, and it gave all the appearance of having been choreographed to highlight each of their skills. Sometimes Juan Salvado took the lead and Diego swam as though chasing him; Juan Salvado allowed Diego to get close behind him, and then off he would fly. At other times, Diego led and the penguin swam around the boy, making figure eights as though spinning a cocoon. Occasionally, they swam so close that they almost touched. I was entranced.

After five minutes as promised, Diego swam to the edge. In one graceful movement, he sprang out of the pool and stood with water streaming from his hair, over his shoulders, and onto the floor. Next, skimming through the water, came Juan Salvado, like a homing torpedo. With a flick of his wings at the critical moment, he rocketed out of the water and came to a gliding halt on his tummy by my feet. We laughed out loud.

[pullquote] Diego wasn’t the sad chap we had become used to but a very normal boy with a very special talent, and nobody had realized it until then.[/pullquote]

I was almost speechless. I had witnessed an acrobatic (or aquabatic?) display the likes of which I had never seen before. But that was not all. Standing quietly by the pool and chewing the corner of his towel was a lithe youth who, I was confident, could outswim almost anyone in the school. It was a revelation. Diego wasn’t the sad chap we had become used to but a very normal boy with a very special talent, and nobody had realized it until then.

“No, I mean you are able to swim really well. Brilliantly, in fact!”

“You think?” he asked without looking directly at me, but I saw just the flicker of a smile on his face—the first, I believe, that had touched his lips since he’d arrived at school.

As we returned to the dorm, Diego told me that his father had taught him to swim in Bolivia. He also spoke freely about other things he enjoyed at home. I listened in silence, without correcting his English, as he talked nonstop back to the house. It was as though I were with a different boy. Shortly afterward, I called in on the housemaster and said Diego might be “rounding the corner.” I didn’t explain. That could wait.

I went back to my rooms, picked up a glass and a bottle of wine, and went out to sit on the terrace with Juan Salvado. Darkness was falling quickly, as it does in those latitudes, and the stars were coming out. I always kept some fish in reserve, and I gave them, one at a time, to the penguin, who ate them greedily and then settled to sleep by my feet. The cicadas were chirruping in the eucalyptus trees, masking all other sounds. I poured some wine into the glass. It was as though I were pouring a libation in thanks to the gods, and I drank to their health. 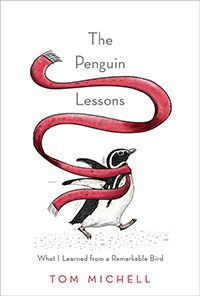