If You Live in These Cities, Pest Populations Are About to Spike

April showers bring May flowers, but abnormal fall and winter weather can bring cockroaches, rats, and mosquitoes. Yikes! If you live in any of these ten cities, you're at greatest risk.

During the winter, it can be all too easy to completely stop worrying about pests. It’s too cold for bugs and other critters, right? But in fact, many pest populations can still thrive during the winter, especially towards the end. And, in many regions of the United States, unusual winter conditions have provided the right opportunity for pests such as cockroaches and rats to thrive.

According to the National Pest Management Association (NPMA), who just released its bi-annual Vector Sectors list, there are ten cities that are most at risk for abnormally large pest populations as this winter comes to an end. In alphabetical order, the cities are: Atlanta, Georgia; Charlotte, North Carolina; Detroit, Michigan; Hartford, Connecticut; Los Angeles, California; Miami, Florida; New York, New York; Salt Lake City, Utah; San Antonio, Texas; and Washington, D.C. This data doesn’t take into account bed bugs, but one of those cities is also the city with the worst bed bug infestation in America. 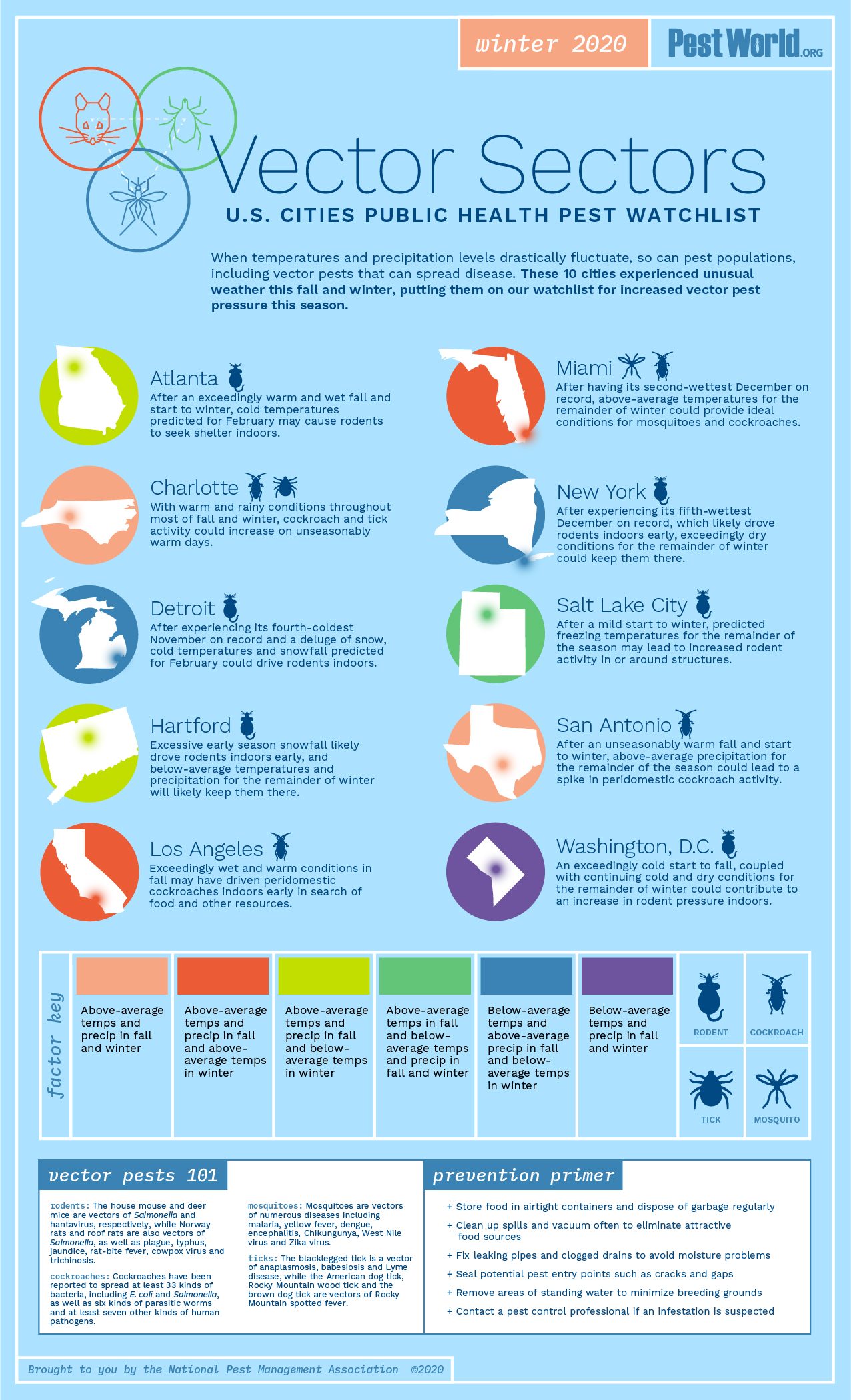 As you can see from the color-coded graphic, different factors contribute to different pest surges. For instance, Hartford experienced lots of snow in late fall and early winter, which likely caused rats to retreat indoors earlier than they normally would, followed by chilly temperatures that kept them indoors. Meanwhile, Charlotte and San Antonio experienced above-average rainfall and high early winter temperatures, making them more likely to experience a spike in cockroach populations in these cities. You’ll also want to be on the lookout for ticks if you live in Charlotte.

What’s so unusual about this season in particular? Well, warm weather has started unusually early in the winter and continued throughout. “Record-high temperatures nationwide in December through January allowed pest populations to sustain activity well past their normal seasonal decline,” explains the NPMA’s chief entomologist, Jim Fredericks, Ph.D. “This extended period of warm, wet weather allowed more pests to survive the winter, setting the stage for increased vector pest pressure going into spring.”

And these critters are more than just unwelcome visitors in your home—they can also be dangerous. “From food contamination and respiratory issues caused by rodents and cockroaches to…Lyme disease spread by ticks, diseases transmitted by pests pose a significant threat to public health and require vigilance to help reduce exposure,” explains an NPMA source.

To prepare for—and prevent—pests no matter where you live, the NPMA recommends storing your food in airtight containers, not letting garbage accumulate, and immediately cleaning up spills. Also, make sure your home is free of these things you didn’t know were attracting pests.

Some home maintenance tasks can also help keep pests out, like fixing leaky pipes, eliminating standing water, and sealing all cracks that pests could potentially enter through. And, of course, if you do experience an infestation, the best thing to do is call a professional exterminator. You may also want to check out these 15 essential products for people who hate bugs.

Where Do Mosquitos Go in the Winter?

Pest Nightmares That Will Make You Cringe

How to Remove Super Glue from Almost Anything
What Is the Deadly Kissing Bug?
This Is How to Spot Bed Bugs in Your Hotel Room