How This Former Police Officer Fearlessly Rescued a Drowning Kayaker

Kevin O'Connor had been standing near the riverbank when he saw people frantically motioning toward the water. 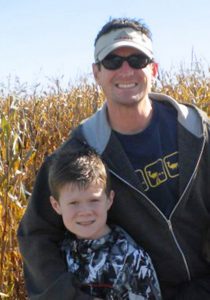 On a breezy Saturday in April 2014, former police officer Kevin O’Connor and his son, Ryan, were standing in a park near the Fox River in Geneva, Illinois. As Kevin gazed at the river, he caught sight of several people on the bank motioning toward the water. When he looked in that direction, he noticed a bright red kayak swirling in the turbulent water at the base of the Geneva Dam, 300 feet away.

Kevin assumed the kayaker had jumped out of the boat. “Then I heard sirens,” says Kevin, now 42. “That’s when I realized somebody was in trouble.”

He couldn’t see anyone in the river, but he sped toward the bank and splashed into the freezing water. About 150 feet from shore, he spied an object bobbing downriver. “I thought it was a life jacket,” he says. “When I caught up to it, I realized it was attached to a person.”

Now in water up to his neck, Kevin grabbed the man, who was floating on his back unconscious, under both armpits and held his head above the surface. Kevin struck the man’s chest again and again. After five hits, the man coughed up water and began mumbling incoherently. Battling the current, Kevin sidestepped his way toward the shoreline, repeatedly digging his shoes into the river’s rocky bottom. When he reached the bank, someone jumped into the river and helped Kevin lift the 200-pound kayaker over a six-foot brick retaining wall to waiting medics, who whisked him away in an ambulance. The man recovered, but a friend who was kayaking with him died after being trapped underwater near the dam.

Kevin pulled himself up to sit on the shore beside Ryan, who had followed his father’s path down the river. “When I caught my breath, I realized I saved someone’s life,” Kevin says.
In December 2015, Kevin received an award from the Carnegie Hero Fund Commission. “Lots of recipients lost their lives [saving someone],” he says. “Being put in the same category is very humbling.”