18 Portmanteau Words You Never Thought Of

Love going out for brunch, staying at motels, or playing Pokémon? We bet you didn't know that all these words have something in common—they come from other words that have been put together.

Whether or not you knew that this is what they’re called, a portmanteau is a word formed by the combination of other words. The new word draws meaning from the words it comes from, creating a word that’s clever and often slang-y—but not always! In fact, plenty of sneaky portmanteaus float around in our daily vocabulary, just like these palindrome words and acronyms. You’re probably well aware that words like spork, rom-com, and glamping come from two others put together, but did you know that these 18 others were also portmanteau words? While you’re brushing up on your vocabulary, check out these pangram and malapropism examples as well.

Wouldn’t you know it, portmanteau is an autological word—a word that describes itself. That is, portmanteau is a portmanteau! It comes from the French words porter and manteau, meaning “to carry” and “cloak”/”coat,” respectively. Yes, neither of those have anything to do with words, but the primary, more literal definition of portmanteau is “a large trunk or suitcase.” The first person to use the word to describe a word was one Lewis Carroll, the wordplay-loving author of Alice’s Adventures in Wonderland. 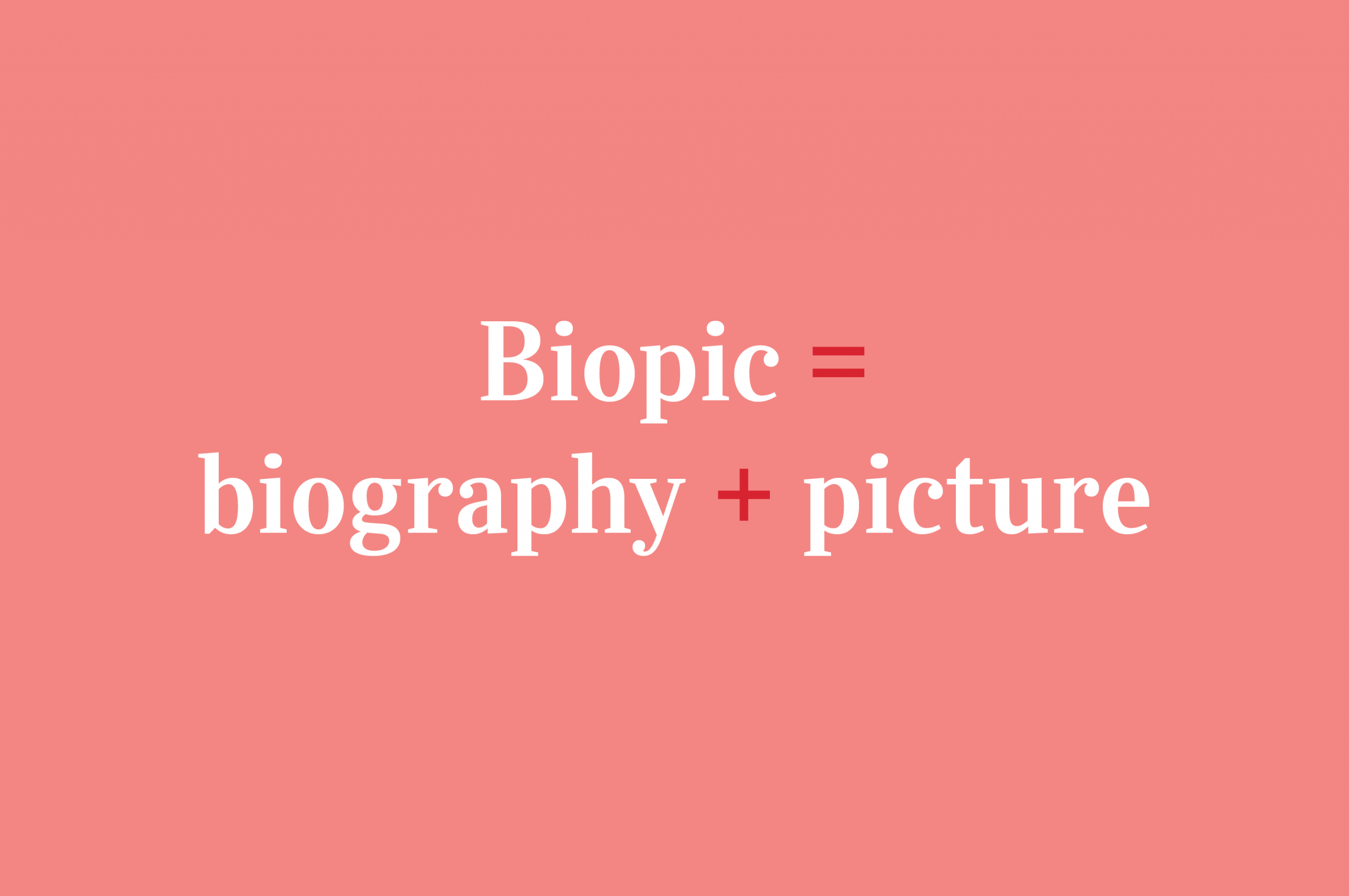 Movies about the life of a specific notable person are being released pretty regularly these days. When you hear this now-common name for them, it’s easy to forget that it’s a portmanteau of biography, or biographical, and picture (especially since we really don’t call movies “pictures” anymore). We get why this was given the portmanteau treatment; that’s a mouthful!

RELATED: 13 Words That Can Be Pronounced Two Ways

This common cosmetic surgery’s name has an almost branded feel to it, but it’s just a portmanteau of botulinum toxin.

This is a common word used to describe a super-smart person. The brain bit is obvious, but did it occur to you that the last two syllables derive from maniac? Somebody—some brainiac, dare we say—was having some fun with puns here! (Fun fact: The Superman character came before the actual common noun!)

Brunches have become such a big deal in our culture that it’s easy to forget what a simple, quintessential portmanteau word this is, born from breakfast and lunch. Brunches have taken on a life of their own (and certainly sometimes seem to be more about the beverages than the food consumed), more than simply a between-mealtimes meal.

RELATED: The Difference Between “Dinner” and “Supper”

A specific type of dress-up where people take on the persona of a fictional character, often for a big event like Comic-Con, cosplay comes from costume and role-play. 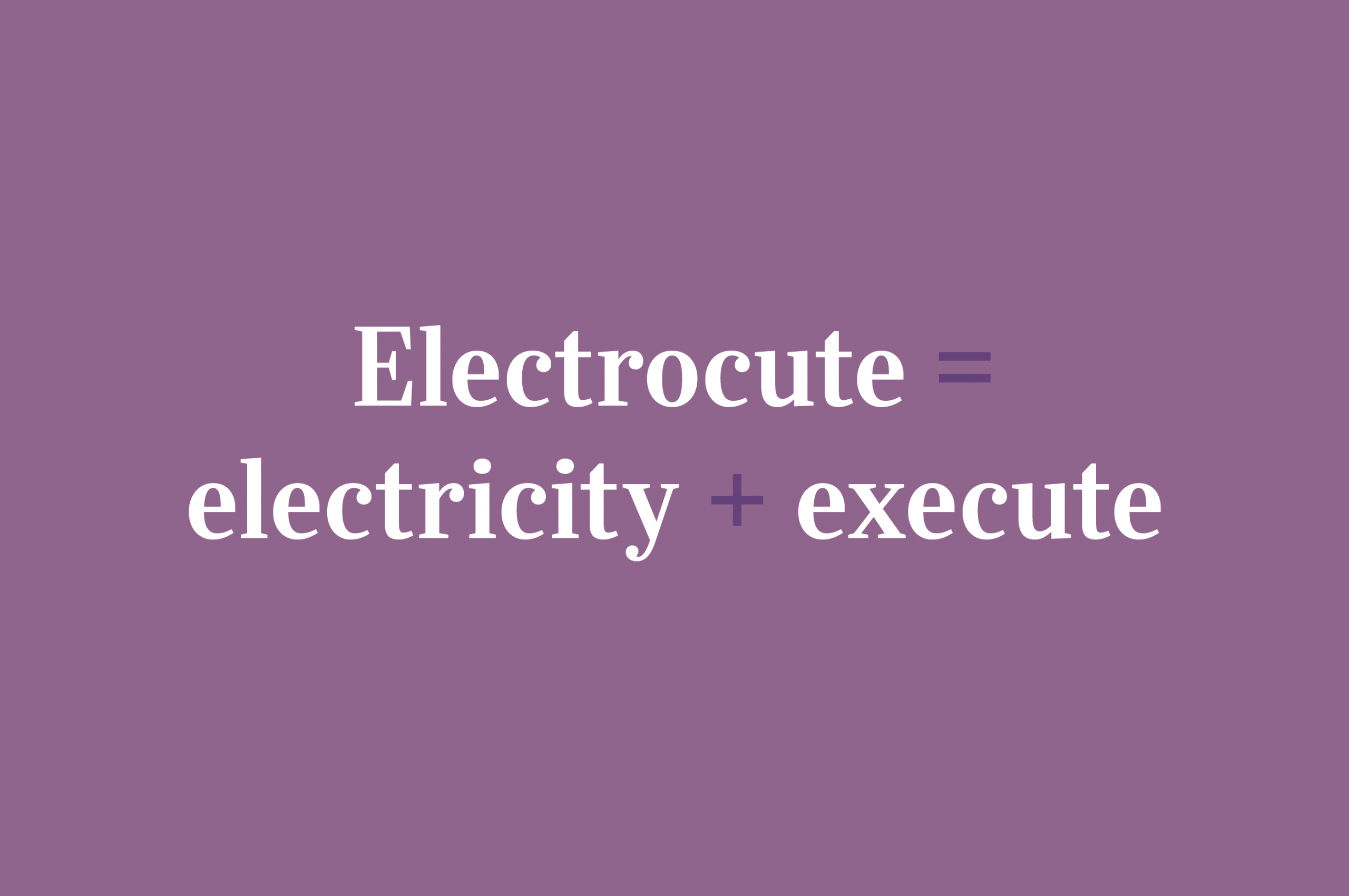 In an example of a word whose meaning has been diluted over time, electrocute comes from electricity and, yes, execute. It specifically denotes death by electric shock. While it’s come to be accepted as meaning just “injure,” too, going by the original intent of the word, if you experience a strong electric shock and you’re still alive afterward, you technically haven’t been electrocuted.

RELATED: 25 Words That Don’t Mean What You Think They Do

This unsavory practice was named, perhaps karmically, for the man under whose tenure it started—and, of all things, salamanders! The fifth vice president of the United States was a Democratic-Republican named Elbridge Gerry, who was governor of Massachusetts before becoming VP. During his term, the legislature reorganized the legislative districts, including one in Essex County that resembled a salamander. The Boston Gazette published a cartoon calling it a “Gerry-mander.” That’s the origin of the word. Seriously.

This common term for an article, usually online, composed of several items—a list-article, if you will—is a portmanteau that’s exploded into popular use recently.

RELATED: The Most Annoying Word in English

You might think that hotel and motel are just words for overnight lodging with arbitrary first letters. While hotel comes from the French hôtel, motel is a 20th-century portmanteau combining the existing hotel with motor. This was in response to the rise in cross-country highways and the need to accommodate roadside travelers.

Nope, newscast is not a stand-alone word! It comes from news and broadcast, and first popped up around the late 1920s. 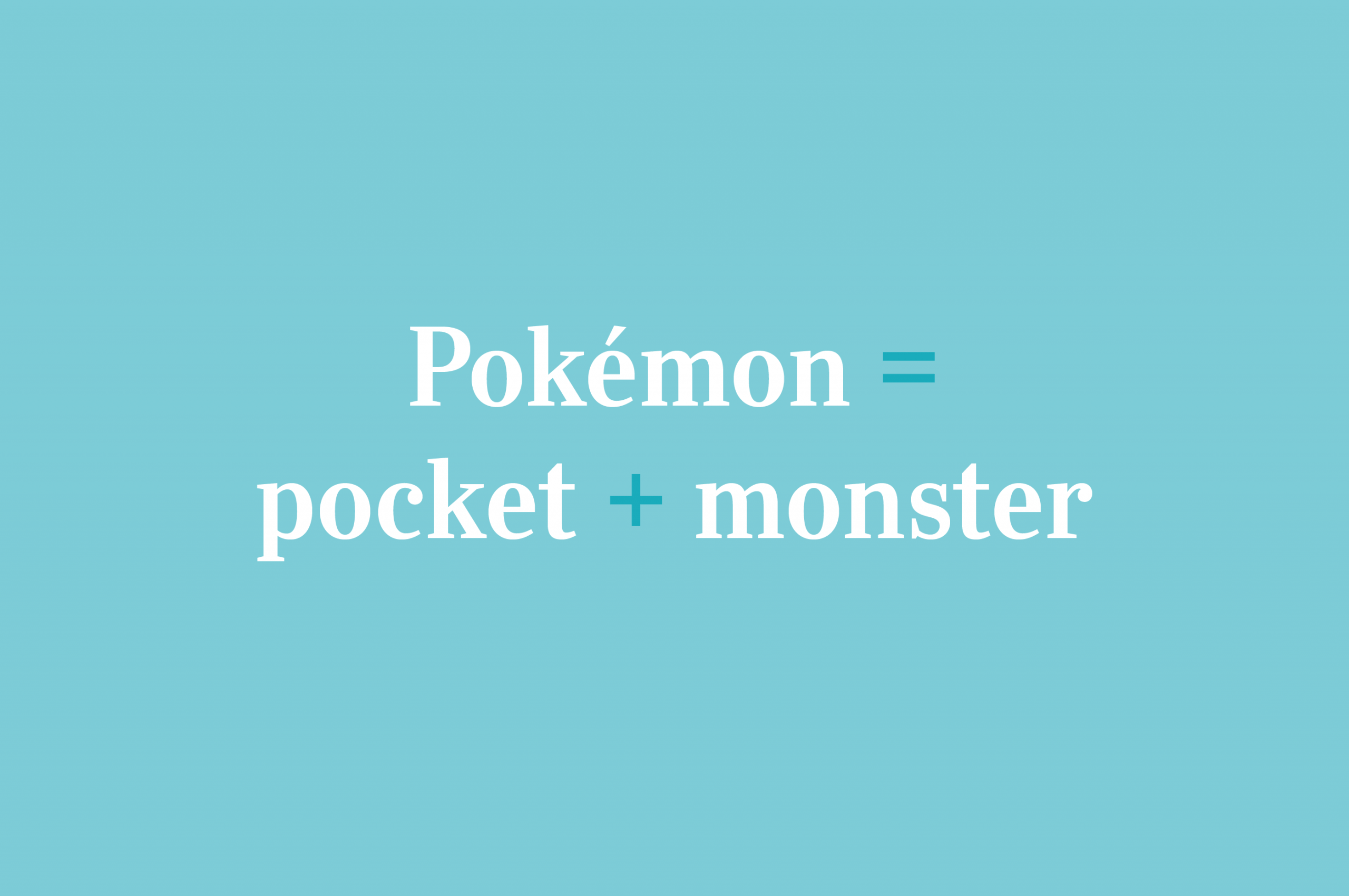 This massively successful video game franchise has a name that’s become ubiquitous, but its origin is delightfully quaint. It’s a combination of pocket and monster, hence how the Pokémon trainers are able to summon the creatures from pocket-sized Poké Balls.

Whether or not you already know that Popsicle is one of the words you didn’t know were trademarked, now you know it’s a portmanteau, too! Coined in the 1920s, the word is a combo of pop (as in lolli-, not in reference to noise or bursting) and icicle. 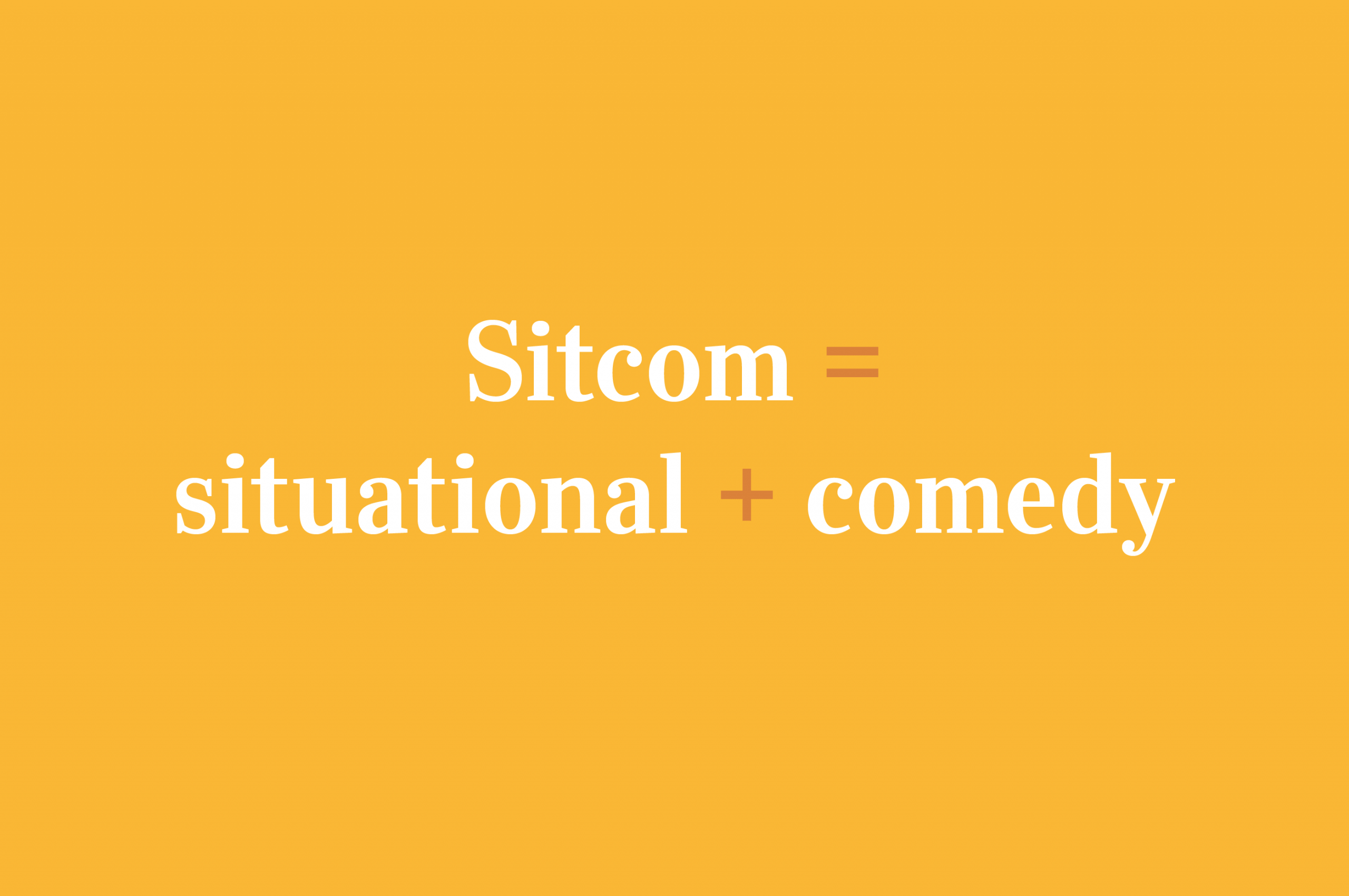 Where are my WandaVision fans?! Not once during this Marvel adventure do they refer to the show-within-a-show as a situational comedy, but that’s what this very common portmanteau is short for.

Ooh, a one-syllable portmanteau! Smog refers to a thick, often pollutant-ridden smoky fog. Yup, smog is a combo of smoke and fog! Fun etymologically, not so much in real life.

This might just sound like one of these onomatopoeia words, but it actually comes from two distinct, but similar, other words. Splatter is formed from splash and spatter, and it dates back to 1785. Interestingly, its progenitor, spatter, is a word we tend to use quite a bit less than splatter today!

Whether you use this word as a verb, a noun, or both, you may not know the two words it comes from. According to Dictionary.com, stash is a mash-up of stow and cache. Since it doesn’t come from cash, it’s interesting that it ended up as stash and not stache—which, of course, is a nickname for mustache.

Telethons aren’t super common nowadays, but even when they were, you might not have consciously known that the word was formed from television and marathon.

RELATED: 20 of the Toughest Tongue Twisters in English

Hardest Words to Spell in English

Equality vs. Equity: What’s the Difference?