The 10 Craziest Things Professional Window Washers Have Ever Seen 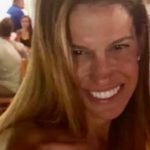 From outrageous to scandalous to hysterical, check out the real-life #awkwardmoments these professionals have witnessed on the job. 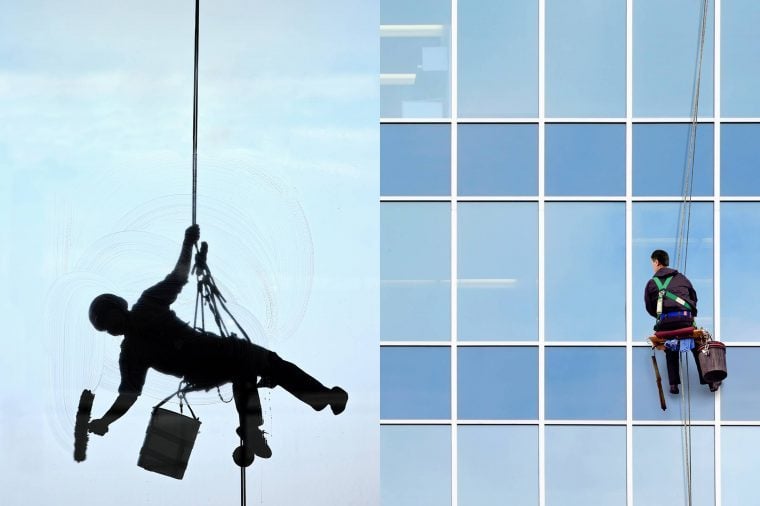 “I once was cleaning windows and came up to the second floor window and the husband was on the toilet. I quickly got away from the window and wasn’t sure if he had seen me or not, was hoping he didn’t. I finished the job, and he starts counting cash for payment, and says, ‘Don’t worry, I washed my hands.'” —Clearview Washing, LLC

Ahead by a nose

Mirko of Sunstruck Window Cleaning told the The Sydney Morning Herald about a time he was cleaning large panels of glass at an office on the North Shore that hadn’t been cleaned for a long time: “When I had almost finished, one of the employees walked into the glass thinking there was nothing there, and broke his nose. It was funny and horrific at the same time. He was so embarrassed. I said to him: ‘That’s the best compliment you can give me.'” (Want your windows just as clean? Try these tricks to clean even the toughest windows.)

“There is nothing more embarrassing than being on a lift and cleaning windows at a retirement center and accidentally seeing Grandma or Grandpa in their birthday suits sleeping because they didn’t close the shade. You’re simply praying they don’t wake up naked and afraid…” —E-Z Window Cleaning, Waukesha, Wisconsin   These are the craziest things Walmart employees have ever seen. 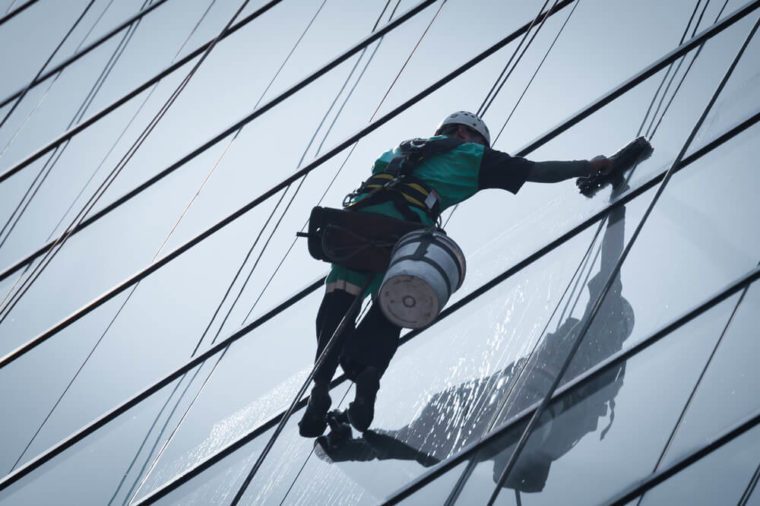 No shame in their game

Window washer Erik Brown told The New Yorker that he’s caught quite a few workers slacking off at their cubicles: “I’d say that on three out of 10 computers that face windows, someone’s playing solitaire.”

One window washer gives a description to The Seattle Times about his trip down the rig on a medical tower, where a woman was undergoing a gynecological exam: “She and the doctor saw me and started laughing,” he says, shaking his head at the memory. These are the funniest things that have ever happened at the doctor’s office.

“A man cleaning the windows of a house in Cardiff, England, was outside the bedroom window while a couple inside were watching an X-rated movie dressed as characters from the movie Grease,” a window cleaner told the U.K. website Reveal.

“One window cleaner looked through the windows of a conservatory to find the family’s pet dog in labor and giving birth to her litter. As no one was at home, he had to call them, advising them to make a speedy return home,” according to Reveal. 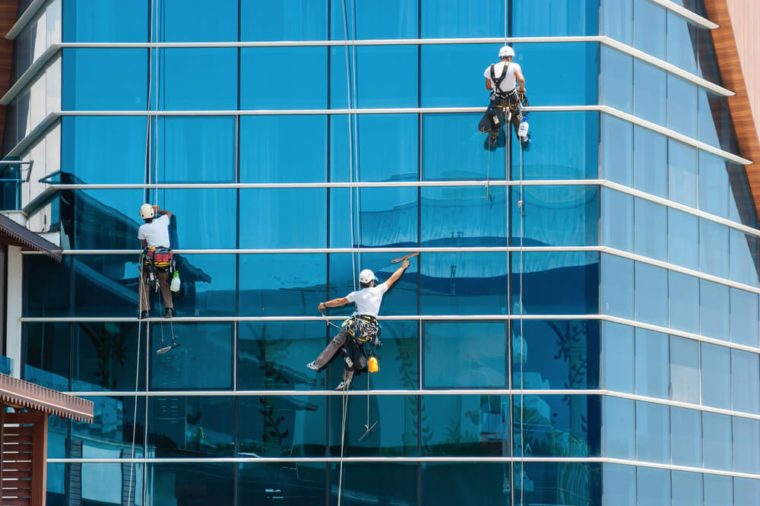 A guy writing into Window Cleaning Resource recalls the incident that left him dazed and confused: “The only funny thing I recall happening to me when cleaning windows is the one time I walked into the bedroom of one of the teenagers. He and his brother were doing bong loads, with the mom downstairs completely clueless. They’re like—please don’t tell our mom!” You won’t believe the crazy—and often creepy—things home inspectors have found in people’s homes.

Another window cleaner confessed to Express that while he was cleaning windows in high school, he was shocked by what he saw when he realized he was peeking inside the bedroom belonging to the most popular girl at his school. “When I got to her room it was a MESS. I couldn’t see the floor because it was covered with clothes and fast food bags. The weirdest part was seeing her underwear piled up on the windowsill. I just used my tools to brush it all off. I don’t know what the hell it was doing up there.” (If you think underwear on a windowsill is odd, you won’t believe the things that Victoria’s Secret staffers have found in the store’s dressing rooms.)

One window washer saw more than dirty screens when he showed up for work: “I saw a woman exposed. I was more embarrassed than her. I tried not to look, but she loved the attention and had not a care in the world.” —Thompson Touch Window Cleaning. Next, learn the craziest things drive-thru workers have seen at work.

Hope Daniels
Hope Daniels is a contributor to RD.com's Lifestyle section, where she writes about life’s gifts and slips. From the depths of personal routine habits to a hilarious look at social blunders her articles have also appeared on partner sites, the healthy.com, family handyman.com and msn.com. Her work in parenting and pop-culture has also been published on WEtv.com and ScaryMommy. She earned her BA in Journalism from Indiana University.