A Reader’s Digest Classic: Professor Terry and the Lady in Brown

Strangely enough, Professor Ter­ry's uncompromising pressure, which often seemed tinged with viciousness, did not make us bitter toward him. In fact, a deep affection set in for the man. 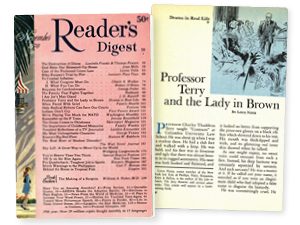 Professor Charles Thaddeus P. Terry taught “Contracts” at Columbia University Law School. He was about 55 when I was a student there. He had a clubfoot and walked with a limp. He was bald, and his face was so ferocious and ugly that there was almost beau­ty in its rugged asymmetry. His nose was both hooked and flattened, and it looked no better from supporting the pince-­nez glasses on a black rib­bon which shivered down to his vest. His mouth was thick­lipped and wide, and its glistening red inner skin showed when he talked.

As one might expect, no sweet voice could emanate from such a face. Instead, his deep baritone was constantly squeezed by sarcasm. And such sarcasm! He was a master at it. If he called out your name, it sounded as if you were an illegitimate child who had adopted a false name to disguise the bastardy.

He was unremittingly cruel. He humiliated. He taunted. He ridiculed. But how he taught! How he made you understand the majesty of the law and its philosophical striving for justice!

He used the Socratic teaching technique, asking questions, never giving answers. You had to find your own way, but he deliberately led you into byways so that you would learn your own way back and really understand the terrain. And no mat­ter which way you answered, a bar­rage of questions threw doubt on your conclusion. H e would begin with the most elementary lesson in contracts.

“It is a meeting of the minds, sir—an offer by one party which is accepted by another.”

“Does the contract come into ex­istence the moment the minds meet?”

“Oh, it does, does it?” His snarl was like the sudden appearance of dark clouds preceding a storm. “Sup­pose A offers to sell his car for $3,000 and sends his offer in writing to B. B writes his acceptance and puts it in the mail. Is that a contract?”

“Yes, sir. Because their minds have met on the deal.”

“Even though A has not yet re­ceived B’s letter of acceptance?”

“Suppose that A changes his mind and sends B a telegram withdrawing his offer, and the telegram is re­ceived by B before his letter of acceptance reaches A? Is there a contract?”

“Yes, sir. Their minds met on the offer when B mailed his acceptance.”

Angrily, “But how can the offer which has been withdrawn by tele­gram be accepted? What is there to accept? Has not the offerer the right to withdraw his offer before the con­tract has been consummated?”

“Then doesn’t it follow that since A has withdrawn his offer, there is nothing to accept?”

“So you would change your pre­vious answer, Mr. Nizer?” The name was pronounced so as to be synonymous with dunce.

Professor Terry stared at me for a long time. Then he called on another student.

“Mr. Thomas, do you agree with Mr. Nizer’s last answer?”

“Well, because the offer was with­ drawn by telegram, there was noth­ing to accept.”

“Where do you get that idea from? If I hold out a proposal and you agree, haven’t our minds met at the instant you accept? Besides, B’s acceptance was not a mere men­tal concept. He wrote it out and placed it in a mailbox, beyond his power to control. Doesn’t that make a difference?”

“Perhaps? It would, wouldn’t it?” The booming voice exploded like a cannon shot, reverberating around the room.”

Professor Terry gave Thomas a long stare, then turned to another student. “Mr. McGraw, with whom do you agree? With Mr. Nizer’s final answer, or with Mr. Thomas’s final answer?”

“I think there is a contract when B mails his letter of acceptance. Nothing thereafter can change that fact.”

“Nothing can change that?” asked Professor Terry. The red glistened from his inner lower lip. “Suppose after B has mailed his letter of acceptance, he telephones A and says, ‘I’ve decided not to buy your car. Ignore my letter, which you will receive.’ Is there still a contract?”

Professor Terry’s face lighted up, announcing that the trap had been sprung. “Then suppose A sells his car to C. Can B sue for breach of contract?”

“Well…” McGraw, too, changed his mind.

It didn’t matter what position the next student took. He was run down just as mercilessly. Eventually, it turned out that all of our answers were right. Some states follow one rule, some another; what would be held to be a contract in Massachusetts would not be in New York. So, even in the very first session, we learned that the law was not an exact science. It was a philo­sophical pursuit of moral precepts, and the logic used in the quest was not irrefutable.

Strangely enough, Professor Ter­ry’s uncompromising pressure, which often seemed tinged with viciousness, did not make us bitter toward him. In fact, a deep affection set in for the man. He encouraged our discussions with him after the lecture, as if he recognized that a runner who had run a hard race could not stop suddenly but must taper off. Crowded around him, we knew that the punishment he had meted out was for our own good. When, in the course of that more informal exchange at the podium, he put his hand on our shoulder, we felt as if we have been knighted.

Professor Terry became a legend at Columbia Law School. Thou­ sands of students who passed through his classroom over the years remembered him above all other teachers. But our class was privi­leged to participate in a special event—an event that revealed a dimen­sion no others had seen.

When Professor Terry announced his retirement, Dean Harlan F. Stone and the faculty decided to give him a farewell at which an oil painting of him would be hung in the library. Terry asked that the students be invited. We crowded into the library eagerly, but we had no inkling that what would happen would become perhaps the most moving experience of our young lives.

Seated on a raised tier with the professors was a lady all in brown. A beautiful young girl is an accident of nature, but a beautiful older woman is a work of art. She was a work of art, inexpressibly beautiful. Her per­fectly proportioned features were en­hanced by gentle, curving white hair which added aristocracy rather than age to her face. Her neck was long, and she held her head regally high, but without a trace of hauteur. She sat motionless and attentive. We wondered who she was. All eyes were upon her, until the ceremonies and speeches drew attention away. When they concluded, with grace and not a little solemn dignity, Pro­fessor Terry rose to speak.

He stood motionless for a long time. We had never seen his face look as it did then. It had lost its severity. It looked pink and kind. The mouth was not a snarl. His voice, too, was different. It was soft, without a trace of belligerence or sarcasm. After expressing gratitude for the painting, “which will keep fresh the memories of the torture I have imposed,” he explained that he loved the law, and had the feeling that every student who had com­mitted himself to the greatest of all professions was his son. Therefore, out of love, he had been remorseless in his training.

The mind can grow only if it is challenged, he said. Then, in self­ defense, it calls upon its reserves of imagination and resourcefulness. The student must find his own way, as he will have to do in the outside world. That was why he was abra­sive. The world outside would be more abrasive. H e could not afford to be tolerant of anything but the best that was in us. He put into words the high purpose that had motivated most of us to enter the law, and he told us that his great satisfaction in life was to see his stu­dents later become brilliant lawyers, judges and public servants. He con­tinued in this vein—an unaffected outpouring of idealism.

Then the unexpected happened. He took one of his long pauses, which had been so meaningful in the classroom. He turned toward the beautiful woman in brown:

“I have been expressing my grati­tude to my students, my colleagues and my school. But it is only a tiny portion of the gratitude which fills my heart. I cannot bid you all good­ by leaving unsaid that which is the most important thing in my life.”

He looked down at his foot and continued, his voice hoarse with emotion. “At the age of 30, I met the most beautiful girl I had ever seen. I was stunned and in love with her immediately. But I considered her unattainable for one such as I. Na­ture had not endowed me with any of the graces of appearance. I dared not even contemplate the au­dacity to confide my feelings to her. I was happy just to think of her, and this gratification I indulged in day and night.

“But she ordered events so as to bring us together. With delicacy and sensitivity, she told me that she knew how I felt about her, and that she was more in love with me than I could possibly be with her. I have been blinded by ecstasy ever since.

“Through the years that followed, we have reared a family in supreme happiness. She has dedicated her life and her love to me without reservation or pause or even for the vicissitudes of life. Teaching, writing and practicing law have been temporary absences made bearable only because I knew I was returning to her. Every thinking moment has had the silent musical accompaniment of her presence.”

His voice grew hoarser as he struggled to eliminate the quiver that was entering it. “So, although it is farthest from my nature to discuss the most private of all emotions in public, I cannot in this leavetaking do other than tell you that I owe all my happiness to her, that she has…”

He turned his head toward her, and his eyes completed the sentence as if words could not possibly convey the depth of his feeling.

Tears were running down her cheeks, but she did not move. Her eyes were clear despite the streams, and she looked steadily at him. Their gazes met and locked in long silence. Then, without another word, he sat down.

No one applauded. We just sat there. After a few moments, everyone got up slowly and left. 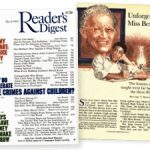 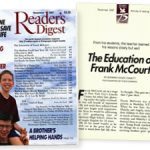 The Inspiring Story of How Frank McCourt Won a Pulitzer