Bridgerton: Who Is Queen Charlotte? Was She Britain’s First Black Royal?

Yes, Black royals existed long before Meghan Markle married Prince Harry—and Queen Charlotte, the wife of King George III, was one of them.

With its colorblind casting, decadent showcasing of Regency London Era social norms, and intriguing narratives, Shondaland’s Bridgerton, which airs on Netflix, instantly captured the world’s attention. Not only does the series showcase an alluring interracial couple in the main plot, but it also centers around storylines that succinctly depict double-standards for the haves and have nots, the emotional and psychological residue that can accompany being a part of high-society, and yes, a Black Queen Charlotte.

Many have long speculated that Queen Charlotte of Mecklenburg-Strelitz was of African descent; now Bridgerton’s bold and audacious portrayal of her has presented the perfect opportunity to dig further into who Queen Charlotte really was. Can’t wait for the next season to start? Check out what’s ahead for Bridgerton Season 2, according to the books.

Queen Sophia Charlotte of Mecklenburg-Strelitz, a small northern German duchy, was the youngest daughter of a duke and a princess who went on to marry England’s King George III. According to many historians, Queen Charlotte was, indeed, of African descent and was often portrayed as a woman of color in portraits. “With features as conspicuously Negroid as they were reputed to be by her contemporaries, it is no wonder that the Black community, both in the United States and throughout the British Commonwealth, have rallied around pictures of Queen Charlotte for generations,” writes Mario de Valdes y Cocom, a historian of the African diaspora, in PBS Frontline. “They have pointed out the physiological traits that so obviously identify the ethnic strain of the young woman who, at first glance, looks almost anomalous, portrayed as she usually is, in the sumptuous splendor of her coronation robes.”

Queen Charlotte was a direct descendent of Margarita de Castro y Sousa, a 15th-century noblewoman from the Portuguese royal house. As proof of her African ancestry, Valdes explains that art historians believe the Black magi featured in 15th-century Flemish paintings were in fact members of the Portuguese de Sousa family, who would have served as models for the artist. To keep up with modern royalty, check out our British royal family tree.

The importance of the casting of Queen Charlotte is not lost on her castmates. Adjoa Andoh, a Ghanian-British actress who plays Lady Danbury in Bridgerton, says of the queen’s ancestry in New African, “Queen Charlotte, the wife of George III, was the descendant of an African woman and Alphonso III of Portugal. She was mixed-race. So it’s very exciting that we have a mixed-race actress, Golda Rosheuvel, playing the queen in Bridgerton.” Andoh goes on to tell of Britain’s anti-slavery history in the 18th-century, including Ottobah Cugoano, an author, abolitionist, and activist from the Gold Coast (what is now known as Ghana), and Ignatius Sancho, who was a composer and abolitionist. “…for me the importance of the way the show has been cast, is to put back into people’s understanding that there was an African presence at all levels of society in Britain at that time,” she adds.

It’s not only the appearance of Bridgerton‘s Queen Charlotte that is garnering attention; even her exquisite gowns and fantastical wigs pale in comparison to her giant-size on-screen personality and captivating persona. It’s hard to imagine that a 19th-century royal had all of that wit and pizzazz, and it’s quite entertaining to watch in the series. However, history indicates that the real Queen Charlotte was a bit more demure. She loved beautiful gardens, had a penchant for botany, and was empathetic and compassionate; she opened several orphanages.

In Bridgerton, aspects of the Queen’s public poise contrast with her private struggles with King George III’s mental state in several scenes. “In public, it’s very lavish. It’s very fun. It’s very naughty. It’s very regal. There’s a position of power,” actress Golda Rosheuvel, who plays Queen Charlotte, shared with Insider. “In private, I think you see her as a real human being who desperately, desperately, desperately loves her husband and is having to deal with the unknown. She’s a rounded character.” Many historical accounts support the notion that Queen Charlotte truly loved King George III—they had 15 children together—and she was committed to him until her death. Despite having so many offspring, George and Charlotte’s children went on to become embroiled in “the succession crisis of 1817,” one of the top royal family scandals. 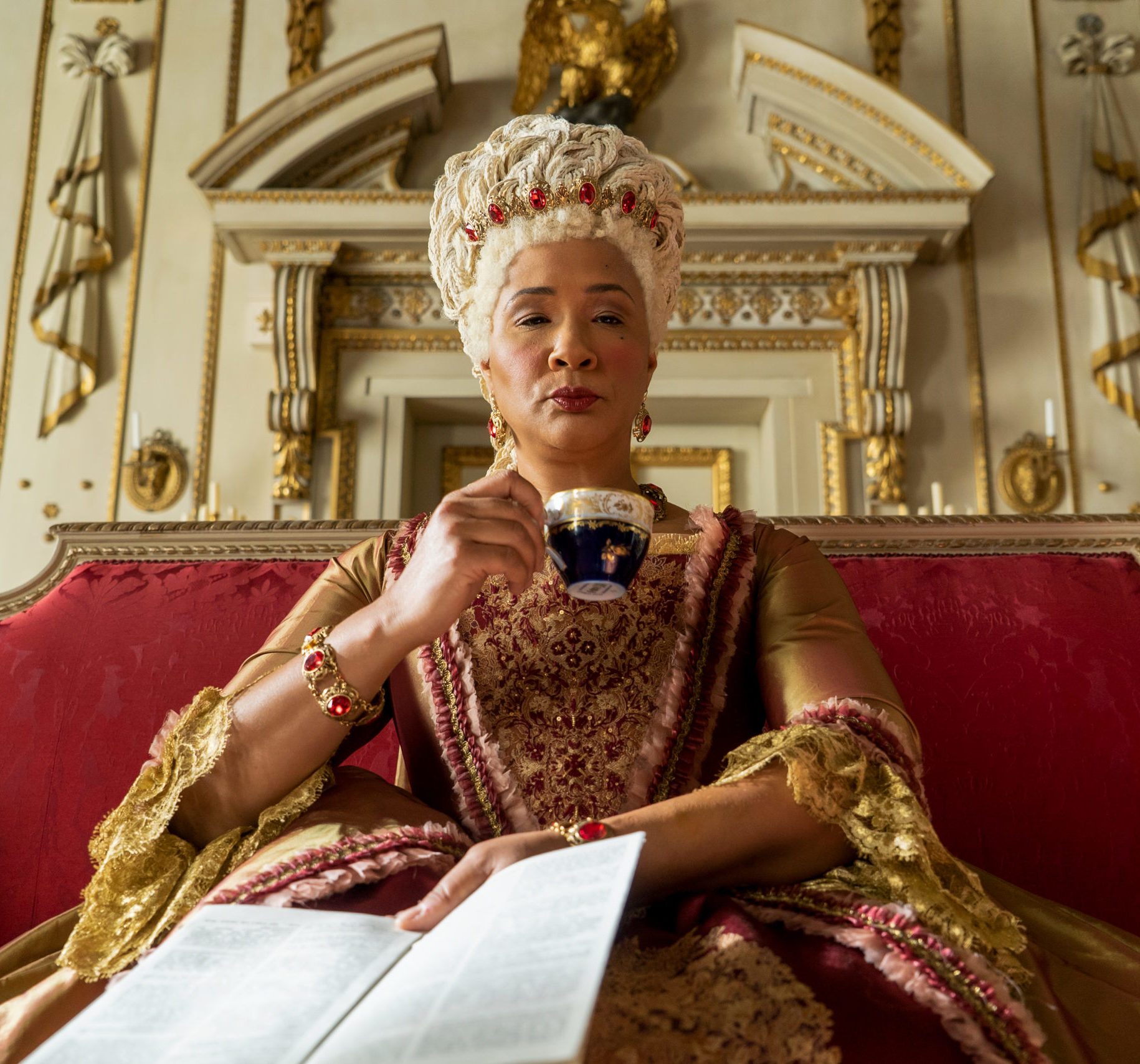 Courtesy NetflixThough Queen Charlotte is not mentioned at all in Julia Quinn’s Bridgerton novels that the Netflix series is based on, many wonder what the author has had to say about Queen Charlotte’s being portrayed as Black in the TV series. “I go back and forth between wishing I had actually written her in the books, and then being glad I didn’t, because I don’t know if I could have done as good a job,” Quinn told OprahMag.com. Quinn very much approves of Rosheuvel’s portrayal of the queen and wrote her a fan letter after seeing the show.

The casting choices made in Bridgerton, along with its portrayal of Black royalty, interracial love, and intimate relationships with partners from differing stations in life, are clearly working. Over 80 million people from around the globe see something in this series, and we like to think that says a lot about humanity. There’s something so naturally appealing and fulfilling about seeing people live and fight to love, no matter what color they are.

Can’t pass up a good love story? Check out these best romance novels of all time.

The Scandalous Story of How King George VI Became King

What "The Crown" Gets Wrong About the British Royal Family

Lynnette Nicholas
Lynnette Nicholas is a graduate of the University of Florida with a degree in English Literature with an emphasis on Theater Studies and Africana Studies. She currently works as a freelance reporter, and parenting and entertainment writer based in New York City. Her work has appeared in HuffPost Black Voices, Common Sense Media, Moms.com, and other publications. She enjoys writing about culture, literature, film, and TV shows that highlight strong matriarchs. Lynnette has a passion for literature and cinema, as well as an innate curiosity about their influence on culture and social norms.

What “The Crown” Gets Wrong About the British Royal Family