“I Went From Scrooge to Santa”: A Magical Tale of Transformation

Charles Edward Hall got the part of a lifetime when he was cast as Scrooge in the Radio City Christmas Spectacular. What happened next surprised everyone—especially him.

Twenty-eight years ago, when I was a young man in New York City, I had no Christmas spirit. I wasn’t a humbug or a bad person. I didn’t hate Christmas. But I was like many people: too busy to really celebrate it. Too determined. I wanted so badly to be a Broadway actor that I didn’t have time for anything else. Every morning, I woke up at 5 a.m., bought a loaf of day-old bread at Penn Station, and lined up at the actor’s union near Times Square with a thousand other people in hopes of landing an audition for three or four available parts. That was my job, every day, for three years—even at Christmas.

And then I was chosen for a part. A great part. I was chosen for one of the greatest parts in the history of Christmas: Ebenezer Scrooge. And it was in a big, wonderful show called the Radio City Christmas Spectacular.

I also had to play one scene as Santa Claus—the worst possible part, I thought, because Santa was so … good. So boring. But that was OK. I was so happy, I ran all the way back to my apartment and yelled to no one in particular, because I was living in a tiny room and sleeping on a single mattress with all my possessions in a milk crate: “I made it! I’m somebody! I’m Ebenezer Scrooge!”

I worked on my Scrooge. I scoffed. I raged. I felt fear when the ghosts came, and anger, and relief, and sadness, and regret. Near the end of the show, when Scrooge begs the Ghost of Christmas Future for another chance, I got down on my knees, and I cried real tears. When I was growing up, my father was an alcoholic, and my mother cried herself to sleep every night. Until that moment, I had never admitted to myself how hurt and angry and powerless that made me feel. I guess I wanted that second chance too.

But nobody cared. Don’t get me wrong. Critics loved the show, and the audience cheered, but nobody ever wanted to come backstage to meet Ebenezer Scrooge. No, they wanted to talk to Santa Claus.

Ebenezer Scrooge was just a character. As soon as I walked off the stage, he was gone. But Santa: He was real. It didn’t matter if he was in the play for only a few minutes or a few scenes, like he was the following year. People knew Santa Claus. He was part of their lives. And they loved him.

I’m not talking about just children. Parents would gasp when they saw me in my costume. Strangers would smile. One time, a news reporter broke down in tears when I walked into the studio. “I can’t believe I’m talking to Santa Claus,” she said.

Another time, a friend asked if her son-in-law could meet me. He’d been wounded in Iraq. (This was later, after I’d been playing Santa for 20 years.) When the young man arrived, he had a huge scar on the side of his head. His wife had to hold him steady as he struggled through the door. But when he saw me, the soldier took three huge steps and, without a word, hugged me so tight, and for so long, that I almost couldn’t breathe. That time, I was the one who cried.

I thought, He knows I’m not the real Santa, right? It dawned on me only later that maybe, in those moments, I really was Santa after all.

I know, I know. That sounds crazy, right? But it’s true. Scrooge was written out of the Christmas Spectacular after only four years, but I’ve been Santa Claus for almost three decades and more than 4,000 performances, and spending that much time as someone changes you. When you love a person, you can become that person and see the world the way he or she sees it. It happened to me during a show, when the stage curtain malfunctioned, and I had to improvise for an audience of 6,000 people. Suddenly, I found myself sitting with one little girl and talking with her about her life and asking her not just what was on her list but what she truly wanted for Christmas.

It also happened one cold winter day when I was out on the street in my normal clothes, just Charlie Hall, and saw an older woman slip and fall on some ice. Before I knew what was happening, I’d helped her up and offered to take her wherever she wanted to go. I noticed only afterward that she was probably homeless and that she needed my help more than I had realized. She took me to a church.

As I was taking off my beard one night, I said to my stage manager, “I wish I could wear this Santa suit all the time. If I did, I could never be angry or mean. I’d be a better person every day.”

It was only a passing thought, but it has stuck with me ever since. Santa Claus is the best part of me. He’s not just the role I play; he’s my role model. Scrooge may have unlocked the pain of my childhood, but Santa opened my heart to something better: a childlike wonder. He showed me goodness and joy. He said, “Look at the world, Charlie. Really look at it. And smile. Because there’s magic all around you. All you have to do is believe.”

I wanted to be Scrooge because Scrooge was interesting. Ebenezer Scrooge, I thought, would make me a better actor.

Instead, Santa Claus made me a better man.

Charles Edward Hall has been Santa Claus in the Radio City Christmas Spectacular since 1987. His first book, Santa Claus Is for Real: A True Christmas Fable About the Magic of Believing, a family-friendly fictional version of a year at the show (featuring the real Santa!), is on sale now. 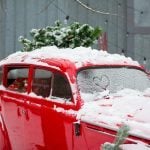