© © Steve Mason/Photodisc/ThinkstockIn 2011, residents of more than 50% of the cities, towns and villages in the U.S. cast © © Steve Mason/Photodisc/ThinkstockIn 2011, residents of more than 50% of the cities, towns and villages in the U.S. cast their votes in the inaugural Reader’s Digest We Hear You America campaign. The top 20 vote-getting towns received grants that allowed them to kick off (or complete) projects to make their communities even better places to live. This is one of those towns.

This year, the holiday season will be particularly special in Rancho Cordova, CA: There’ll be a new 30-foot tall, sparkling Christmas tree (replacing the tree that vandals destroyed last year) and the town will open its first-ever outdoor holiday ice rink, an unusual facility in California. “We’re excited to give everyone a lift during the holidays…and something new to the city,” said Robert McGarvey, the town’s mayor. “It will be a true holiday spectacular with an open invitation to the entire Sacramento region.”

Some of the tree’s ornaments celebrate the source of these seasonal treats: They display the logo of We Hear You America. Rancho Cordova received $40,000 in seed money from the campaign – and since then, matching funds from corporate donors have enlarged the coffers. With a 2-to-1 business-to-resident ratio, Mayor McGarvey explained that Rancho Cordova is a “different kind of community than many others,” with professional enterprises playing a central role in community life.

According to Shelly Blanchard, the executive director of the Cordova Community Council, the town has a “great belief in citizen-driven problem solving. When people gather in a common cause… there is great power to be found in the community.” It was this same spirit that helped Rancho Cordova incorporate eight years ago as one of California’s newest cities, then receive an All-American City title last year, and finally become a winner in the We Hear You America campaign. 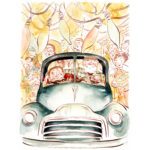 My Uncle Was a Man of Few Words, But Our Quiet Christmas Eve Drives Are Some of My Favorite Memories