A poignant Twitter conversation reveals the power of random acts of decency.

Matthew Cohen for Reader's DigestAs she walked onto the packed airplane holding her tiny infant—you know, the kind that cries for entire flights—Nicole Cliffe must have known she was a candidate for least popular passenger. And that was before her baby got sick and vomited all over her pants and seat cushion. “They had to BRING THE PLANE BACK to replace the seat and seat belt, and every­one hated me,” she later tweeted. But a simple act of compassion soon saved the day, and then some. A flight ­attendant not only spelled Cliffe by holding and comforting her baby but also lent the frazzled mom a pair of yoga pants to change into. “I firmly believe that she will go to heaven no matter what she may do in the rest of her life,” Cliffe wrote.

Bitten by the kindness bug, Cliffe tweeted her story and asked others to share their own tales of exceptional and unexpected kindness on her Twitter feed. Those appreciations, in turn, inspired others to respond with more personal stories, as well as with simple notes of support and gratitude. The result is a wonderful dialogue for our times—a corrective to the idea that our digital conversations are inevitably tarnished by raised and angry voices. In this story, niceness wins.

I was grocery shopping with my three-year-old and he really wanted some gummy treats. I explained to my son that we couldn’t afford it because Daddy lost his job. A man came up and said “You dropped this” and handed me a $50 bill.
—@Tiana_Smith

I was eight years old and at a public pool when some boys began making fun of me for being fat. As I walked away crying, this gorgeous college-age woman sprung to my defense and got them kicked out. She then had me hang out with her gorgeous friends. They were so sweet—sharing their Tab and their trashy magazines. They even painted my nails blue. Best of all, they told me I was pretty. —@madamradams

A repeat customer at Best Buy found out that we both had Crohn’s disease. He knew I’d been very sick and that my health care hadn’t kicked in yet and that I didn’t have a regular doctor. He sent me to his doctor and gave me $300 to pay for both the visit and the medicine I would need. —@thedoorgal

Matthew Cohen for Reader's DigestI’ll always remember the woman who gave me tissues when I was crying on the train. I was trying so hard to keep it together. Everyone else looked away but her. She handed me the tissues and said, “We’ve all been there, crying on the train. It sucks.” As she was getting off, she added, “Whatever’s wrong, it will get better. That doesn’t mean anything right now, of course. But it really will.” She was this regular business-casual lady, but she was a hero to me. Also! She inspired me to always carry a little pack of tissues in case I see someone crying. —@danielleiat

I can’t even tell this story and not cry. I used to manage an LGBT bookstore. One night, a caller says he thinks he might be gay and is considering self-harm. We were not a crisis center! But as long as we’re talking, he’s safe, right? So I talk to this guy and I answer questions, and I try to be encouraging, and I’m maybe sounding a little frantic, and I’m definitely ignoring the customers in the store. Suddenly, this angel of a woman puts her hand on my shoulder and asks for the phone. “My turn,” she says. And she, this 50-something lesbian, talks to this stranger on the phone. And a LINE FORMS BEHIND HER. Every customer in that store knows that call, knows that feeling, and every person takes a turn talking to that man. That story comforts me so much to this day. —@TweetChizone 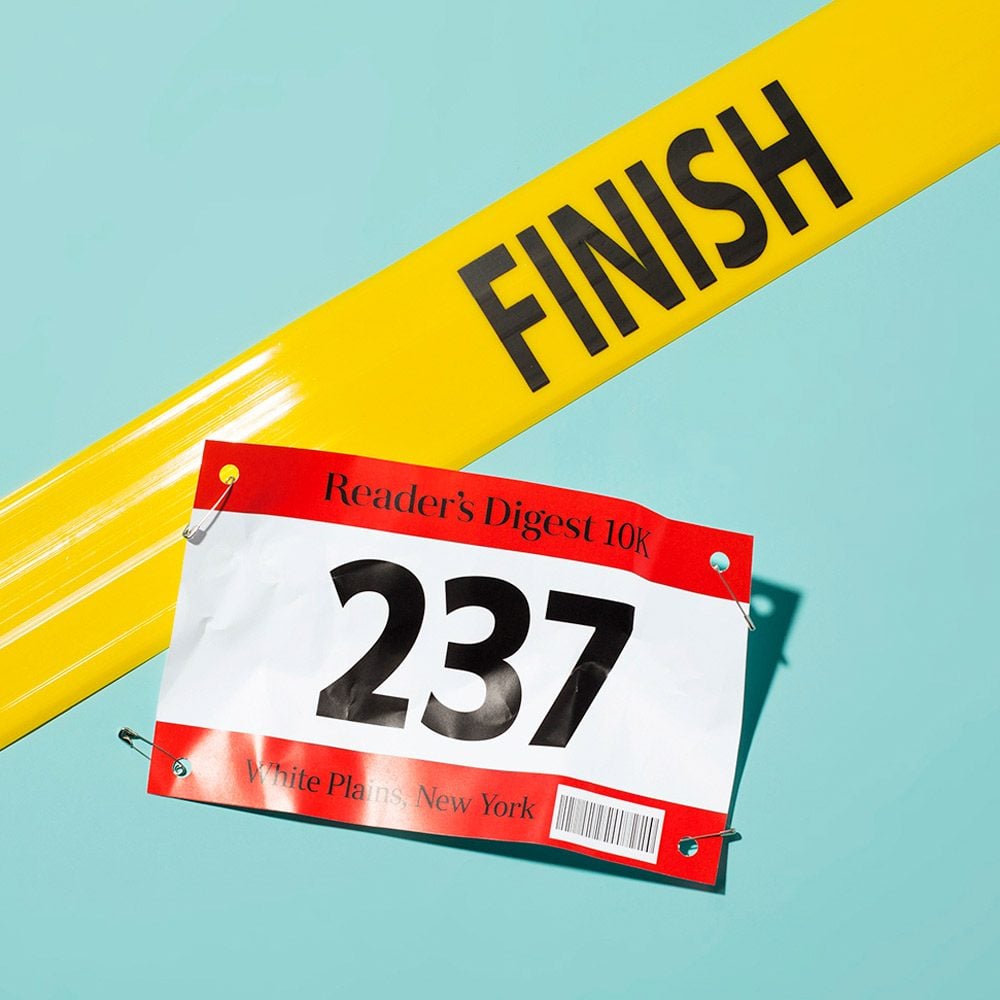 Matthew Cohen for Reader's DigestI ran cross-country. I was a senior and on the brink of being on the team headed for states. This race decided it. A girl on my team was just ahead of me. I couldn’t catch up. She slowed, grabbed my hand, pulled me in front, and jettisoned me across the finish line so I could go instead of her. —@jmh278

I once walked by a burly construction worker who called out, “That color really works on you!” —@bananafitz

One time I was driving without a seat belt, which I often did. I pulled up at a stoplight and an older man in the car next to me motioned for me to put my seat belt on. He pressed his hands together and said please. I always wear a seat belt now. —@theaudreyshore

I had my first panic attack in the bathroom at Sea-Tac airport. A woman asked if I needed anything. I jokingly replied, “A Xanax.” She said OK. She left and came back with two Xanax and a banana. She then gave me her business class seat, while taking my economy seat. I cry when I think about her. —@Kaytease_24

I fainted on the subway once. A kind elderly woman, who spoke no English, held my hand and fed me grapes while we waited for the EMTs. When they finally came, she patted my hand three times and put my hand on her heart before leaving. —@laurenarankin

Matthew Cohen for Reader's DigestIt was my first semester of journalism school and I was second-guessing my decision to pursue a writing career. One day, I handed my debit card to the barista at the coffee shop. He looked at my name and said, “That sounds like the name of an author.” Almost cried on the spot. —@beccabeato

Dude in a truck honked at me at an intersection while I waited for an older woman to cross the street. I gave him the finger. He honked again. I repeated the gesture. He proceeded to follow me to a parking lot and block my car. I got out ready to throw punches. He got out. HUGE MAN. I thought, I’m dead. He put out his hand to shake. He explained that he honked but noticed his error when he saw the woman. So he honked again to say sorry. He followed me to personally apologize so he wouldn’t ruin my day. We shook hands. Changed me forever. And I was glad he didn’t waste me. —@MrPaulBae

I was in the middle of a silent panic attack while waiting on a flight. Another passenger’s assistance dog evidently noticed my condition and pulled its person to come by me. That dog put its head on my lap for 20 minutes until I felt better. —@JudgeYouHarshly

I was flying from Montgomery, Alabama, to Columbus, Ohio, with my year-old baby. It was Christmas, and my then-husband was deployed in the Middle East. I was tired and depressed—just a mess. The flight got delayed due to snow, then canceled. Sitting around the gate and waiting for an update, I got to chatting with a guy who was in the Army and headed home to see his little girl. Then came the announcements: A bunch of people got seats for the next flight, but not me. My tired daughter was crying and I was barely keeping it together when the airline rep called my name and gave me a ticket. That Army guy gave up his seat for me. I insisted he take the ticket and see his family. He refused, saying, “Any military husband would do the same for my wife.” —@twoscooters

Stories About the Kindness of Strangers

Photos That Show the Power of Kindness