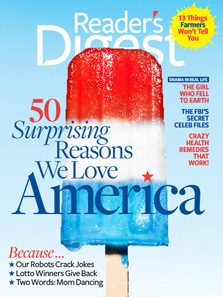 Enjoy a sampling of bonus content from the July issue of Reader’s Digest. You can also find much, much more in our digital editions including original photos, videos, and interactive reading.

A large study of 2,692 U.S. adults found that those eating a lot of omega-3s added two years to their lives. Try walnuts,
flaxseeds, salmon, and spinach for a boost.

When the hashtag #nowthatchersdead trended after the former U.K. prime minister Margaret Thatcher died, many misread it as “now that Cher’s dead.” Whoops! See who else made the celeb-death rumor mill.

A British study found that one smile can boost your mood as much as 2,000 bars of chocolate. Which do you think your dentist would recommend?

The classic tune “Under the Boardwalk” almost never was. Lead vocalist Rudy Lewis died the night before The Drifters were scheduled to record the song, forcing the band to
impulsively call in former front man Johnny Moore.

• Ebert Was A Really Funny Guy »

The late film critic Roger Ebert was quick with the zingers! We’ve rounded up the best, including this one about Armageddon: “No matter what they’re charging
to get in, it’s worth more to get out.”

• Why Didn’t We Think of This Snack? Seriously. »

Coconut oil, which can do wonders for your waistline, also moisturizes skin, hair, scalp, and nails; fights acne; and even subs for deodorant in a pinch.

• How to Dry Flowers Instantly »

Put one bloom in a bowl with four cups of cat litter, then microwave on high for two or three minutes.

• Clues for Spotting a Liar

Among the microexpressions experts say to look for to identify a fibber are anxious blushing, lip nibbling, and rapid blinking—signs the brain is working overtime. (Pants on fire? Not one of them.)

Take a look at the making of our bakeless sweets story with this playful video.