Enjoy a sampling of bonus content from the November issue of Reader’s Digest, as seen on our Daily Digest page. 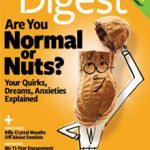 New studies link heavy social networking with overspending, overeating, and overvaluing others’ thoughts against your own. Solutions? Step away from the screen.

Leo Babauta, author of Focus and the blog Zen Habits, suggests writing the word focus on an index card and putting it on your desk as a simple, effective start to tackling your goal.

Dracula, The Scarlet Letter, 1984, and other titles get reimagined by clever designers—all the more reason to read up.

Here’s How to Save the Planet

Of all the offbeat ideas, we like astronomer Roger Angel’s theory that a 10,000 square-mile solar shade would reduce harmful rays. Mostly because we’re picturing giant Ray-Bans in space.

When the game maker recently wondered if today’s players would have the patience to miss turns while in jail, we sensed an opportunity to tweak the Chance cards in parody.

What Nutritionists Eat When No One Is Watching

What a Billion Dollars Can Buy You

From sports teams to Hulu, find out how far those zeroes can stretch.

This Viral Hack Shows You How to Keep Food Cold Outside
Now That His Kids Are Grown, This Dad Is Giving Up His Dad Jokes
These Fathers Formed “Dads on Duty” to Prevent Violence at a Local High School