A Stroke, A Coma, A Revelation: How a Quadriplegic Man Helped Pioneer His Own Life-Changing Robot

After a paralyzing stroke, Henry Evans went from feeling suicidal to full of optimism with help from his caregiver wife, Jane, and from power of technology to help him live a better life. 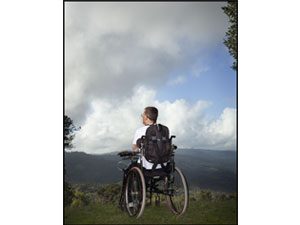 Atop long and winding Page Mill Road in Northern California, where the miles turn over without fanfare, a driveway stretches, removed from Silicon Valley below. At its end, a house, and inside, Henry Evans lies in bed. It’s where he spends between 18 and 24 hours of each day. Occasionally, he is taken to the bathroom or put in a wheelchair. A few times each week, he is placed outside by the garden. Most of the time, though, he is here, head propped up, the rest of his body motionless beneath the covers.

It’s been like this for more than a dozen years. Though Henry can turn his head and has limited use of one finger on his left hand, the rest of his body is paralyzed. And though he can let out a deep laugh and cry, he cannot speak. But Henry can feel everything—every itch he cannot scratch, every pain he cannot ease, and every pressure he cannot relieve.

Then there are his eyes. They smile and roll when he teases. They narrow and focus, connecting the distant world with the bright mind still fully functioning inside his head.

There are a few ways in which Henry speaks. A wink of his left eye is a request to scratch an itch. Blinking twice means “thank you.” Rolling his eyes toward the ceiling means Henry is requesting the letter board, a translucent plastic rectangle with sets of letters in various places: ABC in the top left; DEF in the top middle; GHI in the top right, and so forth. As Henry’s wife, Jane, holds up the board, she follows his eyes and calls out the letters he focuses on, spelling words as he goes. Often, she finishes them for him.

“I, P, O—I posted—A, N—and—T, W—two people …,” Henry begins telling me through Jane one evening, describing a note he posted to a website. With Jane’s help, Henry’s words come fast. Then Jane puts the board down and leans in, and Henry moves his eyes to where the letters would be. Jane, too, has the board memorized and reads as they go, spelling out his sentences.

Henry’s story is as much about Jane as it is about him. “We are one person,” Henry jokes. “We just can’t decide if we are a boy or a girl.”

Jane radiates warmth and positivity. She’s quick to laugh, and Henry says she has greatly prolonged his life. The two grew close in high school and were married in their early 20s. “It was like magic,” Jane says of their first dance. “I felt like I was home.” Although she’s more than a foot shorter than Henry, Jane manages to lift him out of bed and into a wheelchair. She adjusts him to ease pressure and feeds him. Sometimes, when they long for an embrace, she maneuvers his arms to wrap around her, squeezes him, and feels the pressure of him leaning in.

In 2002, Henry’s life was full. He was physically fit and a towering presence. The chief financial officer at a start-up, he and Jane had four young children. Eight months earlier, they had bought their first house, on a beautiful piece of land in Los Altos Hills. Henry, good with his hands, looked forward to renovating it. He was 40, and life was just beginning.

One August morning, Henry was driving his children to school on the way to work when his vision narrowed, and his speech began to slur. He focused on the road and dropped his children off, and then he turned around. Six miles back up the hill, Henry stumbled into the house. He told Jane that he just wanted to lie down. She said they were going to the doctor. Henry had to crawl to get back to the car.

In the emergency room, Henry’s right arm went limp. “I’m so scared,” he told Jane. And then he fell into a coma.

Doctors initially thought Henry might have meningitis. It turned out that a birth defect had precipitated the stroke-like symptoms. He was put on life support, and when he emerged from the coma two weeks later, he was unable to speak or move. Jane noticed he tracked her with his eyes.

“I soon realized they were all I could move,” Henry writes. “My dad explained that I had no motor control, and I got it—I was trapped in my own body.”

At first, Henry was unable to breathe on his own. He had a tracheostomy and a feeding tube, and he was on about 25 medications. Two blinks became “yes,” and one, “no.” He was barely alive, but his mind and his senses were perfectly intact.

Four months later, Jane and Henry returned home. Though Henry had developed use of a finger and better control of his neck, he had a hard time thinking about living. For the next three years, Henry talked to Jane about helping him with suicide.

“There is a reason God left you with your mind, and you have life,” Jane told him. “Those are two incredible gifts that we take for granted every day. The hardest thing you have to do is figure out why you’re left here on Earth. You have a purpose.”

A few years later, a television show helped change Henry’s outlook on life. One day, while watching CNN, he saw an interview with Georgia Tech professor Charlie Kemp. Kemp was discussing his collaboration with Willow Garage, a now defunct robotics research lab in Menlo Park, California, and its robot, the PR2. Henry immediately recognized the potential of robots to level the playing field for severely disabled individuals.

Like Henry, many people are dependent on caregivers for their “activities of daily living,” as they are called: eating, showering, moving around, shaving, even scratching an itch. But robots have the potential to help by serving as extensions or surrogates for body parts.

Living with quadriplegia had given Henry a grasp of what ideas would be beneficial in practice. Using a head tracker that converts tiny head movements into cursor movements, Henry fired off e-mails to Steve Cousins, then president and CEO of Willow Garage, and to Kemp. Longer e-mail discussions and, eventually, a collaboration ensued between Henry and Jane, Willow Garage, and the Healthcare Robotics Lab at Georgia Tech that led to the use of robots that function as body parts for the severely disabled. Henry called it Robots for Humanity, describing his work on the company’s website as “using technology to extend our capabilities, fill in our weaknesses, and let people perform at their best.”

One of the first things Kemp and Cousins did with Henry and Jane was ask them to identify tasks that would be the most helpful for a robot to perform. Scratching and shaving ranked high on their list. First, Kemp and Cousins designed a program that allowed Henry to use his head tracker and a computer to manipulate the PR2 to scratch an itch on his face. It was the first time he had been able to do so in ten years. Shaving, they felt, would take a little more practice.

Thanks to software developed primarily by Kemp, Henry could operate the robot remotely on his own computer. When it came time to test the technology for shaving, Kemp agreed to be the guinea pig in a practice run. One day in his lab at Georgia Tech, Kemp sat very still as a robot controlled by Henry in California moved closer to Kemp’s stubble-covered face. The robot held an electric razor. Tight in the professor’s hand, a small control with a red kill-switch button. The trial was a success. Later that day, a clean-shaven Kemp sent out an e-mail to their collaborators.

“I suspect that a mobile manipulator controlled from across the country by a person with quadriplegia to help someone shave is a first for robotics,” Kemp wrote.

The implication of the trial was significant. It provided further evidence that people with motor impairments could operate robots to perform physical labor from remote sites, perhaps for compensation. Kemp envisioned people with impairments also helping one another remotely.

Not long after his practice run with Kemp, Henry shaved his own face.

On November 20, 2013, nearly 3,000 miles away from Henry’s Los Altos Hills home, a capacity crowd fills Sidney Harman Hall in Washington, DC, and applauds as Henry is introduced to talk about this new technology. A robot rolls onto the stage. A monitor on top shows Henry, back in California. The audience grows quiet.

A speaking device reads what Henry types, and he controls a robot from the other side of the country with his head tracker. Henry “speaks”—both on stage and at home beside Jane—and demonstrates how he can fly a drone remotely, in front of his listeners.

“From a distance, all humans are disabled,” Henry tells his audience. “As humans, we adapted to our environment through evolution. We developed sight and hearing and speech. Yet these adaptations are quite limited. We can’t run faster than about 25 miles per hour. We can’t fly. We can’t stay underwater forever. All humans are limited by nature in many ways.

“I may have lost a few of the natural adaptations that evolution afforded me, but I have adapted, often in a way similar to how you have adapted to nature’s limitations.”

The next time you see a disabled person, Henry tells the crowd, remind yourself that you use assistive devices at least as often as he or she does. But that doesn’t diminish you. “Your disability doesn’t make you any less of a person, and neither does mine,” he says. He gets a standing ovation.

The Traditional Wedding Anniversary Gifts By Year
What Is “Doomscrolling”—and How Can You Stop the Cycle?
A Psychologist Explains Why We React So Strongly to Celebrity Deaths