Print a map of this route

For anyone who has ever dreamed of soaring like an eagle from one mountaintop to the next, Trail Ridge Road is a fantasy fulfilled. Travelers along this heavenly highway ascend, curve by sinuous curve, to elevations that are literally breathtaking. From ethereal overlooks in Rocky Mountain National Park, the drive winds south through forested valleys, along the shores of azure lakes, and across raging rivers, ending at a charmingly preserved Victorian-era mining town.

1. Park Headquarters
A quiet prelude to the stunning vistas to come, Rte. 36 winds lazily westward from the gateway town of Estes Park to the high ramparts of Rocky Mountain National Park. After pausing at park headquarters for a brief orientation, visitors enter a domain where more than 60 peaks soar higher than 12,000 feet into the alpine world above the tree line.

Within the park are 147 lakes and over 350 miles of trails ranging from easy strolls along glacier-fed streams to strenuous hikes that crest the Continental Divide. Perhaps the best time to visit is in September, when the summer throngs have thinned, elk come down from the high country to feed in lush meadows, and the leaves of quaking aspen shimmer like gold coins.

2. Deer Ridge Junction
As Rte. 36 climbs the flank of Deer Mountain, the view to the rear embraces a line of lofty summits crowded shoulder to shoulder. The champion is Longs Peak, towering above its neighbors at 14,259 feet.

At Deer Ridge Junction the drive joins Rte. 34 — the start of legendary Trail Ridge Road. Bisecting the national park, the 48-mile route rises to more than 12,000 feet, meandering for 11 miles across stark tundra that looks as though a part of Alaska had been transplanted to Colorado.

3. Many Parks Curve
In the language of Colorado pioneers, a “park” was a mountain-ringed meadow — an invitingly flat place to homestead in this otherwise rugged region. Upper Beaver Meadows and Moraine Park sprawls below the observation point at Many Parks Curve; visible in the distance is Estes Park, where the drive began.

As it winds through forests of Engelmann spruce and subalpine fir, the road passes a sign marking an elevation of two miles above sea level. A bit farther is Rainbow Curve, where another of the park’s panoramas embraces a seemingly infinite expanse of mountains and valleys. The long scar on the hillside below is a reminder of the fearful flood that occurred on July 15, 1982, when the Lawn Lake Dam broke, sending a wall of water down Roaring River into Horseshoe Park and scattering giant boulders as though they were mere dice.

4. Forest Canyon Overlook
Beyond Rainbow Curve, the drive skirts stunted pines that have been contorted into odd shapes by the relentless wind. Scattered among them are “banner trees,” whose limbs grow like flags on the leeward side of their trunks. As the road continues to ascend, even the trees disappear, yielding to tundra: a world of grasses and wildflowers only inches high. Although the growing season is brief (just 6 to 12 weeks in midsummer), it manages to produce a glittering display of blooms — sky pilot, clover, moss campion, phlox — in an otherwise bleak alpine landscape.

From the overlook high above Forest Canyon, the distinctive U shape of this glacial valley is quite evident, once filled hundreds of feet deep with moving ice. Echoing the glacial era are the Gorge Lakes; cupped in ice-sculpted bowls called cirques on the canyon’s far wall, they remain frozen until well into summer.

5. Tundra Nature Trail
For a close-up look at tundra vegetation, stop at Rock Cut Overlook and walk the half-mile Tundra Nature Trail. Here bucktoothed marmots sun themselves on rocks or scamper across the ground. Less at home are human visitors, who often gasp at the slightest exertion in the thin air at 12,000 feet. But inhospitable as this setting may seem in the warmer months, the scene in winter is truly forbidding: the wind can top 200 miles an hour, the temperature plunges to -60° Fahrenheit, and snowdrifts can reach as much as 30 feet deep.

6. Lava Cliffs
The “lava” here is really volcanic ash deposited 26 million years ago and compacted under heat and pressure into the rock called tuff. Glaciers, the architects of the Rockies, later stripped away overlying material to expose this remnant of the area’s volcanic past.

Within the next mile the road arrives at its highest point: 12,183 feet above sea level. Far to the west rise mountains that inspired one of the park’s most poetic names; because snowfields on their upper slopes remain visible all year, the white-patched peaks are called the Never Summer Mountains.

7. Alpine Visitor Center
Barren though it may seem, tundra harbors a fascinating array of life, from seldom-seen pocket gophers that tunnel just below the ground to perky little rosy finches that pluck frozen insects off glacial ice. Exhibits at the Alpine visitor center highlight these and other forms of wildlife in this treeless world, comprising nearly a third of the park.

8. Milner Pass
Back below the tree line, a one-mile trail leaves the road and heads uphill to the Crater, one of the park’s best spots for sighting bighorn sheep. Males use their big curved horns to battle for dominance; when two rams butt heads, the crack echoes through the mountains like a rifle shot.

Just after passing Poudre Lake, whose waters eventually drain into the Mississippi River, the drive crosses the Continental Divide at Milner Pass. Beyond this point raindrops from a summer shower join the Colorado River and pass through the Grand Canyon before flowing into the Gulf of California.

9. Farview Curve
The overlook at Farview Curve perches above the Kawuneeche Valley, carved by a glacier that extended for 20 miles along what is now the west side of the park. Just below, Trail Ridge Road begins a dizzying series of switchbacks as it descends to the flat, marshy valley floor, where the Colorado River meanders aimlessly in braided channels. Kawuneeche is Arapaho for “valley of the coyote”; the wild canines are common here, as elsewhere in the park. Meanwhile, watch the meadows for the stately profiles of moose as they forage for plants.

10. Grand Lake
Rte. 34 leaves the national park — and Trail Ridge Road ends — just beyond the Kawuneeche visitor center. Grand Lake, less than a mile to the east, is Colorado’s largest natural lake. (It is, however, much smaller than its man-made neighbors, Shadow Mountain and Granby lakes.)

The town of Grand Lake was one of Colorado’s first mountain resorts; founded for the well-to-do after the turn of the century, its yacht club is among the highest in the world. Each August, sailors compete for the Lipton Cup, originally awarded in 1912 by Thomas Lipton, the famed tea magnate, who had a vacation home here. Grand Lake’s rustic architecture, featuring logs of lodgepole pine, is a reminder of that genteel era.

11. Tabernash
After skirting Shadow Mountain Lake, Rte. 34 passes between Lake Granby to the east and flat-topped Table Mountain to the west, where Indians mined jasper for tools and arrowheads. The drive then turns south on Rte. 40, passing through Granby and along the Fraser River valley into ranching country. Near the small community of Tabernash are some remarkable views of the peaks of the Continental Divide, less than 10 miles to the east. The solitary rock column called Devils Thumb rises from the crest of the ridgeline, marking the route of a hiking trail over the mountains.

12. Winter Park
The region around Winter Park, where mountains squeeze in tight beside the Fraser River and Rte. 40, has seen major changes since pioneers arrived here in the late 1800s. Ranching and timber were the first lures. Later on, railroad workers moved in to build the famed Moffat Tunnel, which runs for more than six miles under the Continental Divide. (Completed in 1927, it is one of the longest railroad tunnels in the world. Rail fans and other curious travelers can see its western portal from an overlook in Winter Park.)

Now, as the interweaving trails on the mountainside to the west attest, Winter Park is one of Colorado’s more popular ski resorts. Today’s luxurious lodges and high-tech lifts could hardly have been envisioned when Denver inaugurated the ski area. On that day in January 1940, lift tickets cost the grand sum of $1 each.

13. Berthoud Pass
Taking a serpentine course up the steep mountain slopes, Rte. 40 once again crosses the Continental Divide (back to the Atlantic side) at 11,307-foot Berthoud Pass. Renowned mountain man Jim Bridger was a member of the survey party that charted this route over the highlands in 1861. Pause a moment here to relax and savor the celestial view, for another series of white-knuckled roller-coaster curves awaits you on the way down to I-70.

14. Georgetown
No time capsule could have preserved the historic mining village of Georgetown as well as did a single turn of economic fate: silver, which built the town in the 1870s, plunged in value when America adopted the gold standard in 1893. The boomtown went bust, and its fine Queen Anne, Gothic Revival, and Italianate buildings were saved from the wrecking ball of modernization. More than 200 of Georgetown’s original structures remain intact today, many beautifully and authentically restored. The Hamill House, built by the town’s richest silver miner and now a museum, dazzles the eye with ornate walnut woodwork, gleaming gaslights, original wall coverings, and Renaissance Revival furnishings.

A ride on the nearby Georgetown Loop Railroad affords breathtaking views down the narrow, rugged valley-especially from Devils Gate Bridge, perched on stilts 100 feet above Clear Creek. The chugging steam locomotive and open-air excursion cars recall the days when miners sought and made their fortunes here. Nestled against the wooded mountainside in the distance sits Georgetown, where the legacy of another era lives on in the city still known as the Silver Queen of the Rockies. Length: About 110 miles.

When to go: Trail Ridge Road is open May to October, weather permitting; other roads are open year-round.

Fuel and lodging: No fuel or indoor overnight accommodations are available in the park.

Words to the wise: Beware of lightning along Trail Ridge Road. 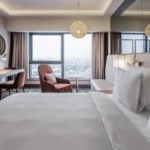 Which Hotels Have Handled COVID-19 the Best? 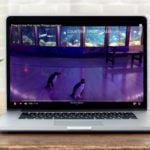 The Most Popular Virtual Tour in Each U.S. State 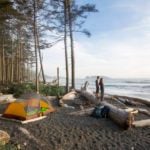 The Most Scenic Campsite in Every State