Each of us has our own way of celebrating July 4. Retired Marine Jamie Summerlin will pay homage to our Each of us has our own way of celebrating July 4. Retired Marine Jamie Summerlin will pay homage to our country resting up for the final leg of his 100-day jog across America. Since setting off from Coos Bay, Oregon, Summerlin has run over 3,300 miles to raise money and awareness for a number of veteran organizations close to his heart.

Summerlin fell in love with running while in training for his first marathon in 2009. He was inspired to make a cross-country run for vets because “I wanted to do something for my military brothers and sisters who needed a lot more exposure and awareness than they were getting,” he said.

City by city, Summerlin’s old Marine pals have picked up the race in support of his mission to help support the Wounded Warriors Project for disabled vets as well as two other vet groups in his home state of West Virginia. So far he has raised $40,000. Although the trip has been trying—Summerlin has run in some extreme weather conditions and with a shin injury—it has been an honor, he said.

On the 100th day of his run, Summerlin will celebrate the holiday in Annapolis, Maryland with his family and friends. But it does not end there. On July 5th, he will hit the road for another 100 miles, to officially finish in Delaware’s Rehobeth Beach. 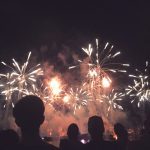 “The Fireworks Mistake I Will Always Regret”