Meat Lovers: Which of Your Favorite Cuts Is Safest?

From chicken nuggets to fine steak, how different types of meat affect your risk of foodborne illness. 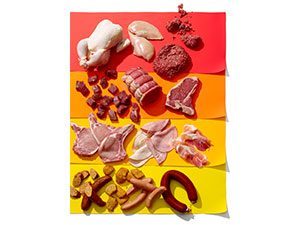 Sausage, hot dogs, and chicken nuggets are good bets for avoiding bacteria, according to a 2013 report from the Center for Science in the Public Interest that analyzed 12 years of foodborne-illness outbreak data. “The processing—whether it’s cooking or chemicals—kills pathogens,” explains Caroline Smith DeWaal, director of food safety at the CSPI. “We’re not saying they are great for you, but they are low risk when it comes to acute foodborne pathogens.” For example, outbreaks from chicken nuggets were rare—only 200 illnesses were documented over the 12-year period.


Despite its reputation as a petri dish, pork is actually relatively safe. One reason: We now cook the heck out of it. Another is that until around World War II, domestic pigs were fed garbage containing animal feces, which are full of the parasite Trichinella, source of the serious disease trichinosis. Laws passed in the 1950s and ’60s ended that, and the incidence of trichinosis dropped dramatically.

Cold cuts are less dangerous than you think. The CSPI report classifies cold cuts as medium risk. Even though deli meats are at high risk for the pathogen Listeria monocytogenes, which causes listeria (a very dangerous foodborne illness), most of us can eat contaminated cold cuts without getting sick. But senior citizens and immunocompromised people who contract listeria face a hospitalization rate of 90 percent. In women who are pregnant, the bacteria can cause miscarriage or stillbirth.

In theory, steak should be safe (the cooking process kills bacteria on the surface, while the inside of the meat is essentially sterile). However, according to the U.S. Food Safety and Inspection Service, about 10.5 percent of steaks undergo a process called mechanical or needle tenderization, in which metal blades or pins puncture the meat before packaging. While this technique improves the meat’s texture, it also moves bacteria from the surface to the center. Steaks that have undergone this process are not labeled, and cooking them only to rare or medium rare may not kill the dangerous pathogens inside.


Contaminated chicken sickens more people than any other affected meat, partially because we eat so much of it but also because of the way it’s prepared, says Smith DeWaal. Commercial chicken plants typically dip meat in several baths before packaging, giving bacteria opportunity to spread. It’s also hard to cook away bacteria in chicken. “Chicken has creases and folds in the skin,” she says. “Pathogens can hide in those folds.”

Pathogens on the surface of beef are spread throughout when it is ground. And if that ground meat isn’t properly cooked—say, in the center of a rare burger—germs get a free ride into your digestive tract.

Be a Healthier Carnivore

Be picky at the market: If packages of meat have excessive liquid, they may have been stored at an improper temperature or for too long. The container should be relatively dry.

Stop washing meat: The rules have changed. Whereas home cooks commonly wash meat before cooking to splash away pathogens, the USDA now says this process doesn’t kill any bacteria. Instead, it spreads germs all over your hands, sink, and kitchen.

Clean hands and surfaces often: Harmful bacteria can get onto cutting boards and countertops. Sanitize all surfaces with hot, soapy water, and frequently wash kitchen cloths.

Avoid pink meat: A rule of thumb is you’re never in the clear to eat rare or medium-rare beef, pork, veal, or lamb that is ground. The internal temperature should reach 160° F, about medium done.