These Butter Cookies from the Philippines Supposedly Have Healing Powers

Cookies for the sake of health? Count us in! 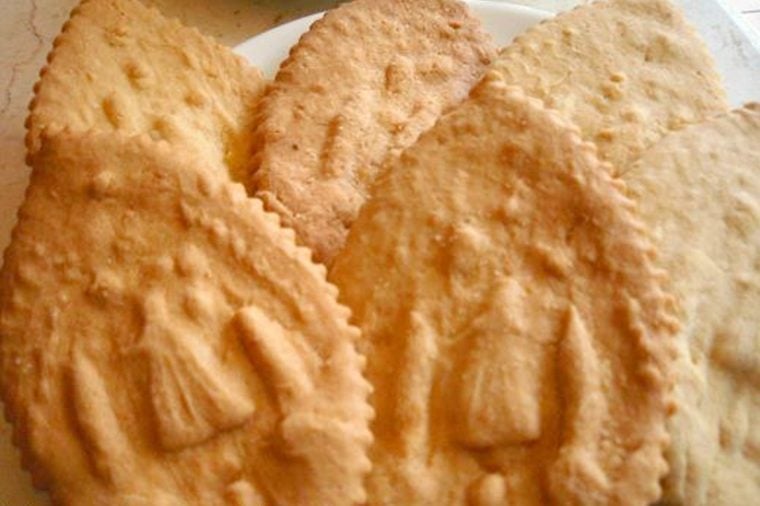 Next time you feel a cold coming on, you might want to skip the vitamin C supplements (and these 7 foods that make colds worse) and satisfy your sweet tooth instead. Legend has it one type of Filipino cookie has healing powers.

Panecillos de San Nicolas (or Pan de San Nicolas) are a buttery shortbread-like cookie made with arrowroot flour, coconut milk, and egg yolks. But what really sets them apart is their shape. The dough is stuffed in ornate wooden molds before baking, which leaves an intricate design of a saint on the pastry. Different towns across the Philippines have their own mold shapes, so you can tell where your Pan de San Nicolas came from just by the design. Some of the molds used today are hundreds of years old.

The cookies are a celebration of St. Nicholas of Tolentino, an Italian born in 1245. According to legend, Nicholas fell very ill and was only getting worse. When all hope seemed lost, he had a vision of the Virgin Mary telling him to eat a small piece of bread dipped in water. (Maybe these 7 health benefits of bread helped.) He followed her instructions and miraculously got better. From then on, he started healing the sick by praying to Mary and feeding bread to those in need.

Spanish friars brought a recipe for Pan de San Nicolas in the 1600s, chef and food historian Lillian Borromeo tells Cooked. The egg yolk-heavy recipe was a perfect use for otherwise wasted food. At the time, newly built churches would use egg whites and shells in their cement, leaving an abundance of yolks. It’s no surprise, then, that the cookies caught on. (Find out what the color of a yolk says about an egg.)

The cookies are said to have healing powers, but not just because of the cookies’ link to the saint who healed with bread. Supposedly when kept in a jar, Pan de San Nicolas would start to grow mold similar to penicillin. Just like we use that fungus in medicine today, the cookies were said to help the sick fight an illness. When someone did fall ill, the sick person would eat a cookie while a special prayer was recited, according to The Daily Meal. (Don’t miss these other 14 ways to stop from getting sick.)

Families would only bake the pastries on special occasions, though, like Saint Nicholas day on September 10. “Old families believed this reinforced the biscuits’ healing power,” Borromeo tells Gulf News. “Kept in cookie jars, the rare baked products were never sold.” Apparently, some farmers would even sprinkle the crushed cookies in rice fields for good luck. (Steal these other tried-and-true habits of lucky people.)

We can’t promise a cookie will cure you, but we can recommend these 10 best foods to eat when you’re sick.