Laced with sarcasm, a gag can blow up in your face. Rimmed with wit, it might defuse a tense moment. Here are some common scenarios. You’re welcome.

Scenario 1: Your husband plants himself on the couch all weekend

Witty joke that heals: This gag tells him you’re chill with his chilling: “In heaven, Mother Teresa is dining with God, who has made a couple of tuna fish sandwiches. While they’re eating, she looks down into hell and sees the denizens eating steak, lobster, and crème brûlée. ‘Not that I’m complaining,’ she says, ‘but why are they eating lavishly, and we’re having tuna sandwiches?’ ‘Well,’ says God, ‘with just the two of us up here, I figure, why cook?’ ”

Scenario 2: Your cheap friend is driving you nuts

Sarcastic joke that harms: Steal this line from Caroline Rhea, who recalls a thrifty date: “Instead of buying me a drink, this guy offered me a sip of his.”

Witty joke that heals: Accentuate the positive like Al Clethen did: “People always say, ‘He died penniless,’ as if it’s a terrible thing. Sounds like good timing to me.”

Scenario 3: At a party, someone pulls out his kid’s pictures

Sarcastic joke that harms: Toss a family-unfriendly riposte from Betsy Salkind: “I’ve always wanted to give birth. To kittens. I figure it would hurt less, and when you’re done, you’d have kittens!”

Witty joke that heals: Poke fun at yourself for being broodless, and say you’re just not parental material, as Lizz Winstead did on the comedy Dr. Katz, Professional Therapist: “I have a recurring dream that I’m gonna have a kid and leave it on top of the car.”

Scenario 4: A friend leaves the salon a newly minted blonde

Sarcastic joke that harms: Quip to the flaxen-haired beauty: “Did you hear about the pregnant blonde? She got a maternity test to make sure it was hers.”

Witty joke that heals: Instead, level the playing field: “Why are blonde jokes short? So brunettes can remember them.”

Scenario 5: Your wife is mad at you

Sarcastic joke that harms: Fling this Bill Maher joke back at her: “Women cannot complain about men anymore until they start getting better taste in them.”

Witty joke that heals: This Wanda Sykes riff lets her know you get it—you’re a pain: “They say marriage is a contract. No, it’s not. Contracts come with warranties. When something goes wrong, you can take it back to the manufacturer. If your husband starts acting up, you can’t take him back to his mama’s house. ‘I don’t know, he just stopped working. He’s just lying around making a funny noise.’”

Scenario 6: Uh-oh, someone wants to discuss the Middle East


Sarcastic joke that harms: Jay Leno pours gas on the flames: “An Israeli man’s life was saved when he was given a Palestinian man’s heart in a heart-transplant operation. The guy is doing fine, but the bad news is he can’t stop throwing rocks at himself.”

Witty joke that heals: On the other hand, Leno suggests finding a common enemy: “Madonna is looking to buy a home in Israel, and today the PLO told Israel, ‘OK, you can have the land back.’” 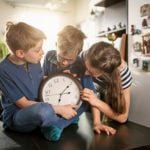