My Grandfather Left the Structure of His Old House to Rot in a Field. Here’s Why I’ll Never Tear it Down.

The old farmhouse was abandoned and falling apart. But tearing it down would be like razing the author’s past.

In 1963, at age 65, my grandfather, Erwin, decided to tackle a crazy project: He wanted to build a new house. He wasn’t quite sure what to do with the old house. It seemed a waste to demolish it, but something had to give, since it sat where the new house would be. In a moment of inspired frugality, he hired a bulldozer to push the old house far out into a grove of trees. That old house sits there to this very day.

Erwin and his wife, Elida, passed away, and I purchased the farm from their estate. My wife and I raised our sons on this place and have lived here for more than 30 years.
When we first moved in, my wife took one look at the derelict house and declared it a hazard. I agreed and planned on a colossal bonfire. But I deemed it prudent to check out the old shack first, just in case something of value had been left behind.

Our two young sons tagged along, and we waded through the tall grass in the meadow where the old house sat. Time had taken its toll. The front porch had collapsed in on itself, most of the windows were gone, and the siding was falling off. We entered through an open window and got the olfactory impression that skunks had resided beneath the floorboards.

I felt as though I had stumbled onto a time capsule. Here lay the sundry detritus of my grandparents’ lives. A broken chair. Some old clothes in a gunnysack. A thermometer from a grain elevator. But the thing that drew my eye was a cardboard box stuffed with papers. I dug through its contents and was instantly transported back in time. There was a tax return from 1957. Canceled checks from June 1962. Greeting cards from old friends and relatives, now all dead and gone. An uncle’s third-grade spelling book.

I spent most of a pleasant hour going through that box. All the while, I had to answer a stream of questions from my sons about the old house. They were amazed that nine people once occupied the tiny structure, and that they did so without running water or electricity. I related how on cold winter mornings, a pail of water would be iced over even though it sat right next to the cookstove. And they shivered when I told them that in those days the cookstove was their only source of heat.

So it was that the old house was spared the torch.

The years passed, and our visits grew infrequent. The house once again enjoyed the lonely solitude of our meadow. As we hurried through our lives, I might catch a glimpse of it through the trees and wonder: How did they manage? How did they survive the dust storms and the floods and the blizzards and the Great Depression? They must have been made of sterner stuff than I was. I remembered how, as a child, I would struggle to walk in my father’s footprints. Even then, I could imagine no nobler calling than farming, just like Dad.

Then, one April morning, my father was felled by a massive heart attack, at age 68. The entire family was shocked by his passing, none more than me.

Why I ventured out to that old house on a day shortly after my father’s funeral is still beyond me. It was as though it were calling; even the trees seemed to whisper an invitation to come, to visit, to tarry awhile.

As I stood once again on that ancient linoleum, my eye was drawn to a jumble of papers on the floor. An envelope, yellowed with age, lay on top. A blue stamp on the envelope read “Passed by Naval Censor.” How could I have missed this artifact? My father had served aboard the USS Washington during World War II and had written home whenever he could. My grandmother saved all of his letters.

I removed one letter carefully from its envelope. It was dated September 1944. My father would have been somewhere in the South Pacific at that time and all of 18 years old. I studied the familiar scrawl. Dad wondered how the oat harvest had been and how his uncle’s new team of horses was working out. He supposed that his youngest brother was starting first grade and imagined that he was becoming quite the little man. He asked his mother to greet everyone and said that he missed them all.

It wasn’t hard to read between the lines. Here was a homesick young man, a kid really, who had spent his entire life dwelling upon a sea of prairie grass. Now he was on a different kind of sea, an ocean that was being roiled by the thunder and the lightning of a world at war. At the bottom of the page, in underlined print, my father had passed on one last message. Tears burned my eyes as I read those words he had so carefully emphasized: “All is well here. Please don’t worry. I am doing fine.”

As I left the old house that day, I took one last glance back at it over my shoulder. I don’t care what anyone thinks, I decided. That old house gets to stay there until it rots into the earth. 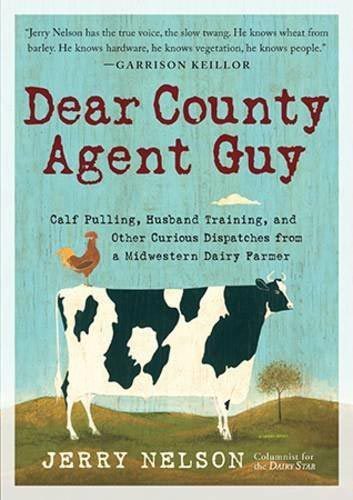 From the book Dear County Agent guy by Jerry  Nelson, Copyright © 2016 by Jerry Nelson.  Reprinted with permission by Workman Publishing. All rights reserved.