Jenny AllenUpdated: Jan. 09, 2018
From the book Would Everybody Please Stop?

Coming to appreciate that nothing in life is permanent, except maybe that ink stain.

I was flying on an airplane the other day when my new pen splattered black ink all over the front of my new dress. The pen was my favorite kind of pen—or was, until then: a Bic Z4 Roller. The real ink was what had made me love Z4 Rollers. It was thinner than what comes out of, say, a regular Bic pen, which meant you barely had to touch the paper to get the pen to move across it. Z4s are like fountain pens, only without the messy qualities of a fountain pen. I loved them deeply. 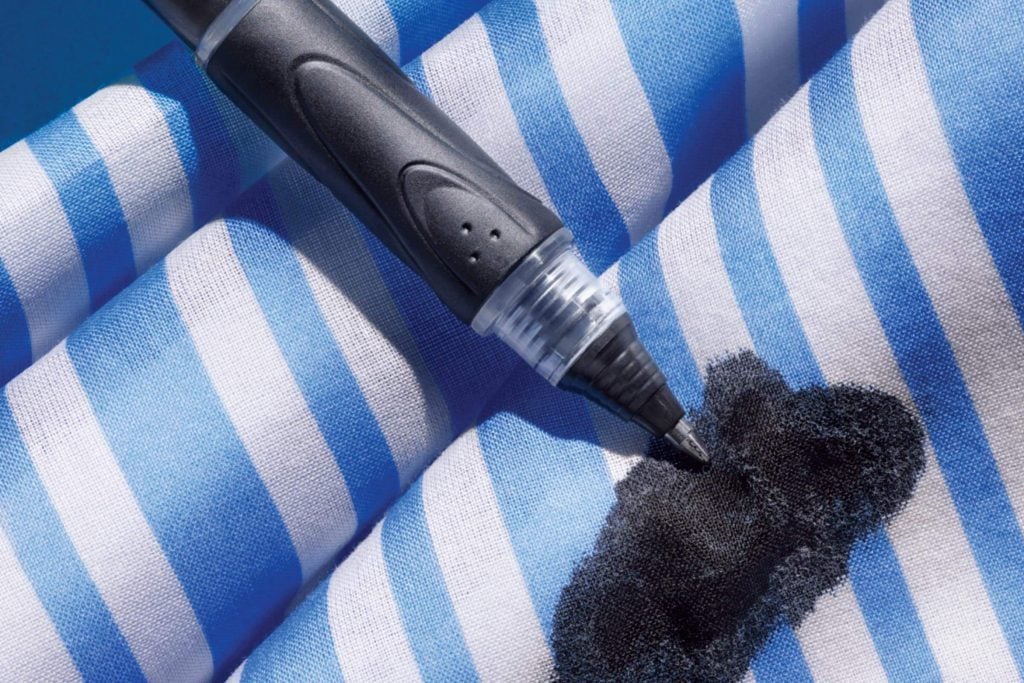 I loved my new dress even more, though. It was from Banana Republic, and I had paid full price for it, which I never do. But the dress was worth it. It was casual and a little dressy at the same time: sleeveless, with a scoop neckline, a tailored waist, and a slightly puffy skirt. It had flattering, thin, vertical blue and white stripes, and the fabric was a blend of cotton and something human-made that nevertheless felt soft and not fake and yet required no maintenance—no dry cleaning, no ironing. The dress practically sprang itself out of the dryer and stood up on its own, wrinkle-free and ready to go. Also, it had my favorite feature in a dress, which is pockets. They were hidden pockets, sewn into the seam, which I like even more.

Tatiana Ayazo/Rd.com
After the explosion on the plane, I attacked the big wet splotches of ink with water and a napkin; if anything, this seemed to set the stains. As soon as we landed, I ran to an airport store and bought one of those little travel packets of disposable cloths soaked in stain remover and tried scrubbing the splotches again. I knew this would be futile, and it was. I went to my hotel, changed my clothes, and put the ruined dress into my suitcase. I couldn’t bear to throw it away; maybe someone would invent a magical ink-stain remover in the next week and I’d have thrown out the dress for nothing.

Sometimes, when something bad happens to me, I play a little game. The object is to ask yourself whether the bad thing that just happened has any silver lining whatsoever. (Here’s how to develop a positive attitude in just six easy steps.) It’s corny but comforting; if you try it, you’ll be surprised. There’s some good thing, even if it’s tiny, even if you have to strain for it, in almost every mis­fortune. I never thought I’d say it, but I can even see the upside of my having had cancer. It took me a long time to feel that way, and I won’t get into it here, but if you don’t die—a big caveat, I know—there is one, I swear. But I have thought and thought about my ­ruined dress and what the upside of it could be, and I just cannot think of one thing.

I put this question to a friend, and she said that the ruined dress was one of those lessons about the impermanence of things, about non-attachment. About how everything changes and how life is about letting go.

I considered this. And then I thought, I already know that. Doesn’t everyone over, say, 40, know it? Haven’t we all lost a lot of things? In fact, not to sound too dreary, but doesn’t it sometimes seem as if life is just one big leave-taking after another—from your children, from Checker cabs, from weather that makes sense, from people we love who move far away or die too young?

Tatiana Ayazo/Rd.com
So much loss! A new dress isn’t a show of attachment to material objects (OK, maybe a little). I knew the dress would start looking shabby one day. But buying a new dress is an act of hope, a show of spirit in the face of an unreliable universe.
At least that’s what my new dress was. It had been a trying year. And now my emblem of hope had these big black splotches all over it.

But you know what? Here’s what I’m attached to: Possibility. Pleasure. (Here are some tricks for being happier without really trying.) They’re less lofty than hope, less credulous, less faith based, but they’re more accessible. I went to the flea market yesterday, and I found a pretty little platter. It’s practically ordering me to roast a chicken, invite a couple of people over, and serve the chicken on it. I think I’ll make peach cobbler for dessert. Someone, probably me, could drop and break the platter during the evening—it’s unlikely but possible, like the ink exploding from my pen—but was that a reason not to buy it?

My dress and I—we were great while we lasted. Never mind. That’s the way some love affairs go.

Jenny Allenhas written for the New Yorker, Esquire, and many other publications. Would Everybody Please Stop? is her latest book.

Originally Published in Reader's Digest
Excerpted from Would Everybody Please Stop? Reflections on Life and Other Bad Ideas by Jenny Allen, published by Sarah Crichton Books, an imprint of Farrar, Straus and Giroux. Copyright © 2017 by Jenny Allen. All rights reserved.