This Is How Scientists Name the New Species They Discover

For years, people have been naming their pets—and their kids, in some cases—after pop icons they love. In 2016, 370 people in the United States named their baby girls Khaleesi in honor of a Game of Thrones character.

Scientists, too, are constantly naming newly discovered species after celebs. But these names might carry a little bit more weight: While a baby named Khaleesi can get older and decide to legally change her name, scientific names go down in the history books. There’s the Agra schwarzeneggeri beetle, named after Arnold Schwarzenegger’s biceps; the Aleiodes shakirae wasp, named after Shakira’s hip and belly dance movements; and the list goes on.

Turns out, there is a method to this seemingly mad nomenclature. Sometimes having a recognizable name attached to what might otherwise be an unremarkable little creature is the only way for the species to get widespread attention. The latest case in point: In September 2017, researchers announced the discovery of 15 new species of spiders in the Caribbean. They named three of them after Leonardo DiCaprio, David Bowie, and Michelle Obama. Here are the 10 most dangerous bugs to watch out for this summer.

Spider expert Ingi Agnarsson is an associate professor of biology at the University of Vermont and was the lead researcher of the Caribbean study, published in Zoological Journal of the Linnean Society. He says scientists who discover a new species can basically call it whatever they want, as long as they use the correct genus name. For example, some scientists name a new species after a loved one or another scientist; it’s frowned upon to name it after themselves. Agnarsson’s team called one spider Spintharus skelly, after a researcher’s cat, Skelly. The only real problem, he said, would be if a scientist was going to receive any sort of potential benefit, such as if a megastore paid a lab to christen a species walmarti. (Even when the names don’t have traditional Latin translations, Latin-ifying names for species is a common practice in science. Generally, just add an i if it’s a masculine name and an ae if it’s feminine.)

Agnarsson, along with four students who participated in the research, named spiders after prominent advocates for animal conservation and action on climate change. 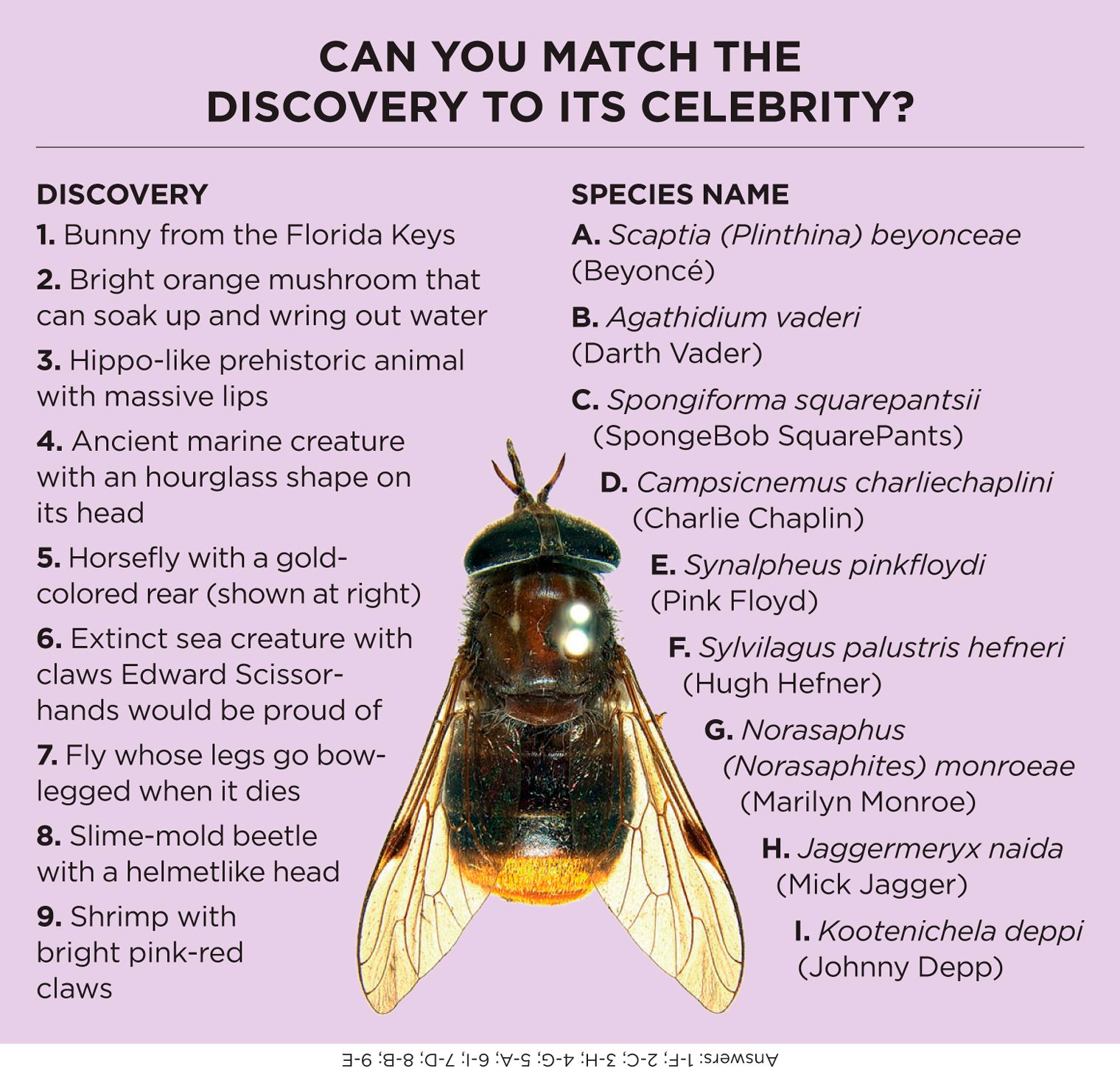 Bryan Lessard/Courtesy CSIROAgnarsson says some species are named this way because scientists have trouble getting the public interested in their studies. Identifying them with a recognizable person is a way to raise awareness and provide an opportunity to learn about the issues surrounding nature and conservation. It also allows scientists to highlight some humanlike traits in these animals and ultimately make them a bit more relatable.

“We’re always trying to find ways of calling attention to major issues in conservation,” Agnarsson says. “This way, the general public will hear about it.” Some real (but obscure) Latin words won’t get many headlines, but the Neopalpa donald­trumpi moth and the Spintharus berniesandersi spider managed to get people talking. Next, find out about these animals with seriously funny names you never knew about.