Why September Is the Most Popular Month for Birthdays

Nine of the ten most common birthdays are in September. Is yours one of them? 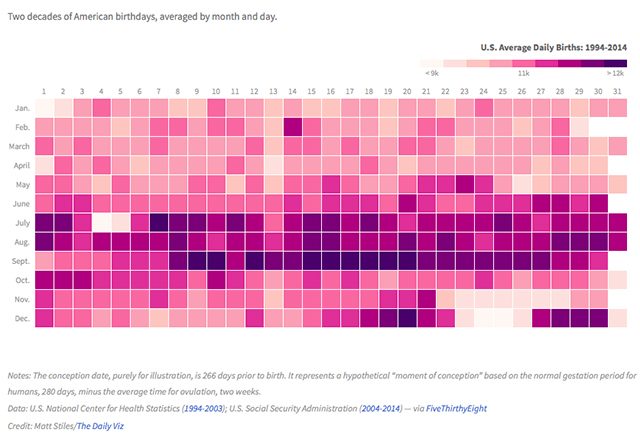 If you feel like you’re running out of clever ways to say “happy birthday” to your Facebook friends this week, it’s not your fault. According to real birth data compiled from 20 years of American births, mid-September is the most birthday-packed time of the year, with September 9th being the most popular day to be born in America, followed closely by September 19th. Fall babies have a lot going for them–people born in October are far more likely to live until 100.

Matt Stiles, a data journalist who loves to visualize the numbers that explain our world on his blog, compiled 20 years of real birth data from the U.S. National Center for Health Statistics and the U.S. Social Security Administration to build this master chart of birthday popularity between 1994 and 2014. As you can see from the chart (above), the week and a half between September 9th and September 20th contains nine of the top ten birthdays in America, with the top three being 9/9, 9/19, and 9/12, respectively.

The least common days to be born are, incidentally, all holidays: 12/25 rounds out the bottom, right after 1/1, 12/24, and 7/4. Strangely, in the 20 years analyzed above, there were even fewer births on each of these holidays than there were on February 29th, which only appeared on calendars six times between ’94 and ’14. September babies are also more successful, according to science.

So why is September such a popular time to come kicking and screaming into the world, while holidays are so uncommon? Here are a few theories to chew on with your leftover cake:

1. Winter is for lovers. Turn the great clock back 40 weeks from September 19 and you’ll find yourself in the December holiday season. As Stiles writes on his blog, “Following a customary gestation period, many of these babies [born on September 9th and 19th] would, in theory, have been conceived on Dec. 17 and 27, respectively.” This makes sense: Many American students and laborers take time off around Christmas, meaning couples have more time for vacation, relaxation, and, yes—baby-making. There is even some data to back this up: Statistically, more couples have sex on vacation.

To that end, Christmas and New Years are thought to be the least popular birthdays because would-be parents know that many doctors try to take holiday vacations of their own. As Mental Floss UK points out, “In the U.S., 10 percent of births were induced before 1990, and that figure almost doubled in the decade after.” As you can see from the data, the birthing lull on Christmas is followed by a spike right after. The conclusion we can draw is that more parents seem inclined to induce birth just before or after the winter holidays, not during them.

2. Our bodies crave winter cuddles. Beyond simply having more time to couple, our bodies may be biologically disposed to winter conceptions. In 2001, researchers at the University of Texas School of Medicine summarized the science community’s various theories: “Biologic hypotheses include deterioration of sperm quality during summer, seasonal differences in anterior pituitary-ovarian function caused by changes in the daylight length, and variation in quality of the ovum or endometrial receptivity. Increased sexual activity associated with end-of-year holiday festivities has also been postulated as a possible behavioral explanation for the December peak in conceptions. The exact reasons remain unknown.”

The reason you may be seeing so many birthdays pop up in on Facebook this week could be, in part, because you just have too many friends. A statistical quirk called “the birthday paradox” shows that in a group of just 20 people, there is a 50 percent chance two of them will share a birthday; in a group of 70 people, there is a 99.9 percent chance that two share a birthday. Compare those numbers to your robust friend circle online, and you are statistically guaranteed some “happy birthday” message overlap. Now, learn about what the most intelligent zodiac sign is, according to astrologists.

If You Were Born In Summer, This Is What We Know About You

What Your Birthdate Reveals About Your Personality

How to Remove Blood Stains from Carpet

Why September Babies Are More Successful, According to Science
Why Do We Eat Birthday Cake?