Should You Share Your Next Doctor Visit With a Friend?

It may seem odd, but a joint doctor appointment can be extremely beneficial, and just might save your life. 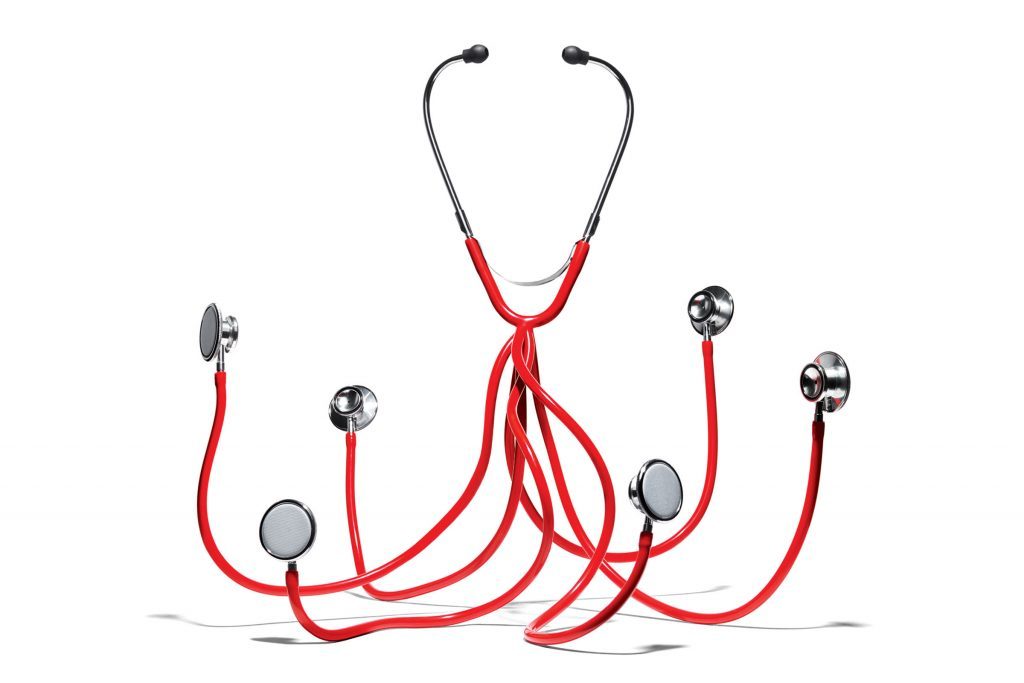 It was like a bad sitcom: Everything Leo said … his wife, Francine, said the opposite. He went to the gym, he told me; not since Bush was president, she countered. They’d been going on like this since they entered the exam room. Today was my first time seeing them—and one of my first times seeing two patients at once, a growing trend in medicine.

As I was wrapping up, Francine stopped me: “Can we talk about his vision?” Leo’s eyesight was getting worse, particularly at night. He denied it—but when I probed further, he admitted that his vision wasn’t what it used to be. Several times, Francine added, he’d been in near accidents while driving at night.

The three of us worked out a plan where Leo could drive during the day for short distances and Francine would drive him at night. While Leo had some objections, Francine promised that he would follow it.

After both of them left that day, I couldn’t help thinking that Francine may have saved her husband’s life.

The American Academy of Family Physicians estimates that around 10 percent of family doctors now give patients the option to share their appointments with people who have similar health issues. For doctors, the benefits are obvious: Shared visits are efficient, allowing us to see more patients in a day. And they can help patients adopt healthy behaviors in a way that one-on-one visits don’t.

A person’s smoking, diet, and exercise habits can depend in large part on the behavior of his or her friends, family, or coworkers. In a landmark study in the New England Journal of Medicine in 2008, Yale sociologist Nicholas Christakis found that when a spouse, friend, or sibling quit smoking, a person’s chances of smoking decreased 67 percent, 36 percent, and 25 percent, respectively. Other research has found similar positive social-network effects for things like medication adherence. (Picking up a prescription? This is why pharmacies are always at the back of the store.)

Much of health, in other words, is shared. For some conditions, like a cold or a sprained ankle, medical advice is simple; social support won’t make much of a difference. But managing conditions like diabetes and high blood pressure can be overwhelming, and stress makes patients less likely to carry out doctors’ instructions. Being around others may help. Group doctor visits may improve the ability of patients with heart failure or diabetes to retain medical information by 10 to 30 percent, research has shown. A study presented at the 2014 American College of Cardiology annual meeting found that being married dramatically lowered one’s chance of heart disease, possibly because a spouse helped reinforce medication adherence and exercise habits.

Despite these outcomes, it’s easy to see why shared medical appointments aren’t more popular. They go against two principles that have defined medicine: the patient-doctor relationship and confidentiality.

Sometimes, though, that relationship isn’t enough.

One of my patients has been seeing me for months in an effort to quit smoking. Her previous doctor prescribed nicotine patches, gum, pills; nothing worked. The reason: Her brother had moved in, and smoking was the one thing they did together. Unless she could get her brother to stop, she told me, it would be impossible for her to quit. I told her to bring her brother to her next visit—and I hope to persuade them to find a new shared activity. As Leo and Francine have taught me, having someone else in the room can make all the difference.

Ravi Parikh, MD
Ravi Parikh, MD, is a resident at Brigham and Women's Hospital and a former editor at medgadget.com. Follow him on Twitter: @ravi_b_parikh.