Sitting Is Killing You: What One Office Decided to Do About It

James A. Levine, MD, PhDUpdated: Apr. 16, 2016
From the book Get Up: Why Your Chair Is Killing You and What You Can Do About It

Sitting for long stretches can make you sick, fat, and likely to die early. Here’s how one forward-thinking office decided to go chair-free and fight ‘sitting disease’ for good. 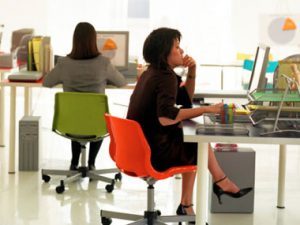 Have you heard about chair addiction? It’s the constant need we’ve developed to sit. We slouch from bed to car seat, to work seat, to sofa. But the goal of sitting is to give our bodies a break from standing. Sitting is supposed to be undertaken in short batches to break up the motion of a dynamic day. But the opposite has become the modern way; we sit for 13 hours a day, sleep for 8, and move for 3.  And living all day on our bottoms wrecks our health.

I have spent the last 25 years running the anti-chair movement from my laboratory at Mayo Clinic in Rochester, Minnesota. I’ve learned that people with obesity who lived in the same environment as people who are lean sit 2 hours and 15 minutes more a day than lean people.

But the chair sentence extends beyond obesity. Japanese scientists found that the less you walk, the worse your cholesterol panel. Swedish scientists showed that the more you sit, the progressively greater your risk of a heart attack. One study from Sydney looked at 22,497 Australian adults. People who sat 11 or more hours per day had a 40 percent greater risk of premature death than people who sat four hours or less.

Part of our tendency to be sedentary or active appears to be hard-wired. (And to define active, it’s important to understand the acronym NEAT, or non exercise activity thermogenesis. This describes the collective little ways we burn calories throughout the day by moving, such as fidgeting or pacing while we chat on the phone, as opposed to a big gym workout).

Our research has shown that thin people are super-sensitive to “move-it” signals in the brain. A person prone to obesity is less sensitive to these signals. The good news is that if a chairaholic takes the first step, gets up and walks, the brain, like a muscle, adapts. Over time the brain adapts to its owner’s newfound propensity to walk. A chairaholic can become a walker in three weeks.

Knowing the brain’s ability to adapt, here’s the backstory of how we turned an entire sedentary company into an office of active, NEAT-embracing, chair-shunning walkers.

The Office of the Future

One day in 2007, my assistant telephoned me. “Dr. Levine, I have John Folkestad on the line. He insists that he talks with you.” My knee-jerk response was to decline, but when I learned out he’d called five times that day, I took the call.

John Folkestad was cofounder of a mid-size, highly successful financial services business in Minneapolis called Salo. He asked if I would give a talk to his staff about lethal sitting. I explained that I simply didn’t have the time.

Two weeks later, after being continually harangued by John, I walked into Salo’s offices in downtown Minneapolis. Salo was housed in a converted warehouse, redesigned with modern lines and bright colors. In less than a minute, John burst through the office doors to meet me. “Dr. Levine, I love, love, love, what you’re doing, you’ve got to do it here at Salo, and you’ve got to do it here first. You know what a six-pack is? I’ve got a keg.”

Amy Langer, a trim brunette with a smile, joined us. She explained that she and John were the joint founders of Salo, and they wanted, more than anything, for their employees to have the opportunity to work healthily.

“Why don’t we walk and talk about it?” I said. John bounded out of the office; Amy and I followed. It was winter; we started to walk through the sky bridges that connect Minneapolis office buildings.

John spoke in torrents about his need to have SALO in this new chair-free revolution. “Doctor, we’ll do whatever you tell us,” John said.

I told John and Amy what I had in mind. “I want to build a laboratory right inside your offices so we can test whether chair escape programs work in a real office environment.” Amy was silent, then spoke. “Surely, a laboratory has to be in a research institute.” I explained that this is normally so, but I wanted to measure how real people, in a real work environment, respond to the new NEAT chair-free work style. To do so, I needed a lab on site rather than bringing subjects to our lab 100 miles away.

There was silence. “Great!” John said finally. “We can give you the massage room, and you can convert it into a lab.”

John and Amy not only gave us carte blanche to transform their company’s practice, they brought in everyone from senior management to the janitorial team. We worked with Salo’s information technology team, healthcare provider, workflow managers, productivity teams, secretarial pool, and attorneys. We worked with the heat/air-conditioning company to ensure that the space would remain in thermal comfort. We hired a company that provided health coaches for Salo’s employees.

A local architecture firm developed a physical infrastructure plan so that a walking track now circled the office, Ping-Pong and gaming tables could be moved in (John and Amy paid for those) and chairs became architectural accents rather than the dominant furnishing.

We moved in two dozen treadmill desks and removed a dozen desks and chairs. Some desks were lengthened to allow mixed working—treadmill plus chair. We even changed the artwork to pieces that showed people being active and happy.

Each employee received their own activity tracker—called Gruve—that clocked every movement and all inactivity. We developed comprehensive 12-week written plans for all the employees—not just about lethal sitting, but also stress, sleep, eating, and what we called the dream tunnel: where everyone got to spell out their dream and develop a plan on how to achieve it.

In the on-site lab, we could measure how much body fat people had, how many calories they burned sitting at traditional desks or while having a walk-and-talk meeting. We measured blood sugar and cholesterol. We brought in a famed economics team to independently analyze the company’s productivity and healthcare costs. Contrary to what we expected, employees loved the lab. I still remember one man whose eyes came alive when we showed him that his calorie burn increased by 210 calories/hour when he walked at 1.5 miles an hour during a walking meeting.

Weight Down, Productivity Up: The Amazing Results

As weeks became months, Salo workers crept out of their chairs and onto the walking tracks, step devices, and treadmill desks. The entire atmosphere of the office changed. On one occasion, I went to Salo straight from a long flight from London. As I walked in, Amy was walking around the office track; beside her walked a colleague who was significantly heavier. They were in intense discussion. Both wore their regular work clothes, both were working.

We could hardly believe the data that was coming in from our lab. Not only was weight declining, but so was body fat, blood sugar and cholesterol values; the health numbers improved week after week. The financial analysis, however, provided the greatest surprise. When the financial analysis was calculated, not only had productivity improved by 15 percent, but the company showed its best quarter profits ever.

“When this chair escape program began,” Amy explained, “the office staff had a certain monotonous routine that you could feel the moment you walked in. One the NEAT program had begun and people started using the treadmill desks and walking paths, a whole other stack of activities followed.”

Employees started a competition for healthy snacks at work. The results were so tasty that it became an unwritten policy to stop bringing in cake and share homemade health snacks instead. People started to take the NEAT philosophy home. One family had a tobogganing party instead of a pizza party. Amy said she found staff members to be more self-confident and to take on challenges they hadn’t normally taken on before.

“It is easy to explain why the company did so well since you guys came. Everyone has just been happier,” John added. Multiple studies show that happy employees are more productive and more innovative.

Five years later, Salo’s chair-escape program continues. Weight-loss company-wide averages 9 pounds per person per year and profitability has continued to increase. They now define the culture at Salo as a “culture of movement.”

From Get Up! by James A. Levine. Copyright © 2014 by the author and reprinted by permission of Palgrave Macmillan, a division of St. Martin’s Press, LLC.