The Unofficial Rules of Sledding We Learned as Kids

Anyone who went sledding as a kid knows it's as much of a craft as it is a fun winter sport. 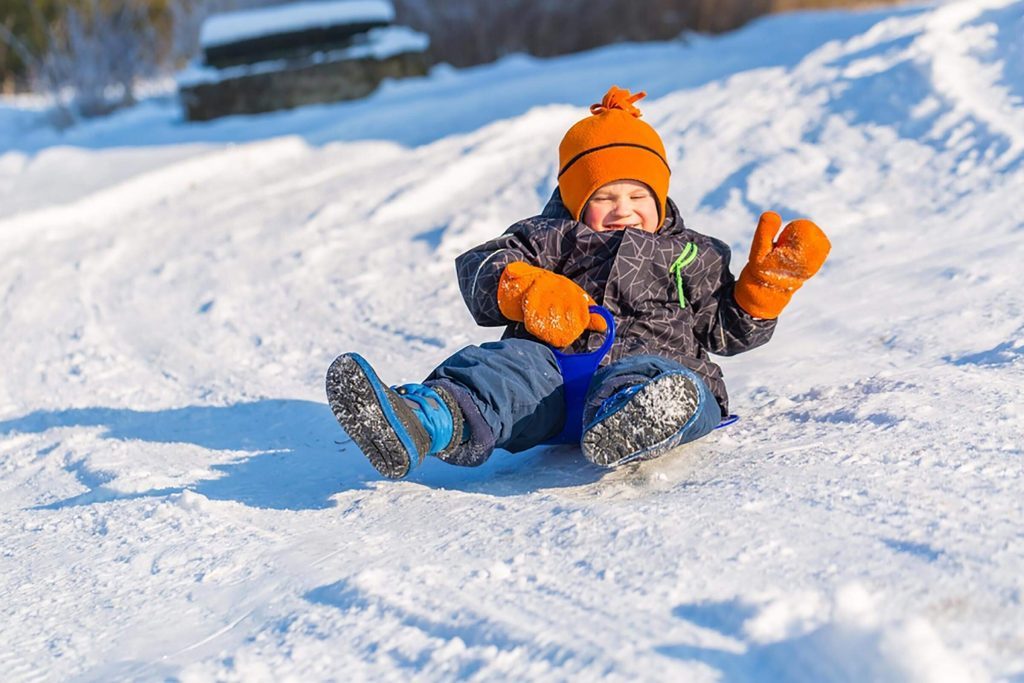 Sledding seems easy—climb to the top of the hill, hop on your sled, and let gravity do the rest. But when I was a kid, there was a trick to sledding properly at our farm. You had to know how and when to bail at the bottom of the steep hill.

If you didn’t, you’d hit a sliver of a straightaway in the snow the width of a tractor path, then go sailing over the edge of a steep drop-off into a ditch below. Worse, you might fly over the bank and into the road. In those days, there was little to collide with on the dirt road, but we didn’t want to risk it. So we practiced the art of bailing as often as we could in winter.

When the snow fell, we kids could hardly wait to go sledding in our bulging snowsuits. The hill we used was in a field that was farmed, so the snow had to be deep enough to cover the ruts. Otherwise, the sled would get stuck on the way down, which was no fun. Deep snow, though, made the climb back up the hill even harder, especially when weighed down by our sleds.

Knowing how hard that same trip is for me today as an adult with lined, winter barn boots that reach to my knees, I can’t help but wonder why we ever left the house. But the thrill was worth it. And Mom must have let us go, knowing that we’d come back inside before too long, too tired to fight with each other for the rest of the day. Come to think of it, maybe sledding was all her idea. (Moms, here’s how you can keep your kids safe when they play outside in the winter.)

Only one kind of sled worked well—the lightweight, long plastic ones. With a hill as steep as ours, anything heavier was impossible to drag up it. But anything less sturdy wouldn’t burrow through the snow; you’d just sink in the fluffy flakes.

Our parents must have considered our predicament. I remember when we were given even lighter plastic sleds that rolled up, but that whole concept backfired. They didn’t work at all. You had to unroll the sled and try to jump on before it rolled back up on its own, like a tube of wrapping paper. The speed you used to plunk onto the sled pushed you straight into the snow.

There were two main rules when sledding: You had to forge a separate climbing path from the sledding path, and you had to use the same path to go downhill each time. We learned we went faster that way.

We never climbed the whole way up the hill. It was just too far. Once we determined we’d gone far enough, we’d give it a go.

It was terrific when everything worked. I remember the short-lived rush of the wind as I whipped down the hill. At those speeds it was only a blink of an eye before you had to lurch to one side to bail out.

While we loved to watch our sleds continue on their path and go sailing over the ditch into the road like Evel Knievel clearing a long jump, the follow-up was less glamorous. You had two choices: trudge parallel through the deep snow along the bottom of the hill to the driveway and retrieve your sled, or take the more laborious shortcut through the deep snow along the side of the ditch to reach the road. And so we learned that when bailing, hang tight to the rope of the sled.

By then, you were laughing and giggling so hard while digging your face out of the snow that the person at the top of the hill was likely shouting at you to hurry up and get out of the way. It was her turn after all, and there were rules to follow.