A Sports Writer’s Guide to Buying a Team Jersey

The biggest commitment a fan can make is buying a uniform. So how do you make an important choice like this? 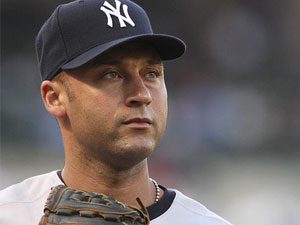 There are many ways for fans to show their allegiance to their favorite pro sports team. Every team sells clothing, bumper stickers, and key chains. Teams even sell underwear, bar stools, and, my favorite, lawn gnomes, though a word of warning, if you put those three together people will judge you.

The three staples of sports-team-themed apparel, by far, are T-shirts, hats and uniforms. Here’s the thing, though: t-shirts and hats are cheap and easy. The biggest commitment a fan can make is buying a uniform. Hats and t-shirts make the offhand statement, that, “Yeah, I guess I support the Banana Slugs or whatever.” But a uniform? A uniform yells, “IT’S SLUG TIME!! GO SLUUUUUGS!! SLUG POWER!! BLLEEEARRGH!!!”

Wearing a team’s uniform is more than nonverbal screaming at passersby. It’s a commitment and a public vow of loyalty. It’s like a peacock getting to choose its feathers and picking feathers with a Cubs logo. It’s a leap not made by the faint of heart. Nor, for that matter, the faint of wallet. The Houston Astros have the worst record in baseball; an authentic Jason Castro jersey is currently going for $284.99. (Because $285 would be ridiculous.)

So how do you make an important choice like this? What factors are there to consider? Well, madam or sir, you’re in luck: This is the official Sports on Earth Guide to Jersey Buying.

First, congratulations. You’re about to take a momentous leap into the outer reaches of fandom. Complete strangers are now 36 percent more likely to dislike you intensely prior to introduction. The time has come to pick a team! Likely you’ve already picked a team, but on the off chance you haven’t, allow me to present some ground rules.

Ground Rule 1: Don’t choose the Yankees or Red Sox. Unless you’re a fan of one of those teams. But even then, don’t.

Ground Rule 2: You’ll want to pick a team with a long and rich history, like the Yankees or Red Sox.

Ground Rule 3: But seriously. Not the Yankees or Red Sox.

A favorite team is enough information to go with if you’re just buying a hat or a t-shirt, but with a uniform you’ve got to be more specific. You’ve got to pick a player’s name and number (blank uniforms are for the weak and will not be discussed here). Keep in mind, this player’s name and number will be on your uniform forever, and you will be associated with their greatness or lack thereof. Pick wisely and once day you’ll be able to smugly tell someone at a sports bar, “Yeah, this was Jerkson’s number his rookie year.” Pick poorly and you’ll be mocked mercilessly… or you’ll have to buy another jersey.

Players fall into a few categories that you should be aware of. You don’t want to be caught off-guard making a statement that you didn’t want to make.

This is the centerpiece of the team, the undisputed guy, the future Hall of Famer (or at least the future Hall of Nearly Greater) who sets the standard for your team of choice. This would be Derek Jeter or David Ortiz if Yankee or Red Sox jerseys were allowed, but since they aren’t, this is Miguel Cabrera, Andrew McCutchen, Joe Mauer.

The Current Star is a safe way to navigate the treacherous waters of jersey purchasing; it clearly states your interest in your team in a non-controversial, serious, and slightly bland way. What’s more, the shelf life of this jersey is very long. In 20 years you’re not going to be made fun of for wearing a Miguel Cabrera jersey, and nobody is going to say, “Joe Mauer? That dude ate human babies!” because Joe Mauer does not eat human babies. He’s too good at baseball and doesn’t have the time.

2. The Hall of Famer

This is a great player from the team’s past. This would be Babe Ruth or Ted Williams if Yankee or Red Sox jerseys were allowed, which again, they are not. This is a completely safe choice. The player’s career is already over, so there’s no chance taken on his production going off a cliff, his getting traded, or worst of all, choosing to sign with another team as a free agent. You can wear this jersey from the time you buy it until you die. You can wear it in your casket.

The downside here is that it doesn’t speak to your love of the current team as much as the franchise in general. This can be desirable if your team is, to put it gently, awful — for example, Cubs fans, you might be better off with an Ernie Banks jersey than trying to force it with a Starlin Castro. But should the Cubs actually win some games in the near future, you’re probably going to end up buying a Kris Bryant jersey. So maybe just suck it up and buy one now — then you can pull the rookie-number-thing at the sports bar in later years.

Statement Made: I like this team and/or player and I have an appreciation for history, but I still listen to music on my 8-track player while sitting on the plastic cover of my reclining chair because I am old.

This is the part-time player whom all the hardcore fans love. Buying his jersey is a huge statement in support of the current team. It says, “I know this team well. I don’t need Joe Star’s jersey, that’s too obvious — because I not only know Honker Buttsky is a backup second baseman, I know he’s a fan favorite and HONKER! WHOOO!” Every time you wear it to a game people are going to compliment you on it and smile and give you thumbs up and high-five you in beer lines. “Buttsky? Heck yeah!” And if old Honker ever does get a hit with men on base, everyone around you is gonna flip the heck out.

It’ll be great for about four months. Then Honker is going to get cut or traded for a stuffed crust pizza or sent back to Triple-A, and you’ll be left with a $300 jersey with “Buttsky” on it, the name of a player who kinda sucks and isn’t on your team anymore. It will be awesome while it lasts, though.

This is basically picking the worst moment of your bitterest rival and then putting it on a jersey. This is a Yankees fan in an Aaron Boone jersey, or a Bill Buckner jersey. This is a Cardinals fan in a Bartman jersey. This is mean and nasty and awful, but it wears forever because nobody ever forgets the worst moment in their team’s history. You’ll be hated for wearing it by fans of your rival, but whatever, they’re stupid and smelly and you hate them anyway. On the plus side, this one lasts for as long as you have the guts to wear it.

Statement Made: Hey, screw you, buddy!

This is less ‘inside’ than the Indie Hero, but not as obvious as the Current Star. This is Brandon Phillips instead of Joey Votto, Dexter Fowler instead of Troy Tulowitzki. This makes a nice statement about knowing the team, and doesn’t carry the dangerous connotations of being a bandwagon fan like the Current Star does. On the downside, this guy isn’t as good as the current star.

This is kind of the opposite of the Ironic Goat. This is a guy associated with one great moment, maybe the greatest moment, in team history. He’s not necessarily a great player on his own, but everyone remembers that one moment he came through. The downside is, he probably wasn’t particularly good and/or this guy isn’t on the team anymore, so you’re not supporting your current team by wearing his jersey. Examples of this kind of player include Luis Gonzalez or Bill Mazeroski.

Statement Made: Remember that thing that happened? Loved it!

This is really nothing more than showing off how well you know the current team. The downside is you’re associating yourself with a lesser player, one who probably doesn’t contribute much. If you’re lucky, the team will win something and that will make the jersey worthwhile. But even if that doesn’t happen and you now own a 2010 Orioles Ty Wigginton jersey, there is a silver lining. As in popular fashion, jerseys go out of style but then, years later come back into vogue. So The Nobody will play fine in 20 years because, “Hey! Remember that guy?”

Subset: the player has a spectacular name such as Butch Huskey or a very funny name, such as Dick Pole.

Statement Made: I’ve heard of some guy and you haven’t! Unless it’s Dick Pole, in which case you probably have.

Don’t do it. There is no need to resort to this. Okay, maybe you’re a Mets fan with the last name of Wright, or you’re the rare Rockies fan with the last name Tulowitzki, but probably not. Probably the only thing that putting your name on an official jersey will accomplish is to divest you of your money. Oh, and scorn. You’ll get all the free scorn you want.

Statement Made: I’m a nitwit.

Remember, team jerseys are an important part of fandom, or as my wife would say, “Take that thing off, you look stupid.” With that all in mind, here is a breakdown of the jersey to buy for each team. There are a few simple rules to follow.

1. When possible, lean towards current players. You’re a fan of the current team and your jersey should reflect that.

2. Franchises move, but you can’t count players who played for an earlier incarnation of your team. So, Rangers fans, no Walter Johnson jerseys for you.

3. Watch out for pitchers. You never know when their arms will go boom, and then you’ll be left with the jersey of a guy on the disabled list who might not be the same when he returns.

4. Always check the contract situation. If the guy is on a long-term deal, you know your jersey is going to stay current longer.

MORE FROM SPORTS ON EARTH:

What Not to Say In a Sports Bar »

The Most Tortured Fans In Baseball »

Who Has the Most Loyal Fanbase? »