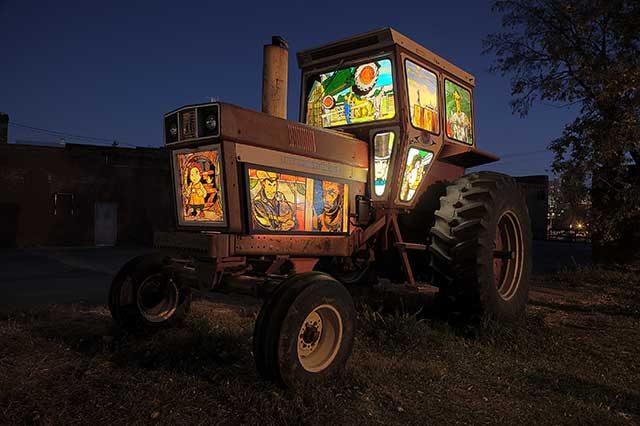 Karl Unnasch says his artistic talent took root under a pool table on the family dairy farm in Pilot Mound, Minnesota. When he was a boy, he crawled under the billiard table one day, looking for a little peace and quiet from his five siblings, and he noticed that the underside was nice, smooth slate.

“I thought, That’s just like a chalkboard. So I got a piece of chalk and a wet rag, laid on my back and began drawing,” he recalls. “When I finished one drawing, I’d erase it and start another one.”

About the same time, Karl began to appreciate relics of bygone days that he found on the farm. “They had history to them,” he recalls. “I dreamt about what some rusty part or broken shard was used for, and I imagined all kinds of interesting things I could make out of them.” 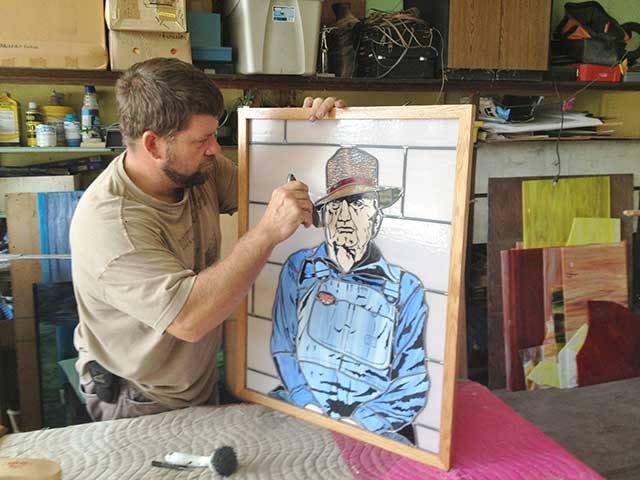 And it all came together in 2010. By then, Karl had become a celebrated sculptor and stained-glass artist. When he was asked to create a piece for the Minnesota Biennial Exhibition, he thought back to all the hours he spent chisel plowing and disking.

“The cab of the tractor became a place for me to think and process information,” he says. “It was a kind of sacred space for a farm kid. You’re learning skills that are turning you into an adult, whether you like it or not. You’re sloughing off your childhood fantasies and incorporating adult perspectives, because you’re doing an adult job—running a high-powered piece of equipment.”

At the same time, Karl says, his head was also filled with movies, TV, and comic books. “With these stained-glass windows, I wanted to pay tribute to farm people, ideas and icons, as well as all the fantasy characters that kept me awake while driving the tractor back and forth.” 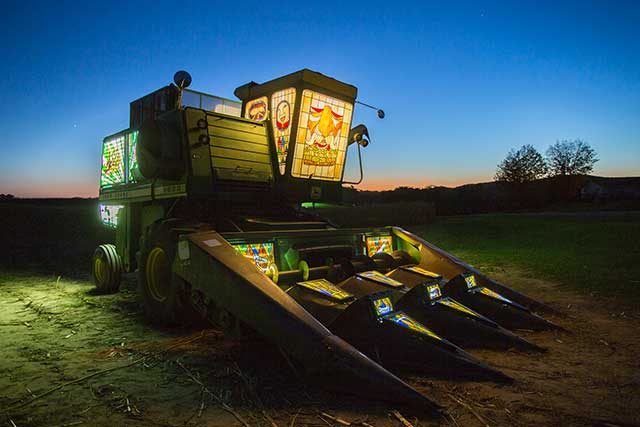 So Karl borrowed his father’s Farmall 966 and created Near-Mint Condition, a heroic tribute to country boys. The stained-glass panels on the tractor include Bilbo Baggins, Abe Lincoln, Pa Ingalls, Luke Skywalker, and Clark Kent casually lifting a tractor with one hand—all country boys who livened up his daydreams while he drove up and down the field.

After the success of his tractor- based project, Karl created Ruminant (The Grand Masticator) in 2013 to pay tribute to the farmer, food, and agriculture. The 6600 John Deere combine and its 34 stained-glass panels explore how food is harvested and processed, and how art is pondered and enjoyed by its viewer. 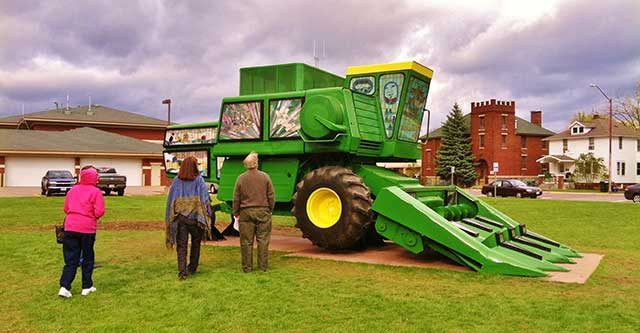 “We are ruminants of visual language in the same manner as a cow is of its feed or a combine is of its crop,” he says.

The set of panels on the corn head showcase a series of traditional rural hand tools from Eric Sloane’s book A Museum of Early American Tools. Karl plays with the concept of chewing in the cab’s stained-glass panels, led by a man chomping into an ear of sweet corn on the front window. 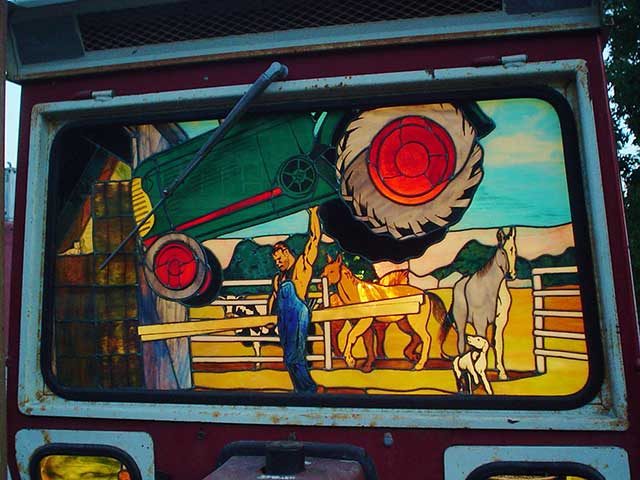 The combine also pays homage to other famous farm-oriented artwork, including panels inspired by one of Thomas Hart Benton’s WPA murals; Batman and Robin in a victory garden from a 1943 comic book; and a cartoon version of Grant Wood’s American Gothic featuring earthworms with a pitchfork and watering can.

Ruminant is now on permanent display at Harvest Park in downtown Reedsburg, Wisconsin.

“Creating these one-of-a-kind pieces of art was like having a serious type of fun,” Karl says. “People love to see it, and that just increases my wonderment of seeing them enjoy this work.”