This Is the State Where the Most McDonald’s Are Closing

You might have to look a little harder to find the Golden Arches in this state.

If you’re hungry for a Big Mac, your options may be more limited than they used to be. The number of McDonald’s franchises in most states has dropped considerably over the past two years, according to 24/7 Wall St. Nationwide, the count has gone from 15,828 franchises in 2016 to 13,948 in 2018.

So, which state had the biggest decline in golden arches? Rhode Island. The smallest state in the union saw the greatest drop in the number of McDonald’s, from 44 in 2016 to 31 in 2018. That’s a decline of nearly 30 percent! Rhode Island is followed by Ohio, where the number of the franchises decreased by 25.2 percent over the same time period, from 823 to 616. Find out more facts about McDonald’s you probably didn’t know.

ⓘ
But why are the franchises closing? The analysts at 24/7 Wall St. note that company management has discouraged “mom and pop” franchises, and the number of customers has declined over the years.

But it’s not all bad news for one of the most successful fast-food chains in America. Five states are bucking the downsizing trend, with more McDonald’s stores now than they had two years ago. The state that had the highest growth in the number of golden arches? Hawaii, with an increase of 13.8 percent. And there’s are still plenty of places around to get a Happy Meal. California has the highest number of McDonald’s in the country, with 1,295 restaurants. One of McDonald’s secrets to success is the speed at which they operate–speed is of utmost importance at the fastest drive-thru in America.

Next, don’t miss these 8 secret menu items at McDonald’s you need to know about.

You can pay less for your favorite meal

Saving big on your favorite Mickey D’s order isn’t rocket science—and we know the best deals. Try ordering a sausage muffin ($1.29) and a side of round egg ($1) to make a cheaper version of the Sausage Egg McMuffin ($3.29). Other menu hacks: A sundae with a McFlurry topping is cheaper than a McFlurry, and ordering any sauce on the side is free of charge. Don’t miss 75 more mind-blowing facts about McDonald’s. 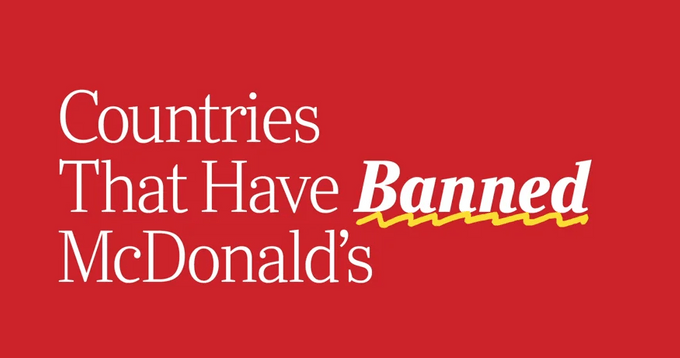 The ice cream machine really does break down

No, we’re not lying—there is a reason why it seems the ice cream machines are always broken. If the mixes for McFlurries and milkshakes are poured in the wrong sections, the entire machine could be out of commission for the day. You might be better off ordering a soda, instead.
Sorbis/Shutterstock

There is no official “secret menu”

If you ask for an off-the-menu item, we might not know how to make it. Just tell us exactly what you want; we will whip up almost anything we have the ingredients for. Try these McDonald's "secret menu" items you never thought to order.
Sorbis/shutterstock

Know your order before you reach the register

If you’ve been standing in a long line, be ready to order when it's your turn. Your indecisiveness can be a major inconvenience for us—not to mention the other customers waiting behind you in line.
Seika Chujo/Shutterstock

Drive-throughs can’t serve you on foot

Same goes for customers on bicycles and electric scooters. According to McDonald's policy, we can only serve people who are driving a motorized vehicle in the drive-thru lane. Trust us, it's for your own safety. Check out the craziest things drive-through workers have ever seen.
8th.creator/Shutterstock

Ordering double lettuce and double cheese on your Big Mac, for example, will cost you an extra 20 or 30 cents each.
Nokuro/Shutterstock

Craving McDonald’s at 2 a.m.? Make sure you have cash on hand. Because the 24-hour locations must restart their cash register systems every night, there is always a certain time period when we can only accept cash.
8th.creator/Shutterstock

You can get creative with the sauce

You won’t always love the sauce that comes with your order. But just ask us to substitute another sauce, instead—and don't worry, we won't charge you for it. You won't want to miss these facts you never knew about McDonald's fries.
Sorbis/Shutterstock

We don’t wear gloves—but it's sanitary

Rest assured that employees are required to wash their hands at least once an hour. Gloves, on the other hand, can harbor a lot more bacteria than our clean fingertips. Steer clear of the McDonald's drink employees say never to order, though.
DwaFotografy/Shutterstock

Artisanal sandwiches are the most time-consuming menu items to make

So be prepared to wait a little longer for your order. (The chicken alone takes an average of eight minutes to prepare!) Same goes for Happy Meals; the toy, drink, and dessert take extra time to track down.
TY Lim/Shutterstock

The egg McMuffins are made with real eggs

We physically crack the shells and use special rings on the grill to make them perfectly round. Find out the truth behind 12 fast food myths almost everyone believes.
Stokkete/shutterstock

You should always ask for a receipt

Certain people are paid to visit McDonald’s restaurants and rate their experiences online, and they are reimbursed for their purchase. So if a customer asks for a receipt, we are more likely to serve that customer first and give them the freshest food.
Boris-B/Shutterstock

It’s tougher to get hired than you think

Although our jobs might seem easy, a surprising number of applicants are turned down in the hiring process. You'll also want to know these 12 things you haven't heard about Chicken McNuggets.
8th.creator/Shutterstock

Employees who work the drive-through window often remain standing for many hours at a time. All that standing can make our lower backs and feet ache.
Ken Wolter/Shutterstock

... But we get great employee discounts

Working for the famous golden arches has its perks. Popular companies like Apple, Via Rail, Hotels.com, and Payless all give us sweet discounts.
studiogi/Shutterstock

Since they’re among the least-ordered items on our menu, they can stay on the shelves for a long time. Translation: They might not be as fresh as you think. By the way, this is the secret ingredient that makes McDonald’s apple pies so amazing.
8th.creator/Shutterstock

…But the beef is Grade A

This might surprise you, but our burgers are made of high-quality meat. The only ingredients we add are salt and pepper. Next, learn 14 more things you never knew about the Big Mac. [Sources: Eat This, Business Insider, The Sun]

Here’s Why McFlurry Spoons Have That Square Handle