A Hurricane Sunk Their Ship. This Rescue Swimmer Was Their Only Hope of Survival

A hurricane sank their 212-foot freighter and was about to claim their rescue raft too. The last hope for the 12 sailors was a Coast Guard crew daring enough to helicopter in.

The Category 4 hurricane bearing down on the Caribbean started as a tropical depression 414 miles out in the Atlantic. Meteo­rologists paid it little attention—even if it grew, projections showed it staying far from land. But hurricanes have a way of defying expectations, and by the time it blew into the Bahamas on October 1, 2015, it brought winds that would eventually reach 140 miles per hour, compelling the National Hurricane Center to issue this blunt warning to anybody in the vicinity: “Preparations to protect life and property should be rushed to completion.” By then, the squall had a name: Hurricane Joaquin. (This is what hurricane categories really mean.)

Among those making preparations to protect life and property were the crew members of a ship caught in Joaquin’s path. Three days earlier, the freighter Minouche had left Miami with 12 sailors on board, mostly Haitians, heading for Port-de-Paix, Haiti. Its cargo included food, two generators, and 800 pairs of shoes destined for a Haitian mission called Waves of Mercy.

But as the 212-foot-long boat battled up to 30-foot waves, that cargo started to rock loose. The shifting weight caused the ship to list to its left, forcing the crew to add extra weight to the right. As they worked, a monster wave struck, knocking the cargo booms loose and swinging the giant cargo cranes to the left side of the ship, compounding the list. The adjustments, the countermeasure—nothing seemed to work, and Joaquin kept up its assault. The crew began tossing containers overboard in a desperate scramble to stabilize the vessel. That was when they lost engine power.

With the ship unable to navigate, the storm took over, turning the boat until it was broadside to the current. Drifting and powerless, the Minouche was nature’s punching bag. Night was descending, and there was nothing left to do but enact the terrible routines that every sailor dreads. A crew member activated the emergency signal that provided would-be rescuers with the boat’s location. The captain, Renelo Gelera, authorized a distress call on the Inmarsat satellite network and then ordered his men to prepare to abandon ship.

The coast guard team stationed on the island of Great Inagua in the Bahamas had been anticipating a fairly uneventful deployment—­snorkeling, fishing, hanging out. But Joaquin changed all that. At about 8 p.m. on Thursday, October 1, the team received word of an emergency. The freighter Minouche was going down. On the phone, Commander Scott Phy, calling from Florida, had a question: Could a chopper crew venture into the storm? Pilot Dave McCarthy, 36, didn’t hesitate to muster his team: rescue swimmer Ben Cournia, 36; lieutenant and copilot Rick Post, 28; and flight mechanic Joshua Andrews, 32. (This is why it’s actually safe to fly through a hurricane.) 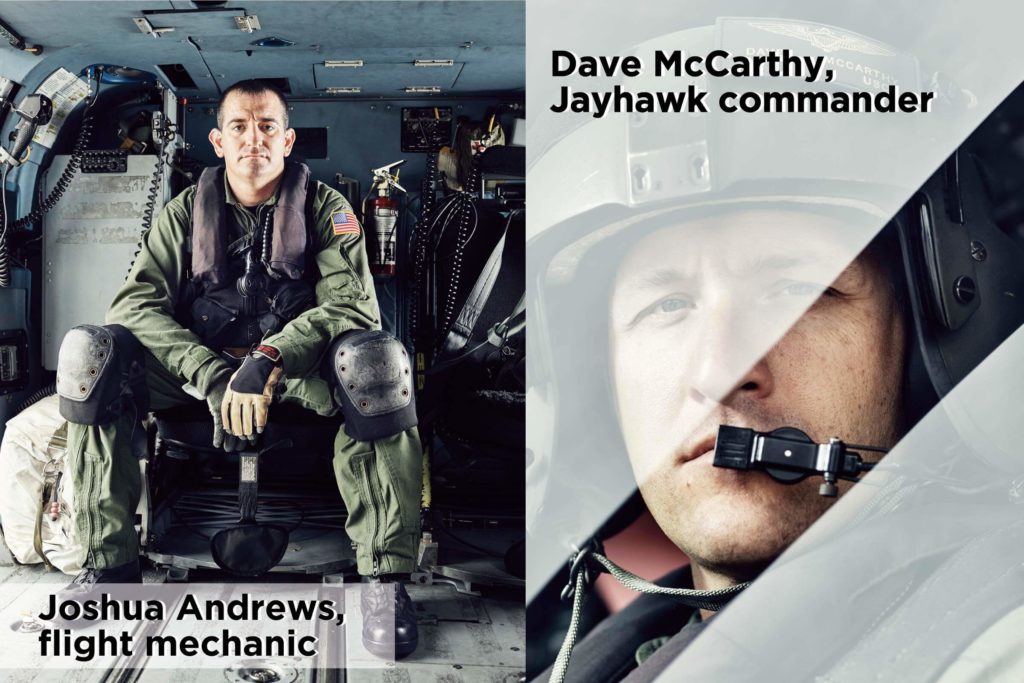 Outside, the night was an inky black, and McCarthy and Post strapped on their night-vision goggles. Against the blowing force of the storm, Post maneuvered the chopper off the ground and pointed the aircraft south. The rotors thudded. The radios crackled. The fearsome wind pushed the Jayhawk forward, up, and to the side. (Here’s how Hurricane Sandy wrecked one of the world’s most iconic ships.)

On the deck of the Minouche, the crew of 12 strapped on life vests. The men deployed the life raft, which inflated in the water to form a big black hexagon with an orange tent canopy. They jumped in and waited for help to arrive. Tiny lights on their life preservers glowed in the dark. 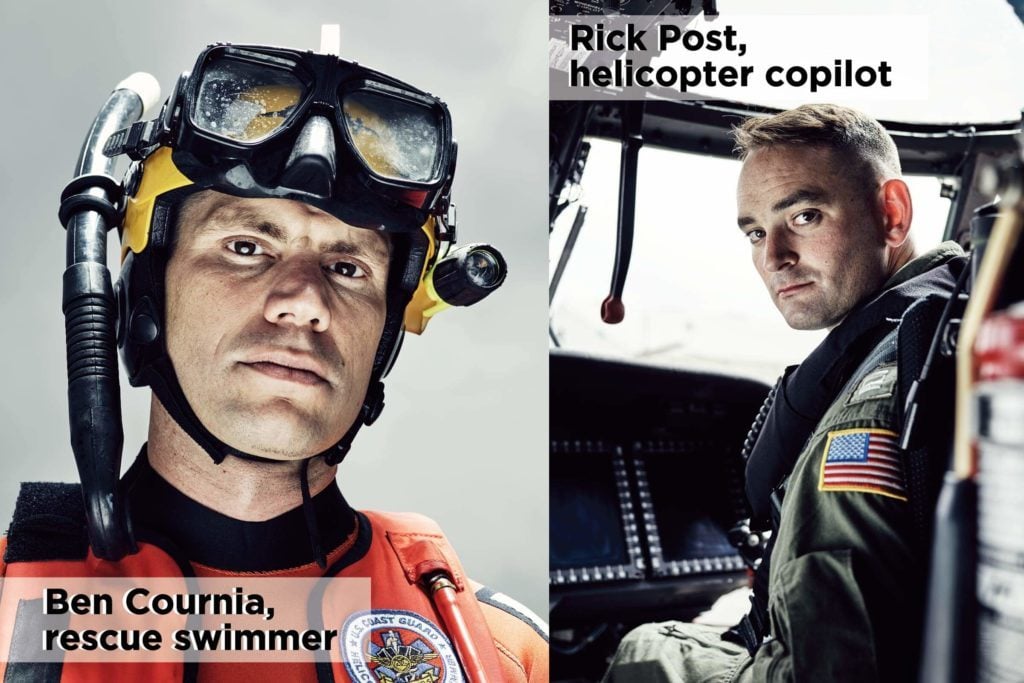 After about 30 minutes in the sky, the Jayhawk reached the Minouche. Below was the spectral outline of the doomed freighter. All its lights were on. The helicopter zipped by in a sweeping circle, searching for the raft; when the Jayhawk came around again a few minutes later, the decks were already underwater, glowing a dull amber. The copter made another orbit. This time the ship was gone; only light was visible beneath the waves. The speed of the submersion shocked the chopper’s crew.

The raft bobbed in the waves a mile or so from the ship. The wind was buffeting the Jayhawk, and the rain and dark were messing with Post’s equilibrium. Instead of looking out the windshield to get his bearings, he had to rely on the hover bars on the instrument panel that showed the craft’s relationship to a fixed point.

Cournia strapped on his swim helmet, buckled his vest, donned his mask and fins, stepped to the door, and looked down at the maelstrom 30 feet below. A blast of wind rushed in. The more I stand around, Cournia thought, the more nervous I’ll get. So let’s start moving. He flashed Andrews a thumbs-up.

“Swimmer’s ready,” Andrews shouted into the radio, knowing he needed to be the pilot’s eyes. After a few final checks, he got the OK. “Swimmer’s on the way down,” he announced as he lowered Cournia on a cable. “Swimmer’s in the water. Swimmer’s away. Clear to move.”

To Cournia, the water felt reassuringly warm, but the ferocity of the waves caught him off guard. He was amazed at how fast the raft was moving. Catching up and grabbing hold, he peered inside. Twelve faces stared back, the whites of their eyes visible in the dull glow of their lights. Cournia explained to the sailors that he was going to get them all into that helicopter whooshing above, one at a time. “Any questions?” A crew member asked about their ship.

“It’s gone,” Cournia told them. Shock spread across their faces. It was as if, floating alone out there in the storm, they were only now grasping the gravity of their situation.

After seizing the most frightened-looking man in the raft, Cournia pulled him into the water and signaled to Andrews to lower the steel basket, a kind of walled metal seat. He loaded in the survivor, then turned to swim back to the raft—only it wasn’t there. Wind and current had pulled it a football field away. It took Cournia a good five minutes of hard swimming to catch up. By the time the first sailor was pulled into the helicopter, Cournia had grabbed another sailor and waved for the basket. After sending it up, he noticed the raft had again drifted.

Watching from the Jayhawk, Andrews wasn’t sure Cournia could last if he was constantly chasing his target. He and McCarthy decided to “hover taxi” Cournia, dangling him from the cable above the waves until they reached the raft. This worked for a few rescues, but then Cournia hit a snag. He pointed at one scared survivor and pulled him from the raft. Terrified, the man screamed and jumped into the water on top of Cournia. In a panicked clench, the sailor wrapped his legs around Cournia and pushed down on his rescuer’s shoulders, which threatened to drown them both. The elite swimmer’s training kicked in. Suck, tuck, and duck. He sucked in a full breath, then tucked his chin down to protect himself from being inadvertently choked. He wiggled one arm free from the man’s crazed embrace and tapped him gently to let him know everything was OK. But the sailor freaked out more. With his free hand, Cournia jammed his thumb into a pressure point under the sailor’s jawbone; he also managed to ram the thumb on his trapped arm into a pressure point above the man’s left elbow. The sailor froze. Cournia quickly grabbed him in a cross-chest carry and swam to the basket.

The next few rescues went smoothly, but only 8 of 12 survivors were in the cabin when McCarthy, watching the fuel gauge, signaled that they had to return to base. Andrews hoisted Cournia up to the Jayhawk, and the exhausted swimmer yanked off his mask. “There are still people there!” he shouted.

McCarthy was firm: “They’ll be OK. They’re on the raft.”

The chopper took the initial rescues to the base, refueled, and flew back to the raft about an hour later. It was around 3 a.m., seven hours after the crew had received the initial Mayday call. Cournia dropped into the waves again and quickly recovered one of the four remaining sailors from the raft. But during the hoist, a wave caught the basket—with the man ­inside—just as a gust of wind dropped the Jayhawk. The wave dragged the basket away from the chopper, as if it were a hooked fish pulling line from a reel. Andrews desperately played the cable out while furiously directing the pilot. The basket, yanked from the helicopter, had pulled through the wave and come swinging back like a pendulum. After several harrowing minutes—­for the crew and for the man yo-yoing in midair—it reached the Jayhawk. The sailor inside, frozen in shock from the ordeal, rolled out onto the cabin floor.

Afterward, as Andrews guided the cable ferrying the swimmer toward the raft, he felt a snag on his glove. A few strands on the cable had broken. There was no way around it—they would have to swap helicopters. 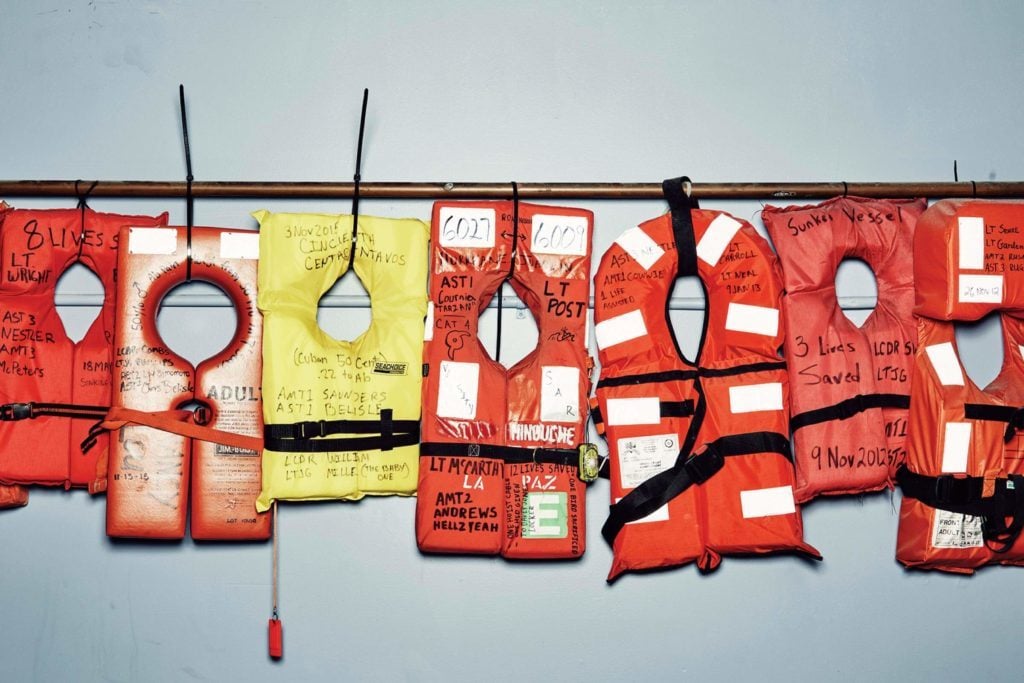 By around 4:45 a.m., when the Coasties returned to the Minouche’s crew again in a new chopper, the storm had grown even worse. Lightning, combined with the static electricity generated by the helicopter itself, had the potential to charge the metal all around them. Cournia was recovering the first of the three remaining survivors. As the cable lifted the basket out of the water, he reached up to steady the seat, and bam! An electric shock convulsed him. After the charge passed through, he pried his hands off the steel. There was nothing he could do, he thought, except be careful. After aiding the last two survivors, Cournia was lifted, and the Jayhawk returned to Great Inagua just as dawn began to stain the gray clouds orange.

The Minouche’s Haitian survivors eventually returned home, and most have recently returned to sailing.

For the Jayhawk crew, one image is forever seared into their minds: that darkening glow as the Minouche went under. “It was one of the eeriest things I’ve seen in my life, that 212-foot vessel all lit up,” says Post now. “It still gives me chills.” 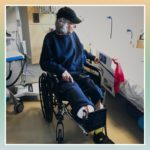