After a Salon Turns Away a Physically Challenged Woman, a Stranger Makes a Beautiful Gesture

"She’s a girlie girl. She wants to look pretty. So why can’t she?"

That may well be Angela Peters’s motto. In July 2018, Peters, 36, rolled her wheelchair into a nail salon located at the Walmart shopping center in Burton, Michigan, with the idea of bedazzling her fingers. But Peters, who has cerebral palsy, was turned away. The salon (which is not owned by Walmart), she says, told her that they were afraid it would be too difficult to properly paint her nails given that her hands shook. What was meant to be a day of beauty bliss for Peters was now a disappointment.

Watching the interaction from a few feet away was a Walmart cashier about to go on her break. Ebony Harris, 40, recognized Peters as a Walmart regular. Now what she recognized in Peters was a kindred spirit. “She’s a girlie girl,” Harris told ABC12 of Flint, Michigan. “She’s just like you, me, my daughter, anybody. She wants to look pretty. So why can’t she?”

Harris approached Peters. “Do you want me to do your nails?” she asked.

A smile spread across Peters’s face. “Yeah!” Don’t miss these other 15 real-life acts of kindness that will warm your heart.

Harris escorted Peters into the beauty aisle, where they shopped for nail polish. They settled on a bright blue—a statement color that would catch every eye. They then made their way into a neighboring Subway, found a table for two, and set up shop. Harris gently took Peters’s hand into hers and carefully began painting her nails.

“She moved her hands a little bit, and she kept saying she was sorry,” Harris recalls. “I told her, ‘Don’t say that. You’re fine.’”

If anything, the shoe was on the other hand, as it were. “I was a little nervous and was shaking because I didn’t want to mess her nails up,” Harris admitted to ABC News. “I told her she’s a blessing to us, to anybody, not just me. She makes me look at life and appreciate it much more than I have.”

A fellow Walmart employee stopped by to suggest that the blue nails could do with a little extra zing. So they added some glitter polish. Check out these other 12 true stories that will restore your hope in humanity. 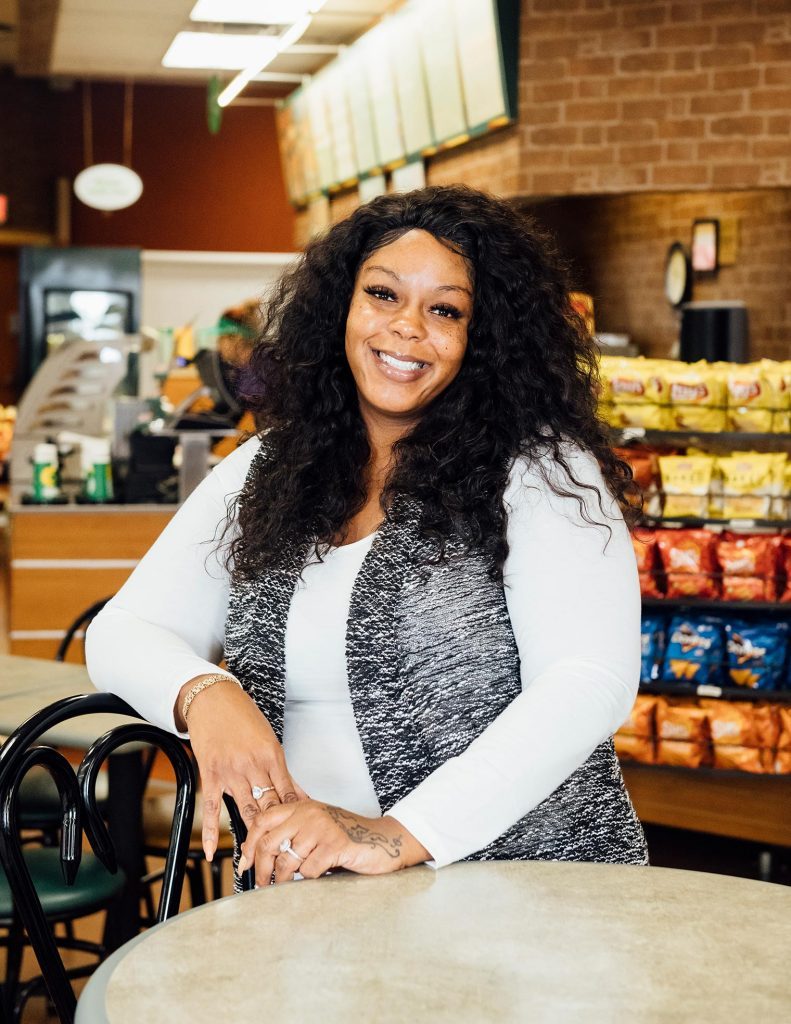 Watching it all with awe and admiration was Subway employee Tasia Smith. What struck her most was the ease and gentleness displayed by Harris as she painted Peters’s nails, all the while chatting as if they were old friends. Smith was so taken by the scene that she wrote about it on Facebook. “They were so patient with her,” she wrote. “Thank you to the Walmart workers for making this beautiful girl’s day!”

Peters, who runs a poetry website, heavenlypoems.com, harbors no bitterness toward the nail salon that turned her away. (The salon claims they denied Peters service because they were too busy.) “When people do us wrong we must forgive,” Peters wrote on Facebook. “I just [want to] educate people that people with different challenges, like being in a wheelchair, can have our own business and get our nails done like anyone else.”

Though in Peters’s case, there was certainly something special about this manicure. Flaring out her fingers to better show off her nails, she told ABC12, “I’m like, ‘Wow! These are amazing!’” Feeling inspired? Try these powerful ways to give back without breaking the bank.