He said it was his honor and duty as a Muslim to return the property to the owner.

To celebrate his girlfriend’s birthday, Luke Fortune drove from a small town in Central Oregon to Portland, where he parked his car in a paid garage overnight. The next morning, he discovered that the car’s window had been smashed, along with his dreams for the future: His backpack and computer were gone.

“Everything important to me was on that computer,” said Fortune, 21, who is studying to become a paramedic. “My classwork, every paper I’d written, and all the programs I needed for my paramedic tests. Every letter I was working on for job applications. I felt sick.” If your laptop gets stolen, here’s how you can protect your data from thieves.

Two days after the theft, another young man was standing outside his apartment, also in Portland. Masoud Almazrouei, 29, was an exchange student from the United Arab Emirates. He had been approached by a man who said he had a computer for sale. Only $200. Almazrouei, who had been in the United States for only a year, admits now that he was ­naive. But he needed a computer, so he bought it, took it home, and turned it on. Within seconds, he saw files and photographs.

“I wondered who would sell a computer with all of this on it,” he said. “I realized it could be stolen.” Almazrouei found what appeared to be the owner’s cell phone number and called it. 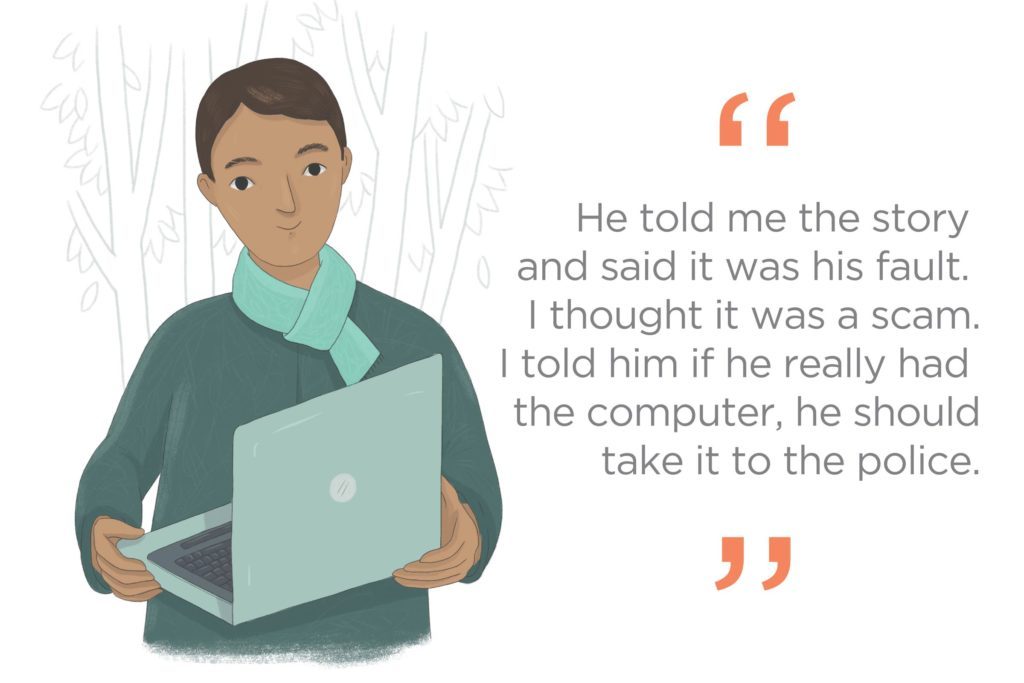 “This guy with a thick accent told me he had my computer,” Fortune said. “He told me the story and said it was his fault. I thought it was a scam. I told him if he really had the computer, he should take it to the police.”

Soon after, a police officer called Fortune to say that a man had dropped the computer off and had said he was sorry. He passed along the man’s number. (Restore your faith in humanity by reading more incredible acts of kindness from strangers.)

Fortune called and thanked Almazrouei and insisted on paying him a reward of $200, the money he was out. Almazrouei refused. He said it was his mistake to buy the computer from someone he didn’t know. More important, he said, it was his honor and duty as a Muslim to return the property to the rightful owner. “I saw a photo of this man in his paramedic uniform,” Almazrouei said. “They help people. He is a good man. I don’t want my money back.”

Still, the encounter produced its own kind of rewards. For Fortune, it was a lesson in cultural awareness amid the sometimes bitter national debate about immigrants, especially from the Arab world. “I’m from a small, mainly white town,” Fortune said. “I’ve never met a Muslim. He’s a good man.”

Almazrouei’s lesson was perhaps more complex. Shortly after moving to the United States, he’d had his own brush with crime. While standing on a street in Eugene, Oregon, Almazrouei had been confronted by a man who punched him and told him to “go home.” (The man was later arrested.) Rattled by the encounter, Almazrouei moved to Portland, and not long after, he had his experience with the thief and Fortune’s computer. When a story about the two young men’s encounter made it to the local papers, Almazrouei received a call from Wim Wiewel, the president of Portland State University, where Almazrouei is studying economics. Impressed with his student’s integrity, Wiewel gave Almazrouei a new MacBook Pro.

“We thought since you gave back the laptop, we should give you a laptop so that you’ll have one,” Wiewel told him. “We’re very proud of you. It was a great story, but you did the right thing.”