He ate the rats in the trenches and the soldiers rewarded him with their canned corned beef. 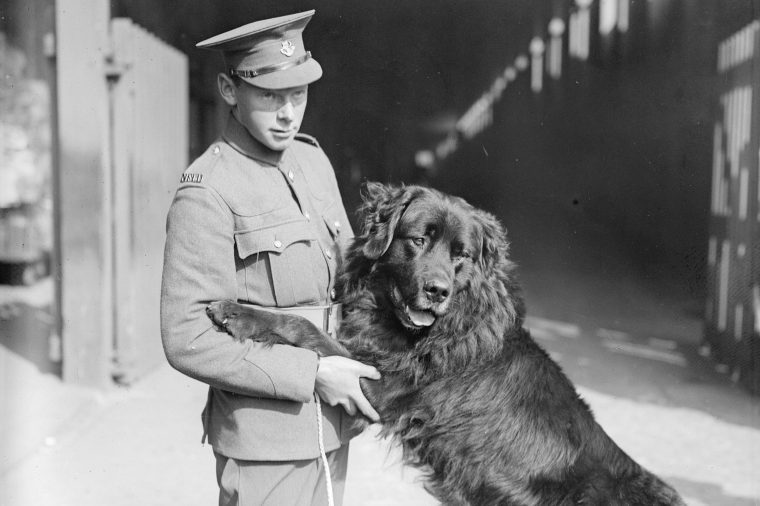 Just like Dad, my childhood dog, Bill, served in the trenches of France during World War I. Suited up in curly gray fur with white patches on his face, chest and feet, Bill followed the orders of the men in his Canadian regiment and boosted morale before returning home with Dad after the war.

Dad first saw Bill strolling along the muddy, shell-torn streets of a village in northern France after the Battle of Vimy Ridge, Canada’s most successful campaign of the war. An army engineer, Dad operated a motorcycle between the front lines and headquarters.  He was returning to the front when he spotted the mud-covered dog, which he carried back with him on his motorcycle.

The regiment adopted Bill as its mascot. He became an immediate hit with the men because he killed the rats that infested their trenches. The Canadian troops lived off of canned corned beef that they nicknamed “monkey meat.” They hated it, but Bill loved it. So whenever Bill killed a rat, he was rewarded with a can. Soon soldiers in other units along the line started calling Bill for help. Off he’d go to catch more rats in exchange for his treat.

Many times after heavy shelling from the enemy, Bill would lead the way with a medical attendant, crawling beneath tangled barbed wire to find the men who were wounded or dead in no man’s land and return them to Allied lines.

When the war ended, Bill joined my father in England, where Dad met and married my mother. Bill even attended their wedding ceremony on Nov. 11, 1918 (Armistice Day) before joining my parents aboard a troop ship bound for Canadian shores.

At the large apple ranch in Vernon, British Columbia, where I grew up, Bill kept up his hard work as our family dog. Once, when I disobeyed orders and slipped through the lattices of the fence to follow our ranch foreman into the orchard, Mother sent Bill after me.

I ran as hard as I could, then felt a tug on my coat. Bill stalled me until Mother was standing over me. From that day on, he followed me wherever  I went, acting as my protector.

When Bill died, Dad buried him on a hill overlooking a valley near our home. The location reminded him of an area in France crisscrossed by trenches, where Bill made so many friends. He placed a cross over the mound with the inscription “Here lies Bill, mascot of Company E, Royal Canadian Engineers, 1917-1925.”

MORE: This Stray Dog Will Remind You That Nothing’s Impossible