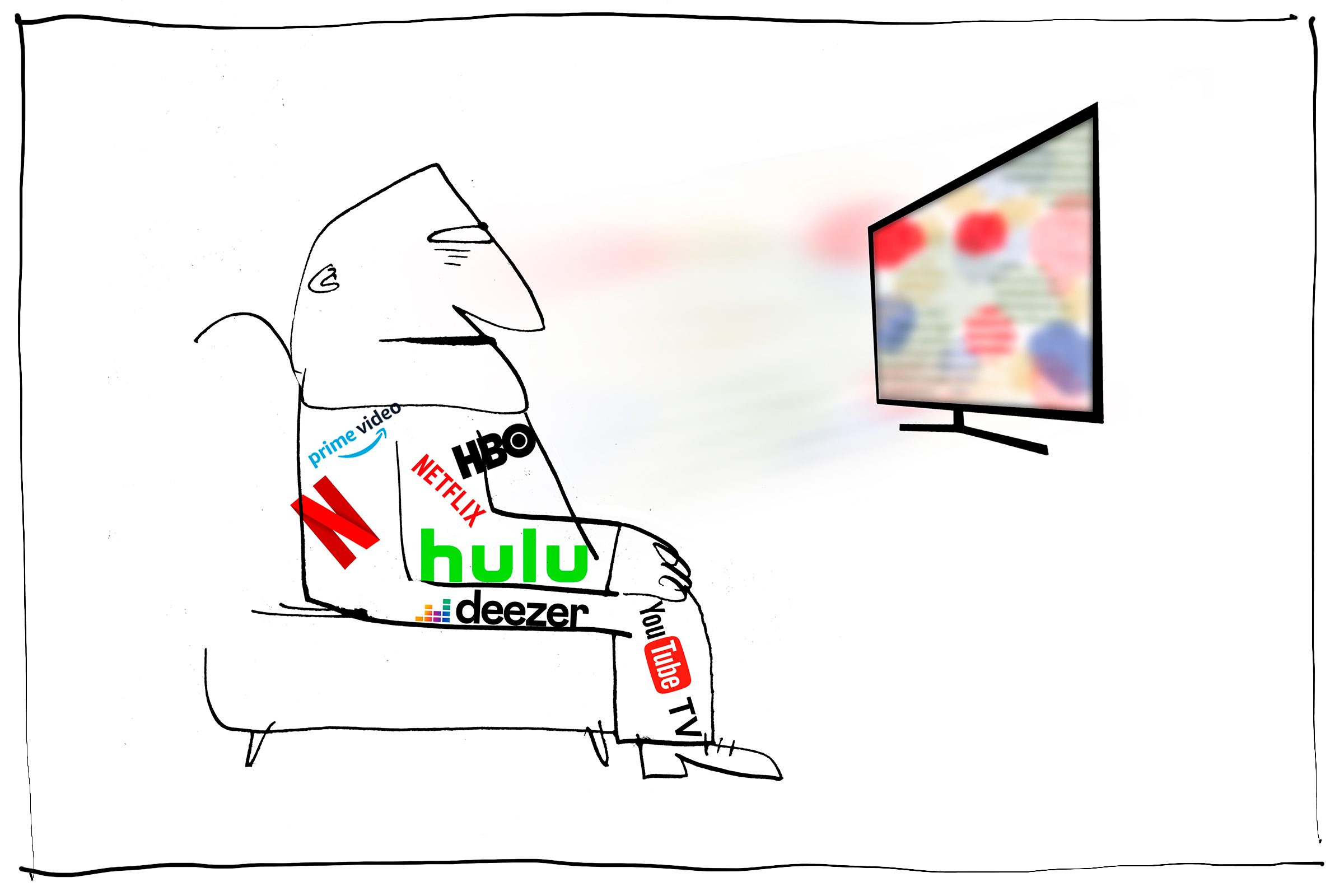 By 2017, more people were watching old episodes of the long-running hit NCIS on Netflix than the newest season on its home network, CBS. This past year, while Sunday Night Football, the most-viewed show on network television, averaged 20 million viewers a night, the debut of Netflix’s Tiger King drew more than 34 million viewers in its first ten days on the air.

With almost 200 million subscribers worldwide and a billion hours of content viewed each week, Netflix is by far the biggest paid service. No. 2 is Amazon Prime Video. But for every ­Goliath, there are a hundred Davids. Many smaller streaming services focus on niche programming, showing nothing but sports, classic movies, or ­Japanese anime.

The appeal is the low cost

In the early days of streaming, the appeal was the lower cost, and it still is. The average streamer spends $37 a month (and subscribes to three streaming platforms), while the average cable user pays more than $200 per month.

In 2019, Netflix raised the price of its basic service 12.5 percent, to $8.99 a month. A quarter of its subscribers, who have a history of protesting price increases, said they would cancel their subscriptions. Few did.

A major reason: Streaming networks have become home to many of the most acclaimed TV series, including recent Emmy winners The Marvelous Mrs. Maisel, Fleabag, and The Handmaid’s Tale. They offer full-length feature films as well, and last year, Netflix received more Oscar nominations than any other media company. In fact, streaming has changed the Oscar competition, at least for this year: Usually only films shown in theaters are considered, but ­because of the corona­virus, all movies released online in 2020 are eligible for the 2021 Academy Awards.

That shift was good news for Disney

Disney had to ditch its planned theatrical releases for two of its anticipated blockbusters, Hamilton and Mulan. Both are now on the company’s new streaming service, Disney+. But watching Mulan from the comfort of your own home will cost a hefty $29.99—on top of the service’s monthly fee of $6.99.

The competition for programming is fierce

Considering the money and prestige at stake, it’s no wonder that competition for programming is fiercer than the fighting in Game of Thrones. NBC paid $100 million to bring The Office to its new streaming service, Peacock, which is the new home for all shows and movies owned by NBCUniversal. ­WarnerMedia paid $425 million to get exclusive streaming rights to Friends for its HBO Max platform, which is also the only place to find all eight Harry Potter movies.

Some streaming services include an option to add live TV, but it drives up the price

A basic monthly Hulu subscription costs $5.99; with live TV, it jumps to $54.99. Services such as SlingTV offer cheaper packages with only a core group of popular channels. If you want to cut cable but are devoted to a particular network, sign up for its streaming service. Almost every network has one. Most are less than $10 a month.

Not sure whether a given service is worth the money?

Most offer 7- or 30-day free trial periods. (But be careful—they will automatically charge you the day your trial ends.) If you buy a new iPhone, iPad, or Mac computer, you get a free year of ­AppleTV+. Verizon unlimited plan holders get complimentary access to Disney+. And T‑Mobile offers its customers a year of Netflix and Quibi, a newer streaming app with shows designed for viewing on a phone.

Some services are free

There are free streaming services, such as Crackle, Tubi TV, and Xumo. They tend to have fewer titles to choose from—or make you sit through commercials. One exception: Kanopy, which doesn’t show ads and offers 30,000 films. You need a membership card from your local public library to sign up.

There’s an easy way to find your favorite titles

It’s hard to find your favorite shows when streaming platforms are rotating content like museum exhibits. But many smart TVs and media players such as Roku will find them for you. There are also free online databases, such as reelgood.com and justwatch.com, that can locate particular titles.

Too much streaming can get you into trouble, however

Nearly half of people who stream shows with their significant other admit to “cheating”—watching episodes ahead of the other person. As many as 60 percent of cheaters say they would cheat more often if they could get away with it.

And then there are those who binge-watch, a term Merriam-­Webster added in 2017 with the definition “to watch many or all episodes of (a TV series) in rapid succession.” Alejandro Fragoso of New York City holds the Guinness World Record for the longest binge-watching bender: 94 straight hours.

Where to Stream Movies When Netflix Won't Load

Signs Your Streaming Accounts Have Been Hacked

The Real Reason Ice Cube Trays Have Flat Spots on Them
Why Is Snooze Nine Minutes?
15 Everyday Items You Had No Idea Were Made By NASA