When Summer Found Its Place in My Heart

The cottage had been in our family for decades. But common sense said it was time to sell. 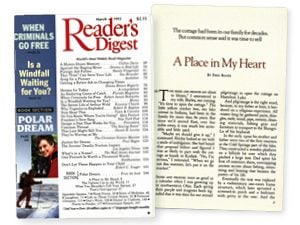 “The irises and peonies are about to bloom,” I announced to my wife, Shirley, one evening. “It’s time to open the cottage.” The little yellow cracker box, our lake retreat in Indiana, had been in the family for more than 80 years. But since we’d moved East, over 600 miles away, it was much less acces­sible and little used.

“Maybe we should give it up,” I continued. Shirley looked at me with a smile of indulgence. She had heard that proposal before and figured I was as likely to part with the cot­tage as kayak to Kodiak. “No, I’m serious,” I reiterated. “When we go out this summer, let’s put it on the market.”

Irises and peonies were as good as a calendar when I was growing up in northwestern Ohio. Each spring their purple and magenta buds sig­naled that it was time for our annual pilgrimage to open the cottage on Hamilton Lake.

And pilgrimage is the right word, because, to my father at least, it bor­dered on a religious experience. All winter long he gathered paint, shin­gles, nails, wood, pipe, cement, clean­ing materials, fishing gear and furniture to transport to the Shangri­ La of his boyhood.

In the early 1900s his mother and father were two of the first resorters at the Cold Springs part of the lake. They constructed a wooden platform on a hillside lot over which they pitched a large tent. Dad spent his first 18 summers there, unwrapping ancient secrets about fishing, swim­ming and boating that became the poetry of his life.

Eventually the tent was replaced by a rudimentary one-­room frame structure, which later sprouted a screened­-in porch and a bedroom with privy at the rear. And the Bauer cottage was born. Water was sloshed to the kitchen/bathroom/living room in a white porcelain pail from a pump down the hill. Kerosene lamps issued a smoky, wavering light. Ice was hurried in 25­-pound blocks from town two miles away. But no one complained. It was a family adventure, almost like camping out with amenities—if you call sleeping like peas in a pod on hardwood an amenity. (As a baby I was often stashed in a dresser drawer.)

In time I grew as addicted to the lake as my father was. With him coaching, I learned to swim my first stroke and hook my first catfish. The faded snapshots stored in my mem­ory show Dad and me, alone together, anchored off a blue­-green quilt of lily pads. It is early morning, misty and cool. But time and temperature are of no concern. That’s apparent from the contented smile on his angular face, framed by dark, wavy hair and a green twill work shirt with a turned­-up collar. As he makes a lazy cast, the sun’s warming rays hop­scotch across the rip­ply water and his frameless glasses.

“I think you’ve got a bite,” he whispers. “Tighten up your line, but don’t jerk.­ Let him take the bob­ber all the way down. There, you got him!”

“No, send him back to his mama. You’re gonna get one ten times his size.”


After we’ve boated a few modest­-sized sunnies, growling tummies com­plain for breakfast, and we row to shore. Then I run ahead with the stringer outstretched, eager to show our catch to Grandma, Grandpa and Mother.

“Fish for breakfast,” cheers Grandpa Bauer. “You’re a born fisherman. Get a picture of him.” A box camera is produced, and I pose proudly with my booty.

Memory lies that all this was only a summer or two ago. But my grand­parents died during World War II while my father was in the service, and the cottage came to him then.

After that, it got a face lift out­side and was modernized inside—running water, heat, refrigeration, and lights. I went off to college, married, and had children. Soon, another generation fell in love with the lake.

“Watch me go down head first,” my son Steve shouts to his sister, Laraine, at the swimming hole. He climbs the ladder leading to the top of a spinning water wheel that propels its riders forward. “Geronimo,” he war­-whoops, hurtling into the deep. At the instant that the lake swallows him, Laraine surfaces corklike near the ladder and prepares to take Steve’s place on the wheel. The dizzying cycle is repeated again and again. One departs, another arrives.

Before all four of my children arrived, however, Dad died, and Mother was designated custodian of the cottage. Meanwhile, I moved far away. Oh, we still spent a few days at Hamilton Lake each summer, but it wasn’t the same for us or Mother. My brother and his family didn’t use the place much, and like us, my sister and her family had pulled up roots. After a few years, Mother wearied of the upkeep, and the mantle was passed to me.

Shirley and I dutifully returned for a week or so each summer to clean walls, repair screens, replace chairs, fix roofs, paint. The hitch: it was all restoration and no rest. By the time the yellow cracker box was shipshape, we had to head home. Finally, like my mother, I concluded it was no longer worth it.

That year Shirley and I spent a week getting the place ready for one last family fling before putting it on the market. The boys, Steve, Christo­pher and Daniel, arrived in fast suc­cession, followed by their sister, Laraine, and her family. With our whole noisy clan on the premises, laughing and joking and teasing, it reminded me of old times. Don’t get sentimental, I told myself. You know what you must do.

But it wasn’t going to be easy. One day Jessica, our first grandchild, wanted to know why the water tasted so funny.

“Because it contains a lot of iron,” I explained. “Did you know that the cottage didn’t have running water or lights or a refrigerator or television for many years?

“We played cards or Chinese checkers, or listened to records on a wind­up Victrola,” I said. “And we read books.”

“But you didn’t have light,” she cross­-examined.

“We had kerosene lamps,” I said, showing her one of my grandmother’s ceramic lamps that had been con­verted from kerosene. And a pair of rusty ice tongs that my grand­father, my father and I had used to carry ice.

Another day I pulled out some of my dad’s old fishing gear. “Jes­sica,” I said, “I think it’s time you learned to fish.” She was apprehen­sive, but agreed to watch me. After digging some worms, we headed for the creek that empties into the lake, and set up shop at about the place where I’d caught my first fish nearly 50 summers before.

“First, we have to bait the hook.” I take out a wiggling night crawler and put it in place. “Then we throw it in and wait for the fish. Here, hold the pole for me.” Reluctantly, Jessica obliges. Within a couple of minutes, her bobber is dancing a jog.

“Take it,” she squeals, thrusting the pole toward me.

“No, pull it in yourself.” She raises the pole, and a small bluegill flops at her feet. Her eyes widen, and a big smile spreads across her face.

“Way to go, Jessica,” I applaud. “You are now a fisherwoman.” I remove the fish, toss it back and bait her hook again. This time she casts it in without hesitation, and I can tell by the expectant set of her jaw that another fan of the lake is incubating.

It’s funny, but after that week of family renewal, the subject of selling the place didn’t come up again. A year later, Jessica’s sister Ashley caught her first fish at the creek, and shortly after that her brother David did the same. Every spring—about the time the irises and peonies don their best bib and tucker—our kids and grand­kids begin making plans to check in at the cottage for at least a few days. Hauntingly, I’m called back to my first nesting, a migrating swallow. And like a bird, I return for reasons I don’t completely understand.

“Why do you want a vacation home so far away?” a friend asked me recently.

“I don’t,” I told him. Owning a long-­distance lake cottage makes about as much sense as barking at the moon. But it doesn’t have any­thing to do with common sense. The cottage isn’t just a place in Indiana. It’s a place in my heart.

25 Best Valentine’s Day Flowers to Wow the People You Love
A Bear Followed Me on a Camping Trip—And We Developed a Real Friendship
This Pilot Took Off Just Fine, But When He Tried to Use the Control Stick, It Wouldn’t Budge