After a severe COVID-19 diagnosis, a personal trainer is left in a wheelchair after having his right leg and left toes amputated due to blood clots. However, he's recovering from coronavirus and is hoping to walk again after he gets his prosthetic.

Gibby Cohen, now 77, and his wife, Patti, were personal trainers long before it was even a thing. The duo opened their first training studio, Polygym, in New York City in the early 1980s and helped elite athletes, dancers, and other professionals achieve their fitness goals. Forty years later, they are still in the business and teach in the Dance Division of The Juilliard School, the prestigious performing arts school in Manhattan.

Cohen didn’t just coach; he actively trained until he was diagnosed with COVID-19, the disease caused by the novel coronavirus SARS-CoV-2. In fact, he’d just completed a heavy training program and assumed his fatigue and body aches were due to the aggressive nature of the regimen. He was wrong.

After a 55-day stay at NYU Langone hospital, Cohen is finally home with his wife. His lower right leg was amputated and he lost all the toes on his left foot as a result of this “crazy disease.”

“I was never sick in my life before this,” says the Nashville native and devout vegan. “It changed my whole life. I am in a wheelchair now and I can’t do anything.” Cohen is not giving up by any stretch. He still trains his upper body for hours every morning and is now being fitted for a prosthetic for his lower leg and toes. These uplifting stories of neighbors helping during coronavirus will inspire you to do the same.

The ordeal started after he completed a tough training regimen. “I knew I would be tired over the weekend. Monday came and I am usually OK by Monday, but I was still under the weather and by Tuesday, I felt much, much worse.”

Cohen had a persistent fever, no appetite, and felt incredibly weak. This was in April, during the height of the pandemic when New York City was considered its epicenter. His doctor suggested he go straight to the emergency room, where he was soon admitted and diagnosed with COVID-19.

And things quickly went from bad to worse.

He is a bit hazy on some of the details. “I was getting delirious,” he recalls. Cohen was put on oxygen to help his labored breathing but refused a ventilator. “They gave him as much oxygen as they could give him,” his wife Patti says.

COVID-19 ravaged his body and caused blood clots that blocked the flow of oxygen-rich blood to his lower leg. This condition is known as arterial thrombosis. Cohen also developed gangrene on his left foot from lack of blood flow. Gangrene often turns the affected skin greenish-black.

Cohen’s surgeon made every effort to save his right leg in a procedure that lasted six hours, but he was unable to do so. “He told us the outcome would have been even worse if Gibby had not been in such great shape before becoming sick,” his wife says. Beware of these coronavirus symptoms everyone should watch for.

Occurrence of limb loss during COVID-19

His scenario was not uncommon in cases of severe COVID-19, especially in the early days of the pandemic, explains Allan M. Conway, MD, a vascular surgeon and program director at the vascular surgery residency program at Lenox Hill Hospital in New York. (He was not involved in Cohen’s care.)

When there’s a lack of blood flow to the limbs due to COVID-19, patients are more likely to have limb loss and multiple blood clots than people the same age with the condition who do not have COVID-19, according to a July study published in Radiology. Arterial thrombosis was more likely to be life-threatening for COVID-19 patients when the blood clots in the leg were coupled with lung issues and other symptoms, the study’s findings revealed.

“Patients who had severe disease and developed clots that blocked circulation to the legs and arms with COVID-19 risked the viability of the limb due to lack of oxygen,” Dr. Conway says. “In many cases, these patients were so sick and their lack of oxygen so severe that there was no way of salvaging the limbs.”

It’s the inflammation and severe immune system reaction kick-started by COVID-19—which is known as a cytokine storm—that increases the risk for blood clots, he says. This severe immune system reaction occurs when the body releases a host of inflammatory proteins called cytokines. Here’s what people who were infected with coronavirus want you to know.

Now that medical professionals have more experience with how COVID-19 behaves, they are able to intervene earlier and more aggressively with blood thinners to prevent clots from forming in the first place and hopefully avoid amputations, Dr. Conway says.

“We now use higher doses of blood thinners, and the whole medical team, from physicians and nurses to other care providers, are tuned in to be on the lookout for patients who were developing clots,” he says.

Things were so dire for Cohen at certain points that the hospital staff called his wife to say the end was near and that she could come in and say her goodbyes. “They were betting against me,” Cohen says.

He didn’t want visitors because he feared for their safety. “He said, ‘You are not coming. This place is a petri dish, and we have three daughters and six grandkids,’” Patti recalls. She also contracted COVID-19 but had a much milder case.

The family did talk on FaceTime the entire time Cohen was in the hospital. Thanks to a program called FamilyConnect at NYU Langone, the family was kept in the loop by a medical student who was in touch with his physicians on a daily basis. Here’s when it could be safe to see the elderly members of your family. 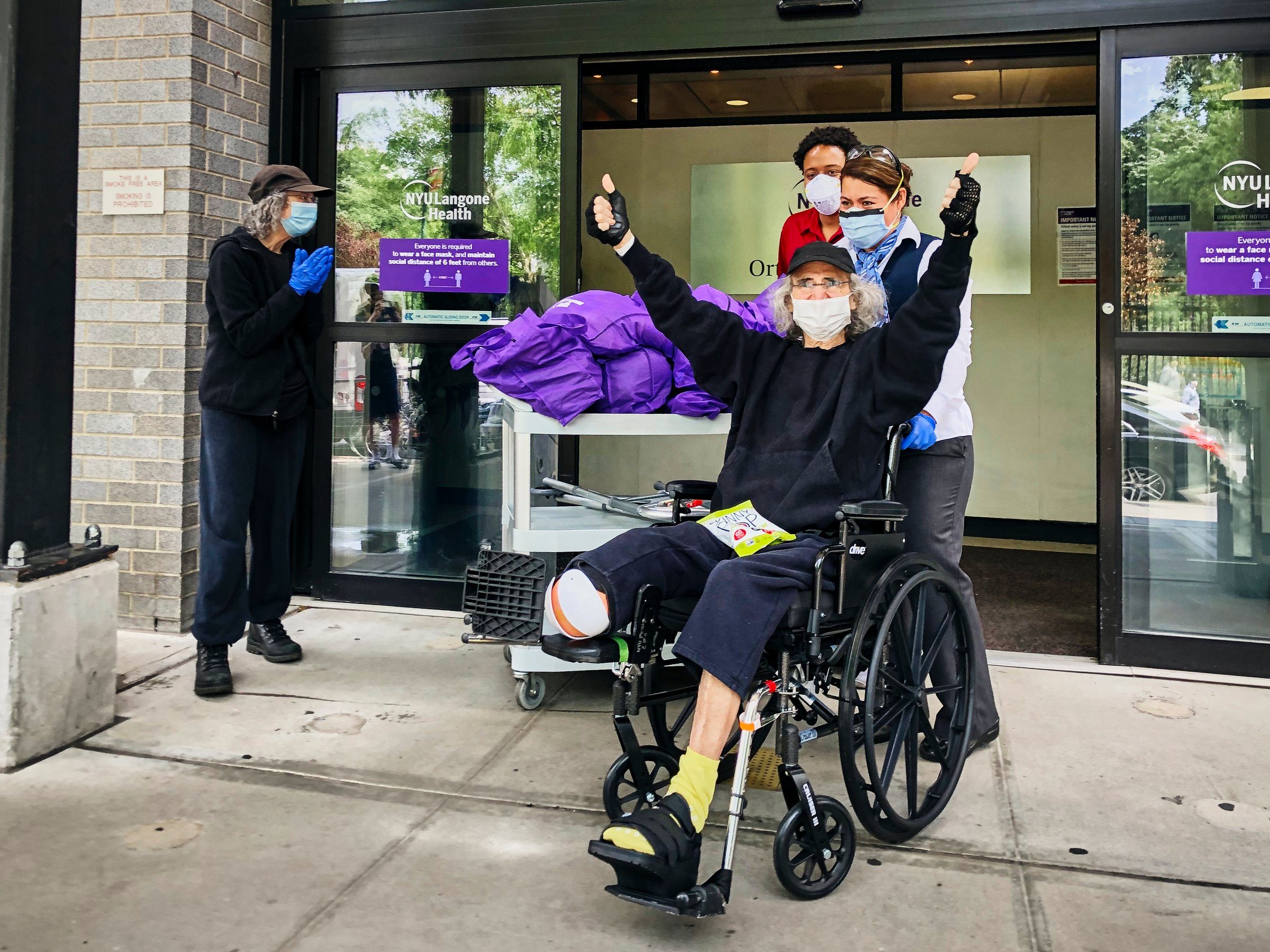 After 51 years of marriage, these 55 days were the longest the couple had ever been apart. “It was really traumatic,” she says. When her husband was finally released, Patti was shocked at the sight of him. “I wouldn’t even say skinny. I’d call him bony.”

It wasn’t over after he was released. Cohen’s doctor thought that he would need to amputate the left foot as well, but they decided to watch and wait after his release. His wife arduously massaged the foot using CBD oil and a traditional Chinese medicine technique known as moxibustion that applies heat near the skin to boost circulation.

And it worked. “We went back to see the doctor and he said, ‘Whatever you are doing, you did a great job,’” she recalls. While his foot was saved, the toes needed to be removed.

While he is doing much, much better, and getting stronger every day, Cohen says that there are some lasting and new COVID-19 symptoms. “I can’t remember simple words and I get fatigued very easily,” he says. “I haven’t been able to concentrate on an entire article since I got out of the hospital,” says the avid reader.

“My eyesight gets fuzzy, I am losing hair by the handful, and have an itch all over my body,” he adds. His hearing has also gotten worse. Cohen attends a weekly virtual peer group of COVID-19 survivors, and many are experiencing these same lasting or new symptoms.

Still, he’s happy he is alive and hopeful that once he gets his prosthetic, he will walk again. Next, here’s what this coronavirus survivor wants you to know.

How Soon Will We Have a COVID Vaccine?

Can You Find the Hidden Objects in These Pictures?
What It Was Like to Escape a Wildfire In the Middle of the Night
How a Boy Scout Nearly Drowned to Fight Racism in His Troop