This Surfer Punched a Shark to Save His Friend

A tiger shark out for blood is no match for cowboy surfer Brian Wargo. 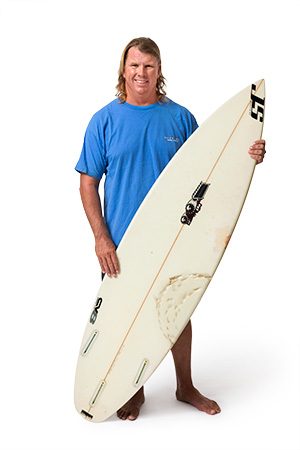 The bright morning sun glistened off four- and five-foot waves as old friends McKenzie Clark and Brian Wargo slid their surfboards into the warm water and paddled out to sea. It was Halloween 2014, in Hawaii’s Keawaeli Bay.

About 400 yards from shore, McKenzie’s board hit what she thought was a rock. When she looked down, instead she saw the outline of a shark easily 12 feet long. She screamed as she felt the board rise, the shark’s body breaching the surface. “I was perched on its head and getting pulled out to sea,” says McKenzie, 35. From where he sat on his board about 20 feet away, Brian, 45, saw the tiger shark. As an avid outdoorsman, he knew the species was aggressive and paddled frantically toward his friend.

Before Brian reached McKenzie, the shark slipped beneath the water, leaving her crouched on the surfboard, gripping its side with her left hand. Seconds later, the shark rocketed to the surface and bit into the surfboard, pinning McKenzie’s hand to the board. As she jerked it free, the momentum caused her to topple backward into the water, still tethered to the board by her ankle leash. The shark took off again toward open water, the surfboard still in its mouth.

Brian watched helplessly as McKenzie flew up and down in the water. Then the shark released the board, and Brian paddled toward his friend.

Blood gushed from her left hand as McKenzie desperately fumbled to remove the leash from her ankle. In the distance, Brian saw the shark’s dorsal fin reverse course. “He’s coming back,” Brian yelled to McKenzie. “Get on your board!”

On its way in McKenzie’s direction, the shark swam underneath Brian’s board, and when the shark’s dorsal fin appeared above water, Brian grabbed it. With his left hand holding onto the fin, Brian punched the shark in the gills with his right fist several times. On the fifth punch, “the shark shuddered,” Brian says, and swam back out toward open water.

“Are you OK?” Brian called out.

“He bit my fingers off!” McKenzie responded from atop her surfboard, which now bore three sets of teeth marks.

Two other surfers heard the yelling from about 100 yards away and swam over to help. They escorted Brian and McKenzie to shore, keeping watch in case the shark returned.

Back on dry land minutes later, the men fashioned a tourniquet out of the top of McKenzie’s wet suit to curb the gush of blood from her left hand, and the four of them climbed up a cliff to the parking lot.

Brian drove McKenzie to North Hawaii Community Hospital, about 25 miles away, where doctors removed part of her left ring finger and repaired damage to her hand with about 20 stitches.

McKenzie realizes how lucky she was that her friend was there to help. For his part, Brian says he acted on instinct. “I knew what I had to do to save my friend,” he says.