Survivors of the USS Indianapolis  spent days bobbing in the sea enduring sharks, blistering sun, and dehydration. How they conducted themselves in the water and afterward is an affirmation of life. 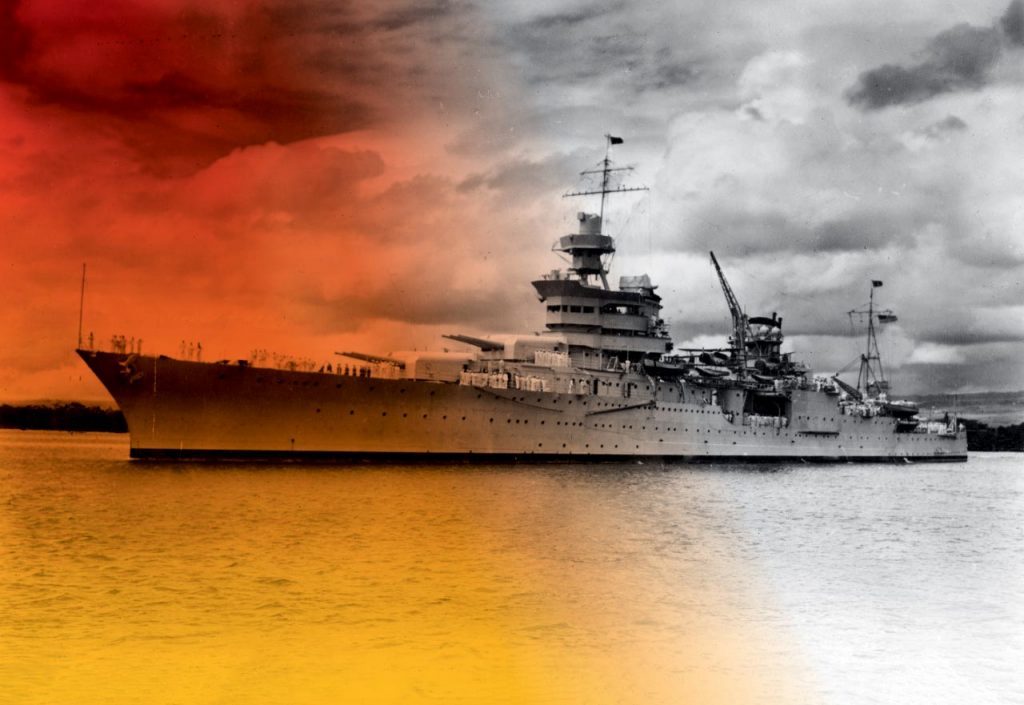 Each summer, as Lake Michigan finally begins to warm, I think of the men of the World War II cruiser USS Indianapolis and the worst disaster at sea in U.S. naval history. I go down to the lake and I wonder: How would I have survived what they experienced?

I don’t know the answer, but it’s the asking of the question that helps me recalibrate what could be called my moral compass.

On July 30, 1945, just over a month before the end of the war, the ship was torpedoed by a Japanese submarine in the Philippine Sea. It sank in 12 minutes. Of the 1,195 men on board, only 316 were alive when help arrived four days later. Headlines of the disaster deeply disturbed Americans: How could this have happened so close to the war’s end?
Today, only 12 of those men are still living, and each July they meet in Indianapolis for a reunion, as they have periodically since 1960, to gather around memories of shipmates who were lost at sea and those survivors who have recently passed away.

According to the Department of Veterans Affairs, about 16 million Americans served in World War II, and of those, about 497,000 are with us today, in our neighborhoods, at our grocery stores, and at family gatherings. Around 350 are dying each day, meaning that sometime within this generation, all will be deceased.
I suspect that we’ll feel, then, that the 20th century has truly ended.

We’ll no longer be able to walk up to the gentleman we spy on our way to the dairy case, who is wearing a hat bearing the insignia of a World War II unit, and shake the hand of someone who fought Hitler.

When I first met the survivors of the Indianapolis in 1999 while writing a book about them, their story, the last major action of World War II, was rarely mentioned in high school textbooks. This is despite the fact that before its torpedoing, the ship had delivered components of the atomic bomb Little Boy to Tinian Island. The bomb parts were packed in a plywood case whose contents the sailors tried vainly to guess, having no idea their ship was delivering the atom to modern warfare.

As the men floated in the sea, they were blinded by sun; hounded by hallucinations, thirst, and hunger; attacked by sharks; and beset, finally, by the realization that no one was coming to rescue them. Some of them purposefully swam away to die, feeling all hope was lost. Others surrendered to the moment but did not give up, an important distinction. While still certain that rescue would never come, they carried on, assisting struggling shipmates even when it didn’t seem to matter. By becoming selfless, they apprehended who they were as individuals.

When they were miraculously rescued, having been spotted by a 24-year-old pilot named Chuck Gwinn, whom in later years they affectionately called their angel, they felt they had been reborn. The second half of the 20th century was powered by this restless energy, possessed by millions of other Americans also returning from war. When I ask the survivors about this ordeal’s effect on their lives, they consistently remark that since their rescue, they’ve “never had a bad day.”

Reflecting on their struggle to survive feels instructive. When I look at Lake Michigan each July, I imagine the men of the Indianapolis visible on the horizon: dark heads, struggling arms, a cry and whirl of a world being remade. I feel an overwhelming sense of sadness, accompanied by a desire to yell out that they will be rescued. At the same time, I know that many were rescued. But the sadness always comes.

What I feel I’m watching, in my mind’s eye, is the work of people struggling to stay alive and, in the process, struggling with what it means to be a moral person, even after they emerged from the crucible of the sea.

Capt. Charles McVay of the Indianapolis was court-martialed, making him the only captain in American history to be court-martialed for losing his ship in an act of war. Giles McCoy, a founder of the USS Indianapolis Survivors Organization, promised his captain that the Navy would exonerate him one day. But in 1968, outside his stately home in Litchfield, Connecticut, Captain McVay took his own life.

The survivors and other advocates struggled for years to clear McVay’s name. When I asked McCoy why his shipmates stood behind the captain, he said, “The skipper never blamed anyone but himself.” This is despite the fact that the Japanese submarine commander who had sunk the ship, Mochitsura Hashimoto, testified during the court-martial that there was nothing McVay could have done to stop it.

McVay, steadfast in his own moral universe, believed otherwise. Forgive yourself, we want to say, but we know he won’t. His sense of duty was profound, and the survivors’ ­efforts to clear his name can be heard as an elegiac counterpoint to his suffering. Finally, on July 13, 2001, 56 years after the ship’s sinking, the Navy ­announced that McVay was not ­culpable for the disaster.

Last night I swam out beyond the buoys, looked up at the sky, and felt the dark, pliable hand of the night water take hold. I do this every year: Five minutes floating alone in the dark, unable to touch bottom, is the barest glimpse of the ordeal that those 316 men of the Indianapolis survived. But I recommend it.

Swim out where the bottom swoops to the deep and dog-paddle. Even though you’re certain you’re safe, the mind skips a beat. I promise, you’ll tell yourself: Tomorrow will be a good day.