As a child, I had a humiliating experience on February 14. Now that I’m a teacher, my students celebrate the day with love.

“I’m going to tell you a story,” I tell my class of high school seniors.

All eyes look up. Nothing quiets a chatty group of teenagers faster and causes them to put down their phones more effectively than the promise of a story.

“It’s a tale about love. And heartbreak.” I pause for dramatic effect. “And humiliation.”

Their eyes widen. I add the clincher. “Mine.” Now I have them.

This is a story I’ve told every February since I started teaching in 1999. Its power lies, I think, in how it changes the way my students see me. Gone temporarily is whatever omnipotence I command as their teacher. Left behind is an 11-year-old girl whose feelings are crushed—and each of them is outraged by the brutality of the one who did the crushing.

“In sixth grade,” I begin, “I fell madly in love. His name was David. He was tall, cute, kind of a bad boy—which I found tantalizing. He had no interest in me at all, but I doodled his name all over my diary. Wrote DT loves MM in giant hearts. You get the idea.”

They get the idea. The girls are laughing—and remembering.

“So it was Valentine’s Day, elementary school style. Construction paper mailboxes. Someone’s mom brought in cupcakes. Our parents bought us those variety-pack valentines to send to everyone in class. Dreadful things with corny sayings like ‘Bee My Honey’ and ‘I Gopher You!’ ”

All of them are laughing now. “It was party day. I spilled my cards onto my desk, and amid many small envelopes, I saw one enormous one, spangled with glitter. My mind raced: ‘Wow—someone likes me enough to buy me this giant valentine. Who could it be from?’ With trembling hands, I tore open the envelope and drew out a sparkly image of a queen seated on her throne. The heading read, ‘To a Queen of a Valentine.’ ”

I give the class a meaningful look. “I was swooning with excitement. Slowly, I turned the valentine over, and at the bottom I saw the signature and almost fainted: David. It was all too perfect to be real.

“Then my eyes traveled up to the writing above his signature. In large, uneven letters, he had written me a special message.”

My students lean in, waiting. You could hear a pin drop.

There are audible gasps. Mouths drop open. Some look down at their desks, seemingly embarrassed for me.

“What did you do?” asks a brave soul.

“What do you think?” I say. “My eyes filled with tears. My nose was stinging, my cheeks burning. I was devastated—and so afraid that he and his friends were watching me, eager to see how I would react.”

“Well, it ruined Valentine’s Day for me. It shook what little faith I had in myself for a long time after. But I survived. And now I refuse to cede this holiday of love to the meanness of one rotten boy. Instead, it’s given me the motivation to undo the malice of David.” I smile.

“And that’s why we’re going to have a party. A party that celebrates kindness instead of cruelty.”

Their eyes light up. They are willing to let me take them wherever I am going. I hand out construction paper so they can make mailboxes.

“You don’t have to, but you’re welcome to decorate them. I have markers.” A few studiously cool boys refuse to do more than scribble their names, but most students cover theirs with hearts, swirls, and fancy lettering. I can attest that no one has more fun in school than an 18-year-old given permission to be ten again.

The night before the party, I cut pink paper into hundreds and hundreds of small squares. 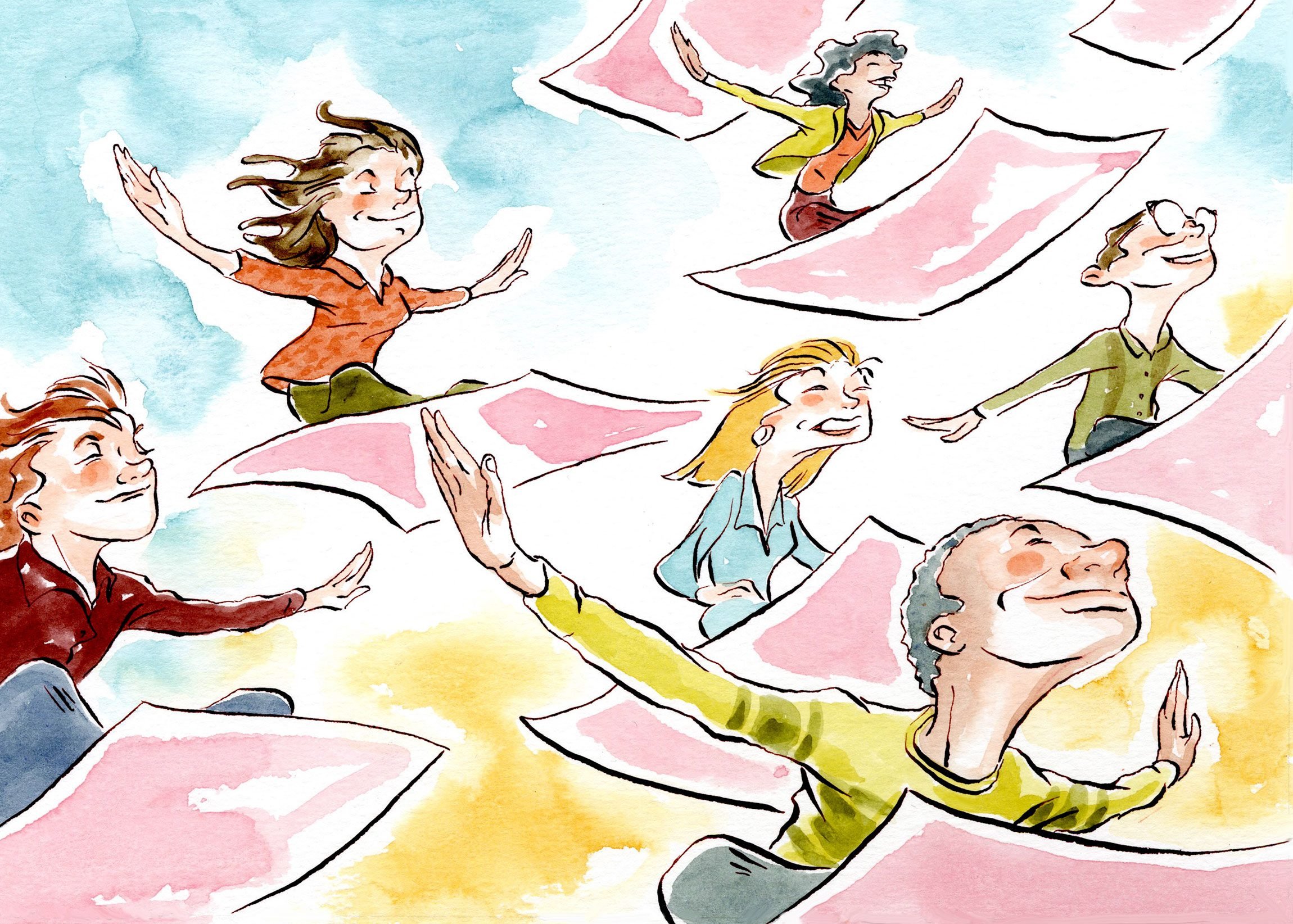 “What are we supposed to write?” someone asks when I distribute them. “Do we have to sign our names?” asks another.

“Of course you sign your names,” I say. “You’re not going to write anything you’re ashamed of, right? The objective is to write something positive and sincere to everyone in the class. Even if it’s someone you barely know, there’s always something nice to say. Admire their fashion sense or their skill at basketball. Remind them of something fun you remember about them from grade school.”

Looking on as they compose each message is always a treat. I play a mix CD of oldies and Motown love songs, and the vibe in the room is happy. Feet tap. Sometimes I can’t stop myself from dancing. But the real fun comes when they read what people wrote to them. Watching a shy kid tentatively open a card and then break into a big grin is worth all of the hassle.

A decade ago, one of my students, Julio, confessed to a girl named Rosa that he’d loved her since third grade. For months after that, they were a hand-holding, starry-eyed pair. But romances are rare, and not what matters to me. There are far better measures of success. Three years ago, a boy named Hal wrote me that I was the only one who had noticed when he was depressed a few months before and how much it had meant to him. Former students have shared with me that they have hung onto their valentines and sometimes read through them when they’re feeling low. Parents have e-mailed to tell me that the valentine exchange boosted their child’s self-confidence at a time when it was greatly needed. An especially sweet class had an artistic student draw me a valentine of a queen with the caption “To the Prettiest Girl in the Room,” and everyone signed it. That one still hangs next to my desk.

After 20 years of teaching, I harbor few hopes that students will retain all of the grammar or vocabulary I taught them. Maybe they will remember a book or two with some pleasure, or a fun and creative writing assignment. But if all a student recalls of one of my classes are the valentines they received one long-ago February, to me that makes it all worthwhile.

In recent years, the world that we inhabit has grown uglier—more divisive and unkind. Today there are bullies we contend with via social media who are far more powerful and corrosive than the childhood villain I remember so vividly.

Add to that the high-stakes push to achieve, to earn A’s, to get into a top college that dominates the lives of my current students, and they are left saddled with a level of stress far greater than anything I experienced decades ago. If, for one day a year, I can help them turn all of that off, if I can create an environment where they are intentionally kind to one another, then I count that as something to be proud of.

And whatever hurt David intended for me all those years ago, it has now been canceled out, many times over. I think he would be startled by his legacy.

For more from Melanie McCabe, buy her recently published book, His Other Life: Searching For My Father, His First Wife, and Tennessee Williams.

Powerful Kindness Quotes That Will Stay With You

Random Acts of Kindness for Every Month of the Year

Originally Published in Reader's Digest
washingtonpost.com (February 13, 2020), Copyright © 2020 by Melanie McCabe, author of His Other Life: Searching for My Father, His First Wife, and Tennessee Williams.

25 Best Women’s Winter Coats to Stay Warm and Stylish
The Greatest Gift This Dad Ever Gave His Daughter Will Definitely Make You Cry
My Dad Sent Me a Fruitcake Every Year for Christmas. The Last One Didn’t Arrive Until a Year After He Passed