The Funniest Fight Ever

Some guy was on his cell leaving a voicemail for his boss when he noticed a traffic accident. The following 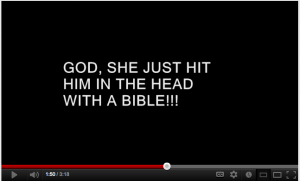 Some guy was on his cell leaving a voicemail for his boss when he noticed a traffic accident. The following is his hysterical play-by-play of the confrontation between an irate young guy and the equally angry elderly women whose car he bashed into. What makes it so funny is his I-can’t-catch-my-breath-because-I’m-laughing-so-hard depiction of what happened next.

The video’s a bit old, but it’s good enough that I shared it recently with a friend who was recuperating from a broken leg. He insists it’s a fake. He thinks it never happened and that the guy is making it up. I’m not so sure. I think my friend’s just cranky, what with having to stay home with nothing else to do but rain on my parade and watch General Hospital. But if he is right, the guy’s a brilliant actor, worthy of a listen. Enjoy.