For 50 years, Woody Davis was the ultimate good neighbor. Now he's getting the send-off of a lifetime.

I have been reporting on extraordinary people for 25 years as a television journalist, but this small Oregon town and the man at its center, Woody Davis, stand alone in my memory. When I read a newspaper clip about the community’s reaction to Woody’s declining health, I knew that this would be a special story for my CBS Evening News series, On the Road (the transcript of which is below).

But nothing prepared me for what happened when I traveled to Oregon last December and began knocking on doors. Every single person knew Woody and had countless stories to tell about his selflessness and generosity.

For five decades, he helped plow cars out of snow, chopped wood, repaired farm equipment, and more. He was the consummate good neighbor, and in his time of need, the community was rallying around him. I’d never seen anything like it.

Corbett, Oregon, December 2011
On a high ridge above the Columbia River, just down from heaven, you’ll find an angel on a front-end loader. Woody Davis, 69, is kind of a jack-of-all-trades. And although he’s never made much money at it, be all accounts, he has earned his wings.

Here is some of what people in town have said of him:

“He’s the epitome of something dear.”

“You have to chase him down to pay him sometimes.”

“He’s uncommon, he’s special, he’s a gift that this community has had all these years.”

Which is why folks in this small town east of Portland are now going out of their way to thank Woody for the thousands of good deeds he’s done for them over the past 50 years.

Recently, they all got together to cut and stack his firewood for winter. A couple of guys fixed up his old pickup. Someone even built him a beautiful wooden box and invited the whole town to sign it. “Did you know how much the community cared for him?” I asked Woody’s son, Clint.

Clint said all the work his dad did for people has been repaid tenfold. “Bill Gates could not come to Corbett and buy this. You can’t buy the love that people have poured out for Dad.” 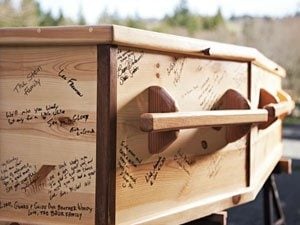 Their words and deeds are sincere and lasting. Unfortunately, the box is pine—and the outlook isn’t good. A few months ago, Woody was diagnosed with ALS—Lou Gehrig’s disease. Doctors tell him he has about six months. The disease, which attacks the nervous system, is already making it hard for him to lift much of anything or even talk. But his attitude remains unaffected. “What do you think of what everybody’s been doing for you?” I asked.

I really didn’t think I’d heard him right. “Wait, did you just say you feel blessed that you’re dying slowly?”

“Because people have a chance to express to me how they feel,” he said.

In most communities, death is whispered, and praised is saved for the eulogy. But Woody Davis and the people of Corbett, Oregon, show us why that may be too late. Turns out even angels like to know they’ve made a difference.