The Kindness of New Yorkers

Here’s one New York City police officer who just smashed the stereotype of the big city as cold and uncaring. 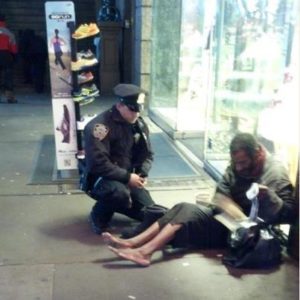 Here’s one New York City police officer who just smashed the stereotype of the big city as cold and uncaring. When officer Larry DePrimo, 25,  saw a homeless man walking in Times Square with no shoes,  he ran ahead of the man into a shoe store where he bought boots, then into a second store, where he purchased socks. The cop then circled back to the homeless man and knelt down to place the socks and boots on his feet.

DePrimo had no idea that Arizona tourist Jennifer Foster, who is a law enforcement veteran herself, snapped a photo and sent it to the NYPD, which posted it on Facebook.  The photo quickly racked up more than a half million likes and close to 200,000 shares. DePrimo has said he feels  privileged to be able to help, and has kept the receipt for the boots in his bulletproof vest as a reminder.

Here’s a news video of the officer talking about what happened.

Meanwhile, the New York Post reports that two New Yorkers who won lottery jackpots —including John Cimino, 67, who nabbed $33 million playing Mega Millions—have vowed to share some of that money with victims of Hurricane Sandy.

Sometimes the Big Apple has a big heart.