The Morning After: Best Debate Follow-Up

The verdict is in, and Mitt Romney gets the win. As we noted in a previous post, for all the 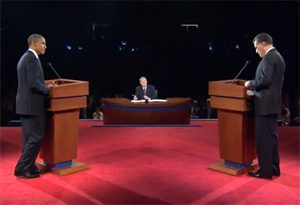 The verdict is in, and Mitt Romney gets the win. As we noted in a previous post, for all the attention they get presidential debates rarely have a significant impact on the election. But there’s no denying that Romney had a big night and President Obama came up woefully short in the first of their three clashes. We’ve combed through the mountains of morning-after analysis and commentary and picked four pieces that, taken together, cover the essentials in witty and insightful ways.

Leading off is this piece from factcheck.org, which nails both candidates for the many misleading statements they made in the course of their 90-minute exchange. As the editors put it, “We found exaggerations and false claims flying thick and fast…”

Over at Slate, David Weigel skewers the Obama team for their desperate efforts “in the big dumb swirl of a spin room” to re-frame the president’s poor performance as a success.

Finally, the editors of Bloomberg View have a smart take on what the win means for Romney and what he and Obama need to do in the days and weeks ahead. “As [Romney] basks in his victory this morning,” they write, “he should also note how he won: by playing more to the center than to the right, appealing more to reason than to partisanship.”

With 32 days until the election, the serious fun has just begun.